A pair of new papers report measurements of the Martian atmosphere’s composition by NASA’s Curiosity rover, providing evidence about loss of much of Mars’ original atmosphere. 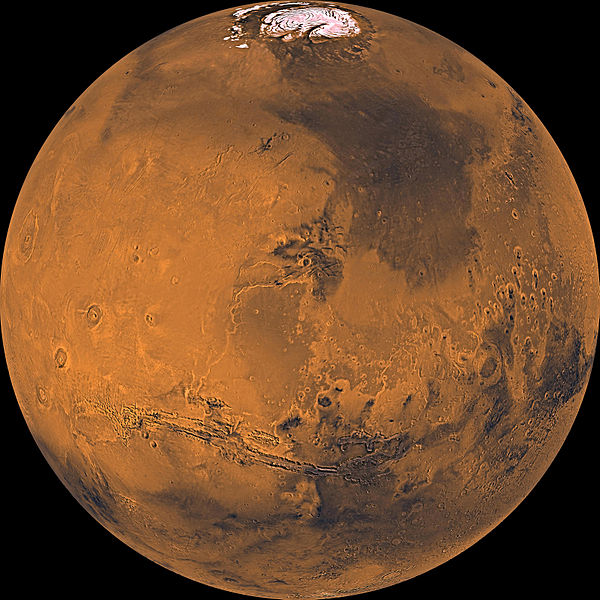 One of Vikings global mosaics of Mars, re-sized & sharpened by Jason Harwell of the Viking mission team. Image Credit: NASA/JPL

Curiosity’s Sample Analysis at Mars (SAM) suite of laboratory instruments inside the rover has measured the abundances of different gases and different isotopes in several samples of Martian atmosphere. Isotopes are variants of the same chemical element with different atomic weights due to having different numbers of neutrons, such as the most common carbon isotope, carbon-12, and a heavier stable isotope, carbon-13.

SAM checked ratios of heavier to lighter isotopes of carbon and oxygen in the carbon dioxide that makes up most of the planet’s atmosphere. Heavy isotopes of carbon and oxygen are both enriched in today’s thin Martian atmosphere compared with the proportions in the raw material that formed Mars, as deduced from proportions in the Sun and other parts of the Solar System. This provides not only supportive evidence for the loss of much of the planet’s original atmosphere, but also a clue to how the loss occurred.

“As atmosphere was lost, the signature of the process was embedded in the isotopic ratio,” said Paul Mahaffy of NASA Goddard Space Flight Center, Greenbelt, Md.  He is the principal investigator for SAM and lead author of one of the two papers about Curiosity results in the July 19 issue of the journal Science.

Other factors also suggest Mars once had a much thicker atmosphere, such as evidence of persistent presence of liquid water on the planet’s surface long ago even though the atmosphere is too scant for liquid water to persist on the surface now. The enrichment of heavier isotopes measured in the dominant carbon-dioxide gas points to a process of loss from the top of the atmosphere — favoring loss of lighter isotopes — rather than a process of the lower atmosphere interacting with the ground.

Curiosity measured the same pattern in isotopes of hydrogen, as well as carbon and oxygen, consistent with a loss of a substantial fraction of Mars’ original atmosphere. Enrichment in heavier isotopes in the Martian atmosphere has previously been measured on Mars and in gas bubbles inside meteorites from Mars. Meteorite measurements indicate much of the atmospheric loss may have occurred during the first billion years of the planet’s 4.6-billion-year history. The Curiosity measurements reported this week provide more precise measurements to compare with meteorite studies and with models of atmospheric loss.

The Curiosity measurements do not directly measure the current rate of atmospheric escape, but NASA’s next mission to Mars, the Mars Atmosphere and Volatile Evolution Mission (MAVEN), will do so. “The current pace of the loss is exactly what the MAVEN mission now scheduled to launch in November of this year is designed to determine,” Mahaffy said. This picture shows a lab demonstration of the measurement chamber inside the Tunable Laser Spectrometer, an instrument that is part of the Sample Analysis at Mars investigation on NASA’s Curiosity rover. This demonstration uses visible lasers – rather than the infrared ones on the actual spectrometer – to show how the lasers bounce between the mirrors in the measurement chamber. The TLS shoots laser beams into a type of measurement chamber that can be filled with Mars air. By measuring the absorption of light at specific wavelengths, the tool can measure concentrations of methane, carbon dioxide and water vapor in the Martian atmosphere and different isotopes of those gases. Image Credit: NASA/JPL-Caltech

The new reports describe analysis of Martian atmosphere samples with two different SAM instruments during the initial 16 weeks of the rover’s mission on Mars, which is now in its 50th week. SAM’s mass spectrometer and tunable laser spectrometer independently measured virtually identical ratios of carbon-13 to carbon-12. SAM also includes a gas chromatograph and uses all three instruments to analyze rocks and soil, as well as atmosphere.

“Getting the same result with two very different techniques increased our confidence that there’s no unknown systematic error underlying the measurements,” said Chris Webster of NASA’s Jet Propulsion Laboratory, Pasadena, Calif. He is the lead scientist for the tunable laser spectrometer and the lead author for one of the two papers. “The accuracy in these new measurements improves the basis for understanding the atmosphere’s history.”

Curiosity landed inside Mars’ Gale Crater on Aug. 6, 2012 Universal Time (on Aug. 5 PDT). The rover this month began a drive of many months from an area where it found evidence for a past environment favorable for microbial life, toward a layered mound, Mount Sharp, where researchers will seek evidence about how the environment changed.