News by Subject » Astrophysics » How pulsars slow down with age

Researchers at the University of Southampton have developed a model which explains how the spin of a pulsar slows down as the star gets older. 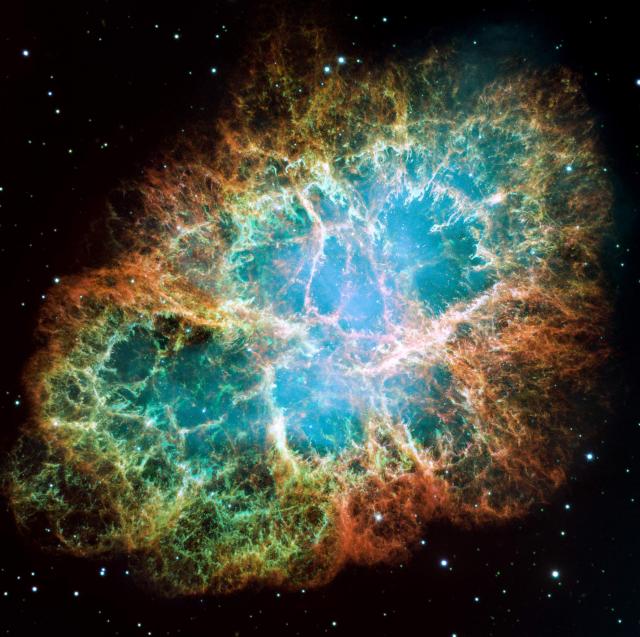 The famous Crab Nebula (M1, NGC 1952 or Taurus A) is the remnant of SN 1054, a pulsar wind nebula with a diameter of 11 light-years, located in the Perseus Arm of the Milky Way, about 6,000 light-years away in the Taurus constellation. The 958-year-old neutron star in the Crab Nebula is one of the best known pulsars. It rotates around its own axis 33 times every second and its magnetic field is over a trillion times stronger than that of Earth. This pulsar powers the surrounding nebula. Image Credit: NASA, ESA, J. Hester and A. Loll (Arizona State University)

A pulsar is a highly magnetised rotating neutron star which was formed from the remains of a supernova – an explosion which happens after a massive star runs out of nuclear fuel. A pulsar emits a rotating beam of electromagnetic radiation, rather like that of a lighthouse. This beam can be detected by powerful telescopes when it points towards and sweeps past the Earth.

Pulsars rotate at very stable speeds, but slow down as they emit radiation and lose their energy. Professor Nils Andersson and Dr Wynn Ho, from the University of Southampton,  have now found a way to predict how this ‘slowing’ process will develop in individual pulsars (1).

Nils Andersson comments: “A pulsar’s spin rate can be a very precise measurement of time which rivals the best atomic clocks, but in the end it will slow down. Until now, the nature of this slowing hasn’t been well understood, despite 40 years of research. However, our model will open the door on this process – extending our knowledge of how pulsars’ operate and helping to predict how they will behave in the future.”

As a hot pulsar cools, its interior increasingly begins to turn superfluid – a state of matter which behaves like a fluid, but without a fluid’s friction or ‘viscosity’. It is this change of state which gradually affects the way that the star’s rotation slows down.

“The effect on the star’s rotation is like a figure skater extending their arms to slow their spin,” says Wynn Ho. “Our model can explain the observed behaviour of young pulsars, such as the 958-year-old pulsar in the Crab nebula, which spins at 33 times a second.”

The Southampton scientist’s findings have important implications for the next generation of radio telescopes being developed by large international collaborations, like the Square Kilometre Array (SKA) and the Low Frequency Array (LOFAR), of which Southampton is a UK partner university. The discovery and monitoring of many more pulsars is one of the key scientific goals of these projects. Professor Andersson and Dr Ho’s mathematical model can be used in conjunction with these observations to predict how a pulsar’s rotation will change over time and enable scientists to peer inside these stars and explore their exotic composition.

“Our results provide a new method of linking the study of distant astronomical objects to laboratory work on Earth in both high-energy and low-temperature physics,” says Professor Andersson. “It is an exciting example of interdisciplinary science.”

(1) Pulsars are rotating neutron stars that are seen to slow down, and the spin-down rate is thought to be due to magnetic dipole radiation. This leads to a prediction for the braking index n, which is a combination of the spin period and its first and second time derivatives. However, all observed values of n are below the predicted value of 3. We provide a simple model that can explain the rotational evolution of young pulsars, including the n=2.51 of the 958-year-old pulsar in the Crab nebula. The model is based on a decrease in the effective moment of inertia due to an increase in the fraction of the stellar core that becomes superfluid as the star cools through neutrino emission. The results suggest that future large radio monitoring campaigns of pulsars will yield measurements of the neutron star mass, nuclear equation of state, and superfluid properties.

Source: The University of Southampton via AlphaGalileo