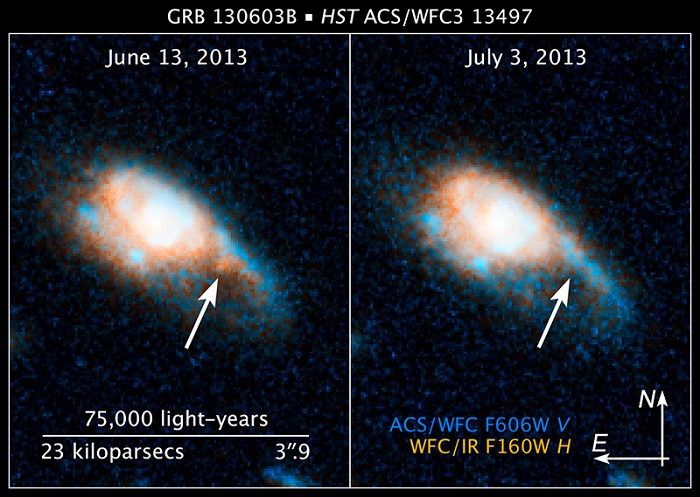 The evidence is in the detection of a new kind of stellar blast called a kilonova, which results from the energy released when a pair of compact objects crash together. Hubble observed the fading fireball from a kilonova last month, following a short gamma-ray burst (GRB) in a galaxy almost 4 billion light-years from Earth. A kilonova had been predicted to accompany a short-duration GRB, but had not been seen before.

“This observation finally solves the mystery of the origin of short gamma-ray bursts,” said Nial Tanvir of the University of Leicester in the United Kingdom. Tanvir lead a team of researchers using Hubble to study the recent short-duration GRB. “Many astronomers, including our group, have already provided a great deal of evidence that long-duration gamma-ray bursts (those lasting more than two seconds) are produced by the collapse of extremely massive stars. But we only had weak circumstantial evidence that short bursts were produced by the merger of compact objects. This result now appears to provide definitive proof supporting that scenario.”

A kilonova is about 1,000 times brighter than a nova, which is caused by the eruption of a white dwarf. The self-detonation of a massive star, a supernova, can be as much as 100 times brighter than a kilonova. Gamma-ray bursts are mysterious flashes of intense high-energy radiation that appear from random directions in space. Short-duration blasts last at most a few seconds, but they sometimes produce faint afterglows in visible and near-infrared light that continue for several hours or days. The afterglows have helped astronomers determine that GRBs lie in distant galaxies.

This sequence illustrates a model for the formation of a short-duration gamma-ray burst.
1. A pair of neutron stars in a binary system spiral together. Orbital momentum is dissipated through the release of gravity waves, which are tiny ripples in the fabric of space-time.
2. In the final milliseconds, as the two objects merge, they kick out highly radioactive material. This material heats up and expands, emitting a burst of light called a kilonova. An accompanying gamma-ray burst lasts just one-tenth of a second, but is 100 billion times brighter than the kilonova flash.
3. The fading fireball blocks visible light but radiates in infrared light.
4. A remnant disk of debris surrounds the merged object, which may have collapsed to form a black hole.
Image Credit: NASA, ESA, and A. Field (STScI)

Astrophysicists have predicted short-duration GRBs are created when a pair of super-dense neutron stars in a binary system spiral together. This event happens as the system emits gravitational radiation, creating tiny waves in the fabric of space-time. The energy dissipated by the waves causes the two stars to sweep closer together. In the final milliseconds before the explosion, the two stars merge into a death spiral that kicks out highly radioactive material. This material heats up and expands, emitting a burst of light.

In a recent science paper Jennifer Barnes and Daniel Kasen of the University of California at Berkeley and the Lawrence Berkeley National Laboratory presented new calculations predicting how kilonovae should look. They predicted the same hot plasma producing the radiation also will block the visible light, causing the gusher of energy from the kilonova to flood out in near-infrared light over several days. 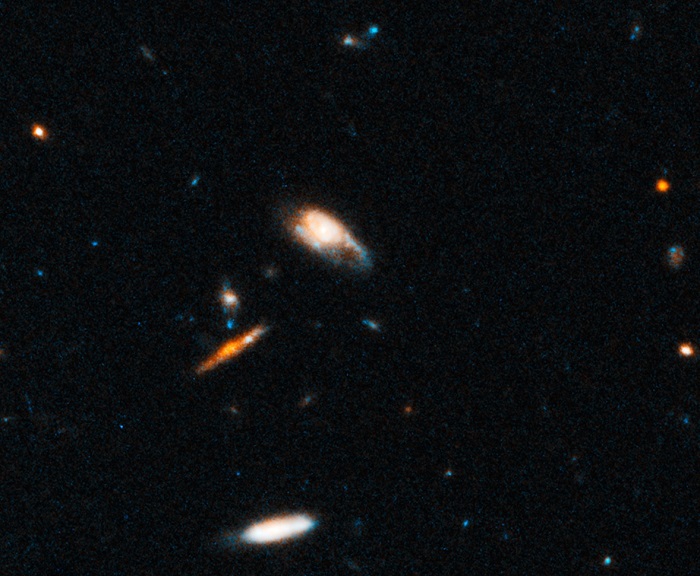 GRB 130603B Host and Surrounding Field. The galaxy just above the center produced the gamma-ray burst, designated GRB 130603B. The galaxy, cataloged as SDS J112848.22+170418.5, resides almost 4 billion light-years away. A probe of the galaxy with Hubble’s Wide Field Camera 3 on June 13, 2013, revealed a glow in near-infrared light at the source of the gamma-ray burst, shown in the image at top, right. When Hubble observed the same location on July 3, the source had faded, shown in the image at below, right. The fading glow provided key evidence that it was the decaying fireball of a new type of stellar blast called a kilonova. Image Credit: NASA, ESA, N. Tanvir (University of Leicester), A. Levan (University of Warwick), A. Fruchter (STScI), J. Hjorth (University of Copenhagen), R. Hounsell (STScI), K. Wiersema (University of Leicester), and R. Tunnicliffe (University of Warwick)

An unexpected opportunity to test this model came June 3 when NASA’ s Swift space telescope picked up the extremely bright gamma-ray burst, cataloged as GRB 130603B. Although the initial blast of gamma rays lasted just one-tenth of a second, it was roughly 100 billion times brighter than the subsequent kilonova flash.

From June 12-13, Hubble searched the location of the initial burst, spotting a faint red object. An independent analysis of the data from another research team confirmed the detection. Subsequent Hubble observations on July 3 revealed the source had faded away, therefore providing the key evidence the infrared glow was from an explosion accompanying the merger of two objects.

The team’s results has appeared Aug. 3 in a special online publication of the journal Nature: A ‘kilonova’ associated with the short-duration γ-ray burst GRB 130603B. Click here for the full article in PDF.