ESA’s Herschel space observatory has discovered enough water vapour to fill Earth’s oceans more than 2000 times over, in a gas and dust cloud that is on the verge of collapsing into a new Sun-like star.

Herschel’s infrared view of part of the Taurus Molecular Cloud, within which the bright, cold pre-stellar cloud L1544 can be seen at the lower left. It is surrounded by many other clouds of gas and dust of varying density. The Taurus Molecular Cloud is about 450 light-years from Earth and is the nearest large region of star formation. The image covers a field of view of approximately 1 x 2 arcminutes. Image Credit: ESA/Herschel/SPIRE
Stars form within cold, dark clouds of gas and dust – ‘pre-stellar cores’ – that contain all the ingredients to make solar systems like our own.

Water, essential to life on Earth, has previously been detected outside of our Solar System as gas and ice coated onto tiny dust grains near sites of active star formation, and in proto-planetary disks capable of forming alien planetary systems.

The new Herschel observations of a cold pre-stellar core in the constellation of Taurus known as Lynds 1544 are the first detection of water vapour in a molecular cloud on the verge of star formation.

More than 2000 Earth oceans-worth of water vapour were detected, liberated from icy dust grains by high-energy cosmic rays passing through the cloud.

“To produce that amount of vapour, there must be a lot of water ice in the cloud, more than three million frozen Earth oceans’ worth,” says Paola Caselli from the University of Leeds, UK, lead author of the paper reporting the results in Astrophysical Journal Letters.

“Before our observations, the understanding was that all the water was frozen onto dust grains because it was too cold to be in the gas phase and so we could not measure it. 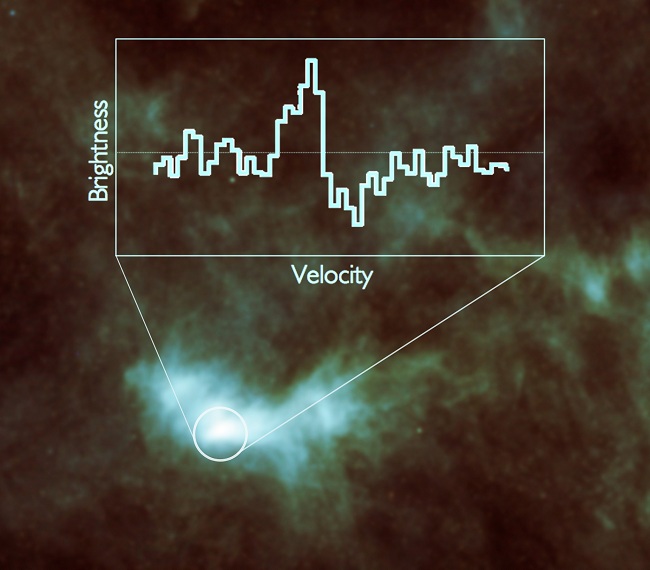 Close-up of L1544 with the water spectrum seen by Herschel, taken from the centre of the pre-stellar core. The peak of the graph shows an excess in brightness, or emission, while the trough shows a deficit, or absorption. These characteristics are used to indicate the density and motions of the water molecules within the cloud. Emission arises from molecules that are approaching the center where the new star will form, from the back of the cloud from Herschel’s viewpoint. The amount of emission indicates that these molecules are moving within the densest part of the core, which spans about 1000 Astronomical Units. The absorption signature is due to water molecules in front of the cloud flowing away from the observer towards the center  These water molecules are in less dense regions much further away from the center  Together, the emission and absorption signatures indicate that the cloud is undergoing gravitational contraction, that is, it is collapsing to form a new star. Herschel detected enough water vapor in L1544 to fill Earth’s oceans more than 2000 times over. Image Credit: ESA/Herschel/SPIRE/HIFI/Caselli et al.

“Now we will need to review our understanding of the chemical processes in this dense region and, in particular, the importance of cosmic rays to maintain some amount of water vapour.”

The observations also revealed that the water molecules are flowing towards the heart of the cloud where a new star will probably form, indicating that gravitational collapse has just started.

“There is absolutely no sign of stars in this dark cloud today, but by looking at the water molecules, we can see evidence of motion inside the region that can be understood as collapse of the whole cloud towards the center,” says Dr Caselli.

“There is enough material to form a star at least as massive as our Sun, which means it could also be forming a planetary system, possibly one like ours.”

Some of the water vapor detected in L1544 will go into forming the star, but the rest will be incorporated into the surrounding disk, providing a rich water reservoir to feed potential new planets.

“Thanks to Herschel, we can now follow the ‘water trail’ from a molecular cloud in the interstellar medium, through the star formation process, to a planet like Earth where water is a crucial ingredient for life,” says ESA’s Herschel project scientist, Göran Pilbratt.

“First detection of water vapour in a pre-stellar core,” by P. Caselli et al. has been accepted for publication in Astrophysical Journal Letters.