NASA is scheduled to launch an orbiting X-ray satellite on Wednesday (June 13) that will open a new window on the universe, allowing scientists to probe the roiling edges of black holes, the turbulent outflow from exploding stars, and the smallest, most frequent flares on the sun.

The Nuclear Spectroscopic Telescope Array, or NuSTAR, is the first orbiting satellite to produce sharp images of high-energy X-rays produced by explosive events and extreme objects such as black holes and neutron stars.

“We believe most, if not, all galaxies have a massive black hole at their center, but a lot of these are hidden from the view of optical and normal X-ray telescopes by gas and dust,” said Steve Boggs, University of California, professor of physics and a co-investigator for the NuSTAR mission. “This thwarts our ability to understand the nature of a majority of the black holes that are feeding from their host galaxy. By using high-energy X-rays, the properties of these black holes will be revealed.”

NuSTAR’s instruments were designed and built by scientists at the California Institute of Technology (Caltech), UC Berkeley and other institutions, and will be operated by scientists at UC Berkeley’s Space Sciences Laboratory. The instruments can detect X-rays with energies up to 10 times those detectable by NASA’s orbiting Chandra X-ray Observatory, and do something no X-ray telescope currently does: focus these high-energy X-rays to form an image.

NASA’s NSTAR X-ray observatory will study black holes, the remains of exploded stars and other high-energy, cosmic objects. This animation depicts NuSTAR in space, as it orbits around Earth’s equator. Credit: NASA/JPL-Caltech

“NuSTAR will create images 10 times crisper and 100 times more sensitive than any other telescopes observing in this region,” said Fiona Harrison, principal investigator for the mission and a professor of physics and astronomy at the California Institute of Technology. “This will enable NuSTAR to study some of the hottest, densest, most energetic phenomena in the universe.”

NuSTAR, about the size of a refrigerator, is now loaded aboard a Pegasus XL rocket that is strapped beneath an L-1011 “Stargazer” carrier aircraft on Kwajalein Atoll in the central Pacific Ocean. At about 8:30 a.m. PDT (11:30 a.m. EDT) Wednesday, at a height of 39,000 feet, the plane will drop the rocket, which will ignite its engines to carry NuSTAR into an equatorial orbit about 375 miles above Earth.

While visible light is easily focused by mirrors, X-rays are not: they penetrate mirrors except at very glancing angles. NuSTAR scientists developed nested shells of 133 mirrors that are almost, but not quite, parallel to the incoming X-rays. The X-rays skip off the mirrors and come to a focus on detectors about 33 feet away.

“This new type of X-ray telescope enables some truly exciting science,” said UC Berkeley’s Bill Craig, instrument manager for NuSTAR. “It took a large international team many years to perfect this technology, and it is great to finally get an instrument of this type in orbit.” 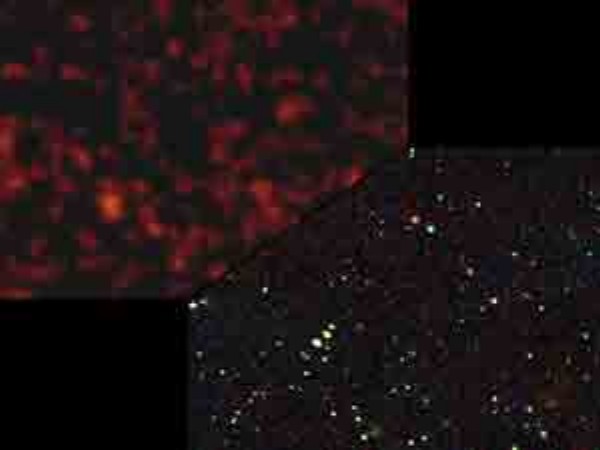 Galactic X-ray emissions as seen today by the INTEGRAL spacecraft (left) and a simulated view of what NuSTAR will see at comparable wavelengths. Image credit: ESA/NASA/JPL-Caltech

Because the satellite had to be compact for launch, it incorporates an extendable mast that is collapsed during launch but, after reaching orbit and following system checkout, will deploy in 56 locking stages to a length of 10 meters, providing a precise focal separation between the mirrors and the detectors. NuSTAR has two nested sets of these mirrors to improve detection at the full range of high-energy X-rays. The mast will unfurl about seven days after launch; science operations will begin about 23 days later.

Aside from surveying massive black holes in the universe, NuSTAR also will focus on the remains of supernovas in the Milky Way Galaxy that exploded within the last several hundred years. By analyzing the high-energy X-rays emitted by radioactive nuclei in the expanding debris, scientists hope to reconstruct the reactions that took place in the exploding star.

“The type and number of nuclei we see today are fingerprints of what happened deep in the core of the explosion, and they allow us to go back and deduce the underlying explosion physics that we don’t have access to in labs on Earth,” Boggs said.

NuSTAR’s unique ability to focus high energy X-rays will also allow solar physicists to study explosive events on the sun, such as coronal mass ejections and micro- and nanoflares that are believed to pepper the sun’s surface and heat its atmosphere.

Source: the University of California