A team of scientists from six European countries reported on November 1, 2012 they have finalized a thirty years long investigation of a hypergiant star that crossed the Yellow Evolutionary Void. In that period the star’s surface temperature quickly rose from five to eight thousand degrees. With this discovery a crucial ‘missing link’ in the evolution of hypergiant stars has been found. 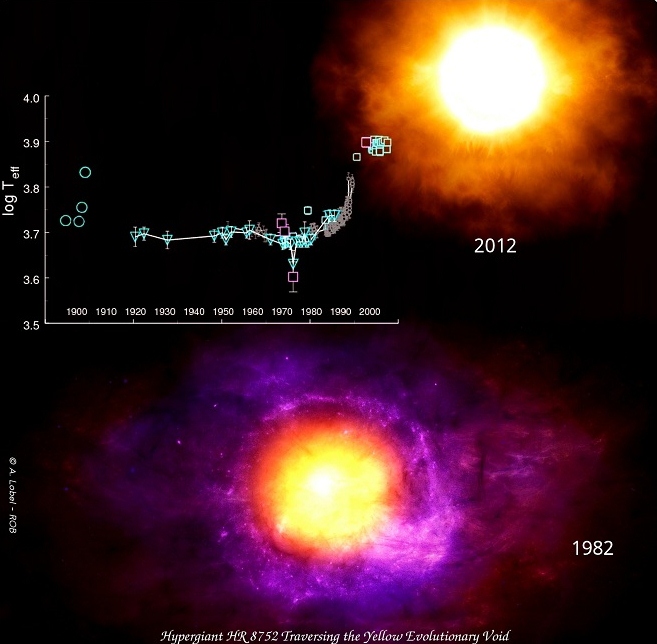 Artist’s rendition of the hypergiant HR 8752 traversing the Yellow Evolutionary Void.  The graph plots the star’s surface temperature (log Teff) observed over a century. It increased from ~5000 to ~8000 C between 1985 and 2005, while the  hypergiant’s radius decreased from 750 to 400 times the radius of the Sun. Image Credit: A. Lobel ROB

The hypergiants are the most luminous stars currently known in the Universe. The particular star they investigated for thirty years is called HR 8752 and can be observed with binoculars in the Northern constellation of Cassiopeia. HR 8752 is about 250 thousand times as luminous as our Sun. The Yellow Evolutionary Void is the surface temperature range from about five to twelve thousand degrees. It appears that this range is void of hypergiants, while one would expect in that temperature range at least a few hypergiants slowly heating up during the late part of their evolution.

The team of astronomers found that the atmospheres of hypergiants are unstable inside the Evolutionary Void because the outward directed forces in their atmospheres equalize or become even stronger than the inward gravitational pull. The instability of their atmospheres causes the gigantic stars to lose tremendous amounts of mass and to traverse the Void in a cosmologically very short timespan. The team has discovered that the Void actually consists of two areas where the atmosphere of hypergiants become unstable, associated with the ionization of hydrogen and helium gas respectively, with a narrow stability strip around eight thousand degrees where the atmospheres are slightly more stable.

While an analysis of earlier photometric observations showed that, at least from ~1900 to ~1980, HR 8752 stayed at a nearly constant surface temperature of five thousand degrees, the team had some indications that around 1985 this remarkable star was fairly close to or even beyond the low-temperature boundary of the Void. Wondering what would happen, the scientists decided to embark on a long and systematic program of spectroscopic observations that lasted for three decades. These have now shown that in the twenty years period from 1985 to 2005 the star’s surface temperature quickly rose from five to eight thousand degrees, while going through a series of events with very strong loss of mass. During the twenty years the radius of HR 8752 has shrunk from 750 to 400 times the radius of the Sun.

Hans Nieuwenhuijzen, former SRON researcher: “Our team made a tremendous effort to combine these observations of HR 8752 and we are delighted to see this marvellous result after so many years. We knew this was the hypergiant to watch and it payed off”.

The observations show the hypergiant star to traverse (part of) the Yellow Evolutionary Void. “They are in fact strong confirmation of the theoretical research on the area of the Void” said team member and former SRON director prof. Kees de Jager, an eminent researcher of the hypergiants. The team published the results in Astronomy and Astrophysics, entitled The hypergiant HR 8752 evolving through the Yellow Evolutionary Void.

The team is stepping up new research on hypergiants with the new findings on HR 8752. Other hypergiants may reveal similar spectacular properties with large changes in surface temperature on human time-scales. A number of candidate stars was selected for spectroscopic monitoring and the search for these unusually large temperature changes is on.