Artist’s concept depicts NASA’s Juno spacecraft during a burn of its main engine. Launching from Earth in 2011, the Juno spacecraft will arrive at Jupiter in 2016 to study the giant planet from an elliptical, polar orbit. Juno will repeatedly dive between the planet and its intense belts of charged particle radiation, coming only 5,000 kilometers (about 3,000 miles) from the cloud tops at closest approach. Juno’s primary goal is to improve our understanding of Jupiter’s formation and evolution. The spacecraft will spend a year investigating the planet’s origins, interior structure, deep atmosphere and magnetosphere. Juno’s study of Jupiter will help us to understand the history of our own Solar System and provide new insight into how planetary systems form and develop in our galaxy and beyond. Image Credit: NASA/JPL-Caltech/Eyes

The deep-space maneuver began at 6:57 p.m. EDT (3:57 p.m. PDT) on Augut 30, when the Leros-1b main engine was fired for 29 minutes 39 seconds. Based on telemetry, the Juno project team believes the burn was accurate, changing the spacecraft’s velocity by about 770 mph (344 meters a second) while consuming about 829 pounds (376 kilograms) of fuel.

“This first and successful main engine burn is the payoff for a lot of hard work and planning by the operations team,” said Juno Project Manager Rick Nybakken of NASA’s Jet Propulsion Laboratory in Pasadena, Calif. “We started detailed preparations for this maneuver earlier this year, and over the last five months we’ve been characterizing and configuring the spacecraft, primarily in the propulsion and thermal systems. Over the last two weeks, we have carried out planned events almost every day, including heating tanks, configuring subsystems, uplinking new sequences, turning off the instruments and increasing the spacecraft’s spin rate. There is a lot that goes into a main engine burn.”

The burn occurred when Juno was more than 300 million miles (483 million kilometers) away from Earth. 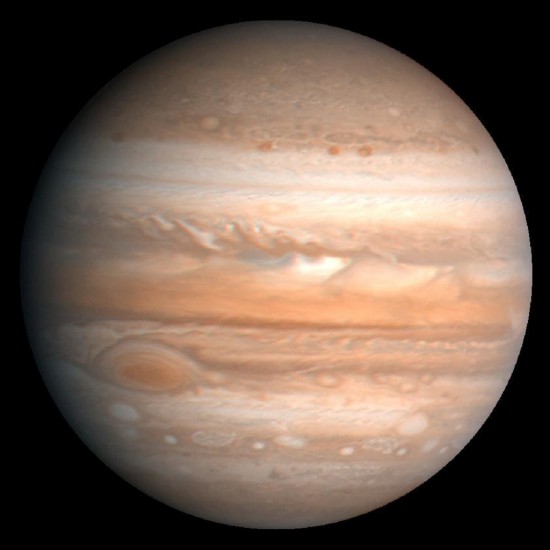 This processed color image of Jupiter was produced from a Voyager image captured in 1979. The colors have been enhanced to bring out detail. Image Credit: NASA/JPL/U.S. Geological Survey

A second deep space maneuver, of comparable duration and velocity change, is planned for Sept. 4. Together, they will place Juno on course for its Earth flyby, which will occur as the spacecraft is completing one elliptical orbit around the Sun. The Earth flyby will boost Juno’s velocity by 16,330 mph (about 7.3 kilometers per second), placing the spacecraft on its final flight path for Jupiter. The closest approach to Earth, on Oct. 9, 2013, will occur when Juno is at an altitude of about 310 miles (500 kilometers).

“We still have the Earth flyby and another 1.4 billion miles and four years to go to get to Jupiter,” said Scott Bolton, Juno’s principal investigator from the Southwest Research Institute in San Antonio. “The team will be busy during that whole time, collecting science on the way out to Jupiter and getting ready for our prime mission at Jupiter, which is focused on learning the history of how our Solar System was formed. We need to go to Jupiter to learn our history because Jupiter is the largest of the planets, and it formed by grabbing most of the material left over from the Sun’s formation. Earth and the other planets are really made from the leftovers of the leftovers, so if we want to learn about the history of the elements that made Earth and life, we need to first understand what happened when Jupiter formed.”

Juno was launched on Aug. 5, 2011. Once in orbit, the spacecraft will circle Jupiter 33 times, from pole-to-pole, and use its collection of eight science instruments to probe beneath the gas giant’s obscuring cloud cover. Juno’s science team will learn about Jupiter’s origins, structure, atmosphere and magnetosphere, and look for a potential solid planetary core.

Juno’s name comes from Greek and Roman mythology. The god Jupiter drew a veil of clouds around himself to hide his mischief, and his wife, the goddess Juno, was able to peer through the clouds and reveal Jupiter’s true nature.