A research team led by Bunyo Hatsukade, a postdoc researcher, and Kouji Ohta, a professor, both from the Graduate School of Science, Kyoto University, revealed that approximately 80% of the unidentifiable millimeter wave signals from the Universe is actually emitted from galaxies, based on the observations with ALMA (Atacama Large Millimeter/submillimeter Array). ALMA’s high resolving power and sensitivity enables us to pinpoint the locations of those galaxies rich in fine solid particles (dust). 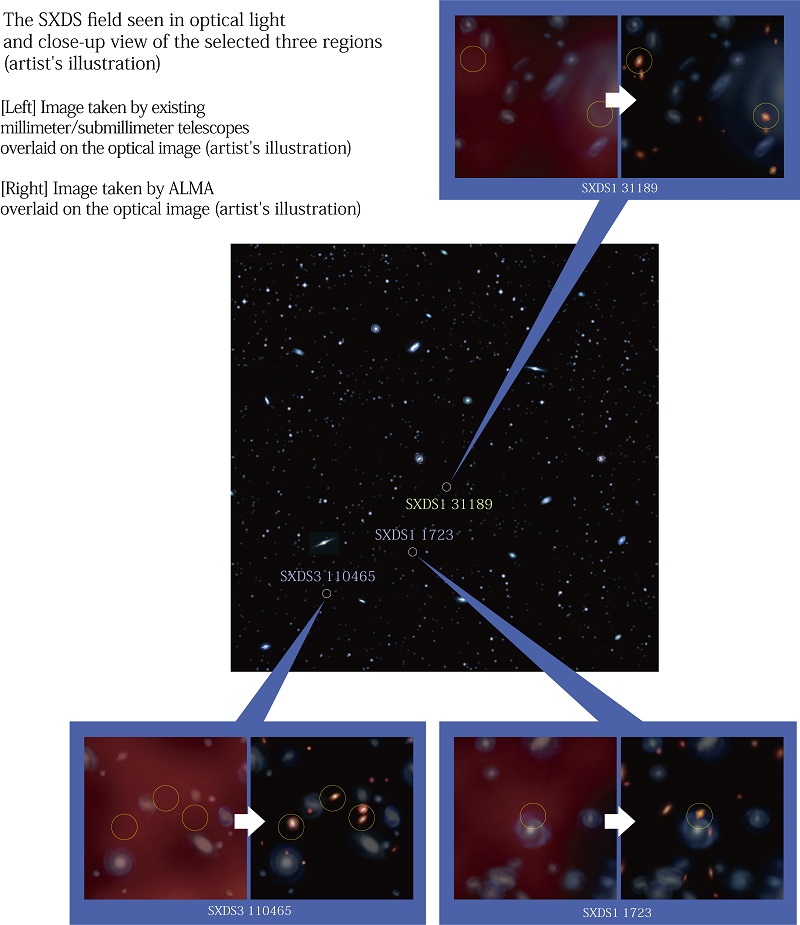 Artist’s illustration of the observed field. In each close-up view, left is the illustration of the optical (blue) and conventional millimeter/submillimeter (red) image and right is the optical and ALMA image. Existing millimeter/submillimeter telescopes could not identify the sources of the emission due to their low resolution, however, ALMA pinpoints the galaxies which emit the emission. These objects were not detected in the optical observations, which indicate that they are heavily embedded in dust. Image Credit: ALMA (ESO/NAOJ/NRAO) / Kyoto University

With the ALMA telescope, the research team observed the “Subaru/XMM-Newton Deep Survey Field” in the direction of the constellation Cetus, and succeeded in identifying 15 extremely faint galaxies which had been previously unknown. In addition, they also successfully measured the number density of galaxies with 10 times less luminosity than ones previously observed with the conventional millimeter instruments. Their densities well match the prediction by theories of galaxy formation. Therefore, the researchers consider that they managed to capture more “normal” galaxies, which had been impossible to detect up to now, than extremely bright “submillimeter-luminous galaxies”. Using ALMA and the Subaru Telescope, the research team is now seeking to uncover the overall picture of galaxy formation and evolution while conducting observations of much darker galaxies.

Conventional research on distant galaxies have been carried out mainly with visible light and near infrared light. However, it is possible that many galaxies in the Universe have been overlooked as much of that radiation is largely absorbed by cosmic dust (*1). That is why millimeter and submillimeter wave observations are important. Stellar light absorbed by dust is reradiated from the dust as millimeter/submillimeter waves. Therefore galaxies, even those which have not been possible to observe with optical telescopes, can be detected using these wavebands. Furthermore, millimeter/submillimeter waves are suitable for observation of distant galaxies. This is because the more distant the galaxy is, the more luminous part of light we can see due to the shift of wavelength of light by the expansion of the Universe. This effect is called “negative K correction” and it compensates the source dimming in the distant Universe.

In past observations, gigantic galaxies deeply covered in dust, where several hundreds to thousands of stars are actively forming per year, have been detected with millimeter/submillimeter waves. To capture the overall picture of galaxies in the Universe, it is important to observe “general galaxies” which have moderate star-formation activities. However, it has not been possible to detect faint galaxies due to the low sensitivity of existing observation instruments.

The research team observed a field named “Subaru/XMM-Newtown Deep Survey Field,” located in the direction of the constellation Cetus, with the ALMA telescope. As a result, they succeeded in finding 15 extremely dark galaxies that were unidentified until now. “It is thanks to the high performance of ALMA, which is proudly said to be the best in the world, that observations like this have been made possible,” said Hatsukade.

This figure shows number density (red squares) for each brightness of the galaxies derived from observation this time. Compared to past observation results (blue squares), galaxies approximately ten times as dark were detected. The curve shows the prediction by the theories of galaxy formation. Image Credit: ALMA (ESO/NAOJ/NRAO) / Kyoto University

With the ALMA observations the team successfully measured the number density of galaxies approximately 10 times darker than the millimeter wave research results up to now. The new results agree well with the prediction by the theories of galaxy formation. That means, the galaxies detected in this research are the faint but dust-rich galaxies and they are most likely to be similar in type to normal galaxies not detected before.. In regards to this, Professor Ohta commented, “This is a big step towards getting the big picture of galaxy evolution as the objects connecting especially bright galaxies in millimeter/submillimeter waves and normal galaxies were detected with ALMA.”

Furthermore, the team concluded that approximately 80% of the sources of the cosmic background radiation (*2) within the millimeter/submillimeter wavebands are more “normal galaxies” like those detected by ALMA this time. Past observations showed the total power of signals emitted from the Universe with the millimeter/submillimeter wavebands. However, spatial resolution was not sufficient to identify the sources of all the signals; only 10 – 20% of them were identified.

To gain an overall picture of galaxies in the Universe requires a much higher sensitivity for observation. For this research, only a part of the ALMA telescope, 23~25 antennas, were used. As the number of antennas in the ALMA telescope increases, its observation ability will also improve. Hatsukade expressed his hopes, saying “I want to clarify the overall picture of galaxy evolution. So, using ALMA, I would like to make observations of much fainter galaxies, and also study star formation activities and the amount of dust in those galaxies in detail.” Professor Ohta also mentioned, “We are also planning to make thorough observations with visible light and infrared radiation, using the Subaru Telescope. This is in order to explore the nature of galaxies become darker due to light-absorbing dust. But for observations of extremely dark galaxies, we might need the Thirty Meter Telescope with much larger light-gathering power.”

The research is described in the paper “FAINT END OF 1.3 mm NUMBER COUNTS REVEALED BY ALMA” in the Astrophysical Journal Letters published on June 1st, 2013.

*1. Cosmic dust is small solid particles consisted of silicon, carbon, iron and other elements with the size smaller than 1 micrometer.

*2. Some types of radiation seem to be dimly emitted not from a certain object, but from the overall Universe. This is called the “cosmic background radiation”. The most typical is “3 K Cosmic Microwave Background Radiation,” which is supposed to be a remnant of the Big Bang. However, even when many dark celestial bodies emit radiation, the emission may be observed just as “cosmic background” radiation if the sensitivity and resolution of the telescope in use is insufficient. To clear up this misidentification, astronomers need telescopes with better sensitivity and resolution.