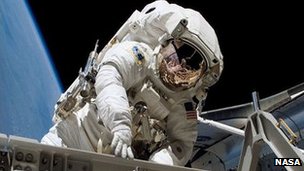 Missions to the space station last six months, but missions to Mars could last years

The eyes and brains of astronauts who have spent long periods of time in orbit can develop abnormalities, new research has suggested.

Magnetic resonance imaging (MRI) on 27 spacefarers found effects similar to those that can occur in intracranial hypertension, which results in a build up of pressure within the skull.

The concern would be that astronauts could suffer eyesight problems.

The study is reported in the Journal of Radiology.

It was led by Larry Kramer, a professor of diagnostic and interventional imaging at the University of Texas Medical School at Houston.

His team examined astronauts who had spent more than 30 days of cumulative time in the weightless environment of space.

The group found evidence for expansion of the cerebral spinal fluid space surrounding the optic nerve of nine of the astronauts, a flattening of the rear of the eyeball in six, a bulging of the optic nerve in four, and changes in the pituitary gland and its connection to the brain in three individuals. The pituitary gland secretes and stores hormones that regulate a variety of important body functions.

The health of astronauts is very carefully monitored. Living in weightless conditions for extended periods can result in a loss of bone density and in muscle wastage. There are also dangers associated with radiation coming from the Sun.

It is partly for these reasons that stays on the International Space Station (ISS) are restricted to six months. If missions to Mars were ever conducted, the period of travel to and from the planet would likely take over a year.

US space agency (Nasa) medical staff said they were looking into the latest concerns, but that the scale of abnormalities observed did not have them unduly worried at this stage.

William Tarver, the chief of flight medicine clinic at Nasa’s Johnson Space Center, said the results were suspicious but not conclusive of intracranial hypertension.

“Nasa has placed this problem high on its list of human risks, has initiated a comprehensive programme to study its mechanisms and implications, and will continue to closely monitor the situation,” he said.