Discovered in 2005, the clays in the southern hemisphere of Mars is often considered as a proof of the existence of liquid water on the Red Planet at a very early period of between 4.5 and 4 billion years. But the work of a French-American team led by researchers at the Institute of Chemistry of materials and environments Poitiers (CNRS / Université de Poitiers) questioned this interpretation. In an article that was published on September 9 on the website of the journal Nature Geoscience , they show that these clays are likely to be of magmatic origin. The many similarities between the Martian clays and those of volcanic origin collected on the Mururoa atoll support their hypothesis. This image reveals exposed layers in Noctis Labyrinthus on the southern hemisphere of Mars, which may contain signatures of iron bearing sulfates and phyllosilcate (clay) minerals. Image Credit: NASA/JPL-Caltech/University of Arizona

On the southern hemisphere of Mars are the oldest rocks on the planet: the crust in this region is formed there between 4.5 and 4 billion years. It is here that were discovered in 2005, clay rich in iron and magnesium. The presence of such minerals, considered from the decomposition of rocks by the action of liquid water, gave the impression that it was present on the Martian surface from this early period.
However, a team of researchers has shown that the origin of these clays is probably magma. To support their hypothesis, the researchers examined the basalts of the Mururoa Atoll (French Polynesia). These consist of basalts well formed crystals limiting small spaces filled with a material called finely crystallized groundmass. It contains ferro-magnesian clays similar to those found on Mars.
The researchers showed that these clays were formed from liquid magma rich residual water trapped in the spaces between the crystals. At the end of the cooling of magma, the components of the residual fluids precipitated forming various minerals, including clays. No aqueous alteration in this case. 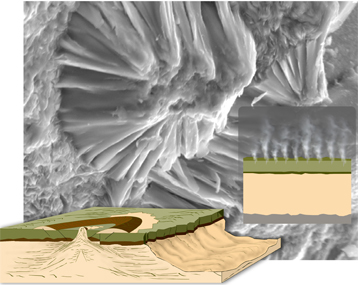 The clay particles covering the surfaces of the crystals of basaltic Air Guyot Mururoa (French Polynesia). Similar clays may have formed in the basaltic rocks of the crust on Mars Noachienne (yellow) probably did not have total degassing. They have formed in rocks of the Hesperian (green) were completely degassed. Image Credit: A. Meunier and S. Riffaut
Scientists have noticed that the Martian magma met all the conditions, in particular a high water content and chlorine, that this process could produce clays in abundance on the basaltic surface of Mars. Moreover, we know that shortly after its formation Mars, just as the early Earth, was covered by a magma ocean. During this period, the clays may have formed.
But that’s not all: they also showed that the infrared spectrum of Martian clays measured by the orbiter Mars Express and Mars Reconnaissance Orbiter, is identical to that of clays on Mururoa. Such work could have implications for the search for markers of life on Mars.
Indeed, if the presence of liquid water around -3 billion years proved by traces of rivers, lakes and alluvial fans, nothing suggests that there may have been periods as remote as -4, 5 or -4.0 billion years, as has been thought until now. The time period for the emergence of life on Mars could have been much shorter than expected.
Curiosity mission that will explore part of the sedimentary formations of Mars’s Gale Crater, which indicate the presence of liquid water at a much later period, is expected to raise a number of uncertainties.