Astronomers using NASA’s Chandra X-ray Observatory have taken a major step in explaining why material around the giant black hole at the center of the Milky Way Galaxy is extraordinarily faint in X-rays. This discovery holds important implications for understanding black holes. 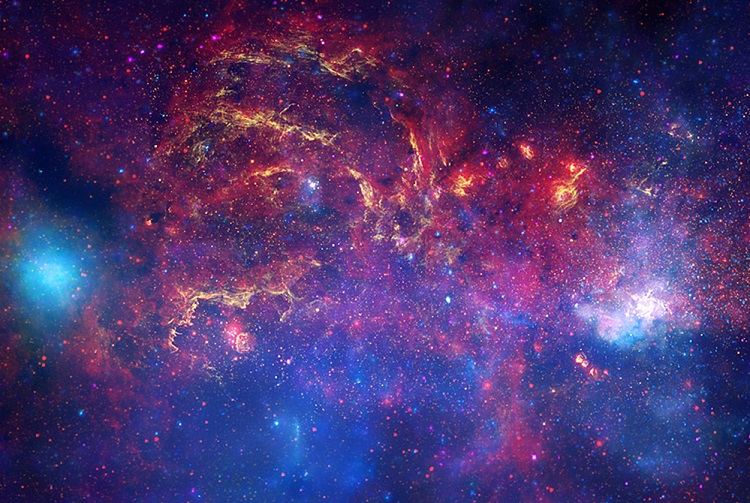 This composite image combines observations using infrared light and X-ray light that see through the obscuring dust and reveal the intense activity near the Galactic Core. Note that the center of the galaxy is located within the bright white region to the right of and just below the middle of the image. Image Credit: NASA, ESA, SSC, CXC, and STScI

New Chandra images of Sagittarius A* (Sgr A*), which is located about 26,000 light-years from Earth, indicate that less than 1 percent of the gas initially within Sgr A*’s gravitational grasp ever reaches the point of no return, also called the event horizon. Instead, much of the gas is ejected before it gets near the event horizon and has a chance to brighten, leading to feeble X-ray emissions.

These new findings are the result of one of the longest observation campaigns ever performed with Chandra. The spacecraft collected five weeks’ worth of data on Sgr A* in 2012. The researchers used this observation period to capture unusually detailed and sensitive X-ray images and energy signatures of super-heated gas swirling around Sgr A*, whose mass is about 4 million times that of the Sun.

“We think most large galaxies have a supermassive black hole at their center, but they are too far away for us to study how matter flows near it,” said Q. Daniel Wang of the University of Massachusetts in Amherst, who led a study published 30 August in the journal Science. “Sgr A* is one of very few black holes close enough for us to actually witness this process.” 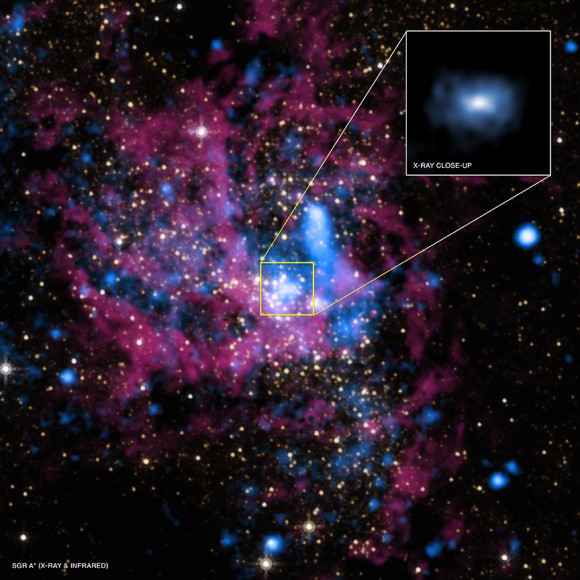 The researchers found that the Chandra data from Sgr A* did not support theoretical models in which the X-rays are emitted from a concentration of smaller stars around the black hole. Instead, the X-ray data show the gas near the black hole likely originates from winds produced by a disk-shaped distribution of young massive stars.

“This new Chandra image is one of the coolest I’ve ever seen,” said co-author Sera Markoff of the University of Amsterdam in the Netherlands. “We’re watching Sgr A* capture hot gas ejected by nearby stars, and funnel it in towards its event horizon.”

To plunge over the event horizon, material captured by a black hole must lose heat and momentum. The ejection of matter allows this to occur.

“Most of the gas must be thrown out so that a small amount can reach the black hole”, said Feng Yuan of Shanghai Astronomical Observatory in China, the study’s co-author. “Contrary to what some people think, black holes do not actually devour everything that’s pulled towards them. Sgr A* is apparently finding much of its food hard to swallow.” 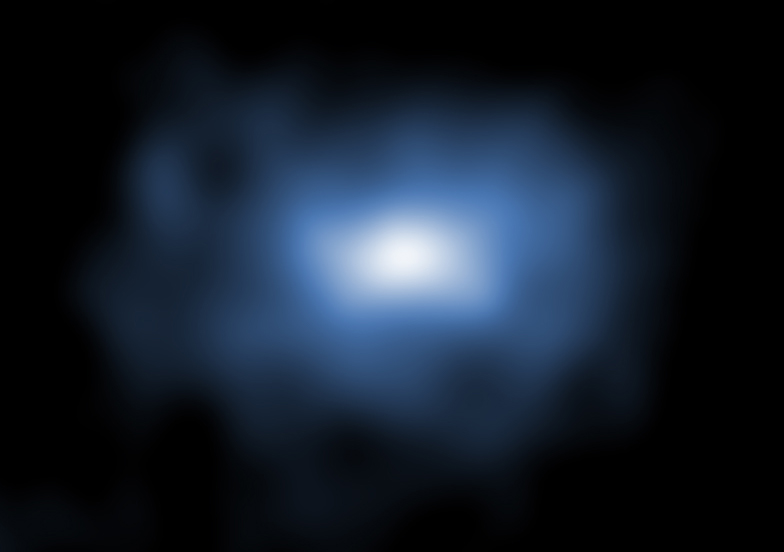 SgrA* closeup: The blue fuzzy object at the center are X-rays from emitted Sgr A*, the super massive black hole at the center of our Milky Way galaxy. Image Credit: NASA/UMass/D.Wang et al.

The gas available to Sgr A* is very diffuse and super-hot, so it is hard for the black hole to capture and swallow it. The gluttonous black holes that power quasars and produce huge amounts of radiation have gas reservoirs much cooler and denser than that of Sgr A*.

The event horizon of Sgr A* casts a shadow against the glowing matter surrounding the black hole. This research could aid efforts using radio telescopes to observe and understand the shadow. It also will be useful for understanding the effect orbiting stars and gas clouds may have on matter flowing toward and away from the black hole.