A group of astronomers led by Gregg Wade of the Royal Military College of Canada have used the Hobby-Eberly Telescope (HET) at The University of Texas at Austin’s McDonald Observatory and the Canada-France Hawaii Telescope (CFHT) on Hawaii’s Mauna Kea to measure the most magnetic massive star yet. Their work is published in yesterday’s issue of the research journal Monthly Notices of the Royal Astronomical Society.

NGC 1624, an open star cluster in a faint, diffuse nebula about 20,000 light-years away in the constellation of Perseus. Image Credit: Dan Eldredge

This star is an extreme case study to help astronomers better understand all massive stars, which play an important role in the evolution of galaxies.

“Understanding the evolution of massive stars, those that explode as core-collapse supernovae, is really important,” said team member Anne Pellerin of Canada’s Mount Allison University. (Formerly a researcher at Texas A&M University, Pellerin used the Hobby-Eberly Telescope via an agreement between The University of Texas at Austin and Texas A&M.)

When the stars explode, the heavy chemical elements born in the cores are scattered into space, she explained. “In the big picture, the Sun is born from the debris of a supernova that exploded — that’s how we get iron.”

Additionally, despite their short lives (NGC 1624-2 will live only about five million years, or one-tenth of one percent of the Sun’s current age at midlife), massive stars shape the galaxies in which they live. “Their strong winds, intense radiation fields, and dramatic supernova explosions make them the primary sculptors of the structure, chemistry, and evolution of galaxies,” Wade said. But “massive stars are rare,” Pellerin said. “Anything we can do to get to know them is good.” She explained that the extreme magnetic fields of massive stars aren’t well understood.

“The most important consequence of the strong magnetic field is that it binds and controls the stellar wind of NGC 1624-2 to a very large distance from the star — 11.4 times the star’s radius,” Wade said. “The huge volume of this magnetosphere is remarkable. It’s more than four times wider than that of any other comparable massive star, and in terms of volume it is around 80 times larger.” The star’s magnetic field also influences the internal structure of NGC 1624-2, he said.

Thus the magnetic field can strongly influence a massive star’s life, from birth to supernova death. But because these magnetic fields are poorly understood, models of stellar evolution are incomplete.

“We need observations of stars like NGC 1624-2 to teach us what’s really going on,” Wade said.

The team wanted to better understand the nature of this monster star, but it is so distant, and surrounded by dust, that they needed a large telescope with immense light-gathering power to study its light in detail.

“This star is hard to observe because it’s highly extinguished by dust,” Pellerin said. “That makes it fainter, so it takes a bigger telescope mirror.” They used the 9.2-meter HET coupled with its High Resolution Spectrograph instrument. 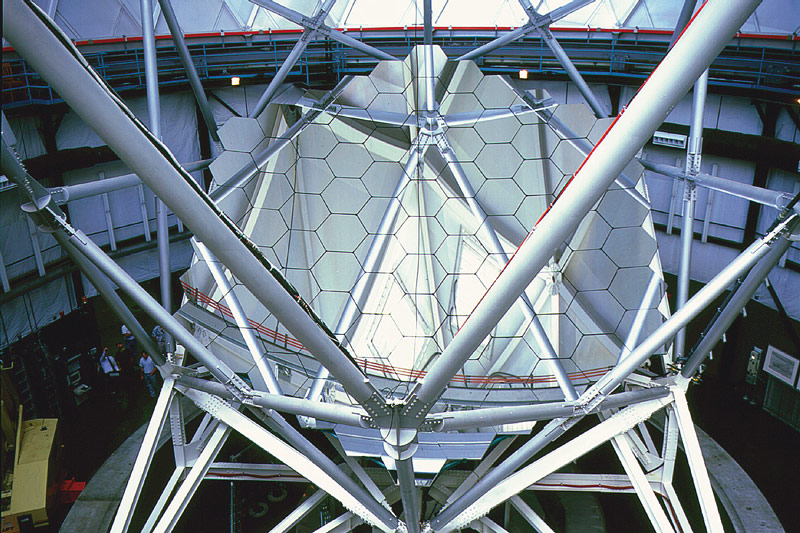 “The winds of massive stars are very dense, especially compared to the Sun’s,” which is called the solar wind, Pellerin said. “These stars are losing a lot of mass through their winds — up to 30 percent over their entire lives. The wind is a plasma, made up of charged particles that follow the lines of the magnetic field,” she explained. “It creates some weird features in the spectra.”

“We think that the star is slowed down because it has to drag its wind around — because the wind is bound to the magnetic field,” Wade said. “This is something that has to be tested, but it looks very likely.”

To measure the strength of star’s magnetic field, the team used the Canada-France-Hawaii Telescope (CFHT) coupled with an instrument called ESPaDOnS. Specifically, they measured small biases in the direction of rotation of the electromagnetic waves absorbed or emitted by atoms located in the field.

ESPaDOnS is the most powerful instrument in the world for this kind of work, Wade said.