Recent geologic mapping of the Medusae Fossae Formation (MFF) on Mars—an intensely eroded deposit near the northern edge of the cratered highlands—has revealed a wider distribution of its western component than was previously recognized. 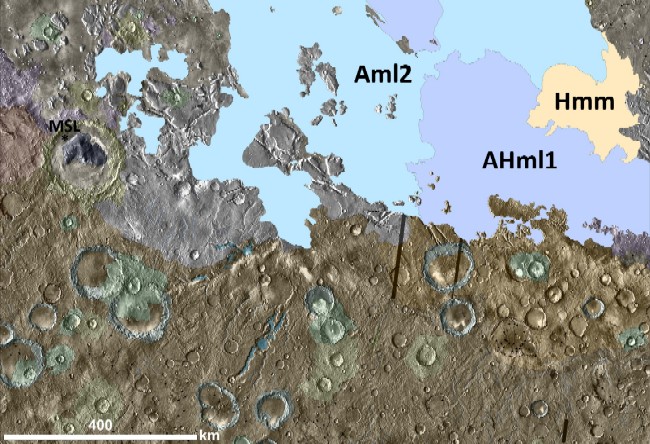 Crater counts show that the western portions of the formation are much older than previously thought, originating near the end of the Hesperian geologic epoch on Mars, around 3.5 billion years ago. This means that these deposits were emplaced during the epoch that shows evidence for the wide distribution of water at the surface of Mars. The new mapping also revealed the presence of MFF materials close to Gale crater, the landing site chosen for the Mars Science Laboratory rover Curiosity, en route to an August 2012 landing. The findings are reported in a paper by Smithsonian scientists James R. Zimbelman and Stephen P. Scheidt, “Hesperian age for western Medusae Fossae Formation, Mars” scheduled for publication in the June 29 issue of the journal Science.

“Layering at the top of the large mound at the center of Gale is similar to layering visible in western Medusae Fossae Formation exposures, so Curiosity may be able to examine these materials up close, providing the first direct evidence of how they were formed,” said Zimbelman, geologist at the Air and Space Museum’s Center for Earth and Planetary Studies and lead author on the paper. “This is exciting because so far none of our orbiting spacecraft have been able to measure the composition of MFF materials, something crucial to any explanation of its origin.” 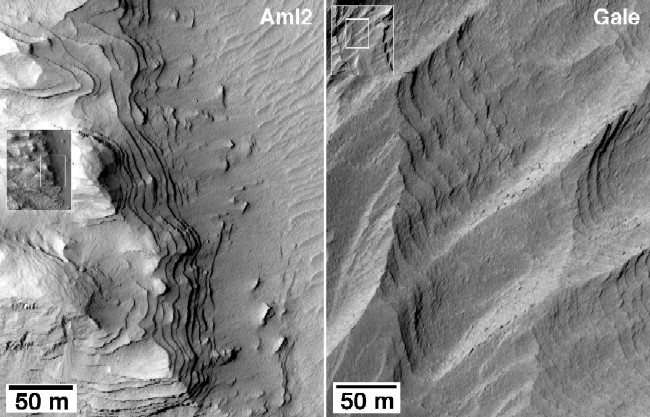 Scheidt and Zimbelman have been preparing geologic maps of two portions of the MFF, supported by a research grant from the Planetary Geology and Geophysics program of NASA. The proximity of MFF materials to Gale is important because the Mars Science Laboratory rover will land inside Gale crater Aug. 6. The primary goal for Curiosity is to look for chemical evidence of ancient life preserved within exposures near the base of a large (5 kilometers high) mound of layered materials at the center of Gale crater.

A logical extension of the interpretations in this report suggests that the materials comprising the upper portions of Gale mound might be outliers of MFF materials, much like the ones now identified just outside of the crater. The precise instruments of Curiosity might then show what MFF materials are made of, and thereby open a window onto what happened during the close of the climate-altering Hesperian period.