Near surface water has shaped the landscape of Mars. Areas of the planet’s northern and southern hemispheres have alternately thawed and frozen in recent geologic history and comprise striking similarities to the landscape of Svalbard. This suggests that water has played a more extensive role than previously envisioned, and that environments capable of sustaining life could exist, according to new research from the University of Gothenburg, Sweden.

Mars is a changing planet, and in recent geological time repeated freeze and thaw cycles has played a greater role than expected in terms of shaping the landscape. In an attempt to be able to make more reliable interpretations of the landscapes on Mars, researchers have developed new models for analyzing images from the planet. 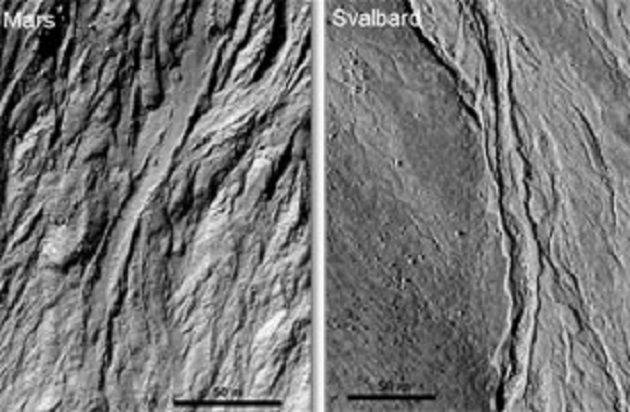 The landscape of Svalbard shows the way

The process of analyzing satellite images from Mars has been combined with similar studies of an arctic environment in Svalbard. Despite the fact that Svalbard is considerably warmer than Mars, the arctic landscape shows a number of striking similarities to certain parts of Mars.

One important common feature is the presence of permafrost and frozen subsurface water.

“In my thesis work, I have compared aerial images from Svalbard with the same resolution as satellite images from Mars, and combined with field-work we increase the ground resolution even further” explains Dr Andreas Johnsson from the University of Gothenburg’s Department of Earth Sciences, who has worked together with planetary researchers from Germany.

Having studied hundreds of gullies on Mars and compared these with Svalbard, the researchers found evidence that the gullies on Mars were likely formed by melting snow and water erosion. Field work has supplemented the interpretation of aerial images.

“The ability to get a first-hand experience with landforms that have been studied using aerial images is a unique feeling. One important insight we have gained is that, despite the high image resolution for both Svalbard and Mars, the camera can’t capture everything. What appears to be fine-grained sediment on an aerial image of Svalbard can actually turn out to be a very rocky area which has implications for certain types of landforms. It’s important to bear this in mind when studying images of Mars.”

Since Mars has a cyclical climate, the same conditions could recur in the future.

Water is essential to any life on Mars

The existence of liquid water is a vital component if life on Mars is to be possible.

“Research on Earth has shown that organisms can survive in extreme cold environments with limited access to liquid water,” continues Dr Johnsson. “Studying various areas on Mars therefore enables us to investigate whether there could be environments with conditions capable of supporting life.”