On 6 June, the high-resolution stereo camera on ESA’s Mars Express revisited the Argyre basin, this time aiming at Nereidum Montes, some 380 km northeast of Hooke crater. The stunning rugged terrain of Nereidum Montes marks the far northern extent of Argyre, one of the largest impact basins on Mars. 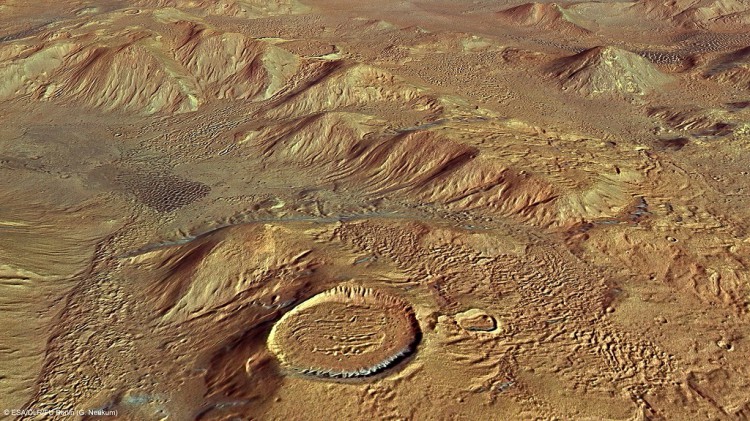 This computer-generated perspective view was created using data obtained from the High-Resolution Stereo Camera (HRSC) on ESA’s Mars Express. Centred at around 40°S and 310°E, the image has a ground resolution of about 23 m per pixel. This perspective view highlights many of the rippled sand dunes which form on the leeward (wind-sheltered) sides of mounds and canyons, as well as the lobate and fan-shaped surface around the impact crater which dominates the lower portion of the image. These features may indicate the previous extent of glaciation in the region, before a drier period in the planet’s history created the smooth plains. Taken during revolution 10736 on 6 June 2012. Credits: ESA/DLR/FU Berlin (G. Neukum)

Based on his extensive observations of Mars, Antoniadi famously concluded that the ‘canals’ on Mars reported by Percival Lowell were, in fact, just an optical illusion. 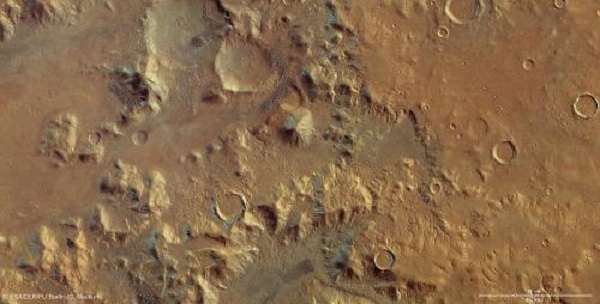 High-Resolution Stereo Camera (HRSC) nadir and colour channel data taken during revolution 10736 on 6 June 2012 by ESA’s Mars Express have been combined to form a natural-colour view of Nereidum Montes. Centred at around 40°S and 310°E, the image has a ground resolution of about 23 m per pixel. It shows a portion of the extensive region, with concentric crater fill in many of the craters towards the east (lower part of the image). Undulations in crater floors are commonly seen in mid-latitude regions on Mars and are believed to be a result of glacial movement. Credits: ESA/DLR/FU Berlin (G. Neukum)

The images captured by Mars Express show a portion of the region, displaying multiple fluvial, glacial and wind-driven features.

Extensive dendritic drainage patterns, seen towards the north (lower right side) of the first and topographic images, were formed when liquid water drained into deeper regions within the area.

On Earth, tree-like channels of this kind are usually formed by surface runoff after significant rainfall, or when snow or ice melts. Similar processes are thought to have occurred on Mars in the distant past, when scientists now know there to have been water on the surface of the Red Planet. Several of the craters within the region, particularly in eastern parts (lower section) of the second image, show concentric crater fill, a distinctive martian process marked by rings of surface fluctuations within a crater rim.

The ratios between the diameter and depth of the filled craters suggest that there may still be water ice, possibly in the form of ancient glaciers, present below the dry surface debris cover.

Scientists have estimated that the water-ice depth in these craters varies from several tens up to hundreds of metres. 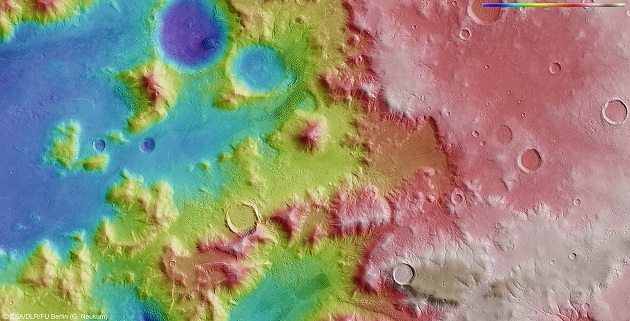 This colour-coded plan view is based on an ESA Mars Express HRSC digital terrain model of the region, from which the topography of the landscape can be derived. The colour coding enhances the visibility of the rippling sand dunes which formed in the wind-sheltered sides of the mounds and canyons. Centred at around 40°S and 310°E, the image has a ground resolution of about 23 m per pixel. Taken during revolution 10736 on 6 June 2012. Credits: ESA/DLR/FU Berlin (G. Neukum)

The largest crater on the south western side (top-left half) of the second and topographic images appears to have spilled out a glacier-like formation towards lower-lying parts of the region (shown as blue in the topographic image).

A smooth area to the east of (below) the glacial feature appears to be the youngest within the image, evidenced by an almost complete lack of cratering. This computer-generated perspective view of Nereidum Montes was created using data obtained from the High-Resolution Stereo Camera (HRSC) on ESA’s Mars Express. Centred at around 40°S and 310°E, the image has a ground resolution of about 23 m per pixel. In the foreground near to the crater, a mud or ice-landslide is seen, possibly due to glacial processes. The striations along the slopes of both the right side of the inner crater wall and on the slopes of the range to the left of the crater indicate the presence of ice. Credits: ESA/DLR/FU Berlin (G. Neukum)

Another indication of subsurface water is seen in the fluidised ejecta blanket surrounding the crater at the northern edge (right-hand side) of the first and topographic images.

These ejecta structures can develop when a comet or asteroid hits a surface saturated with water or water ice. Nereidum Montes imaged during revolution 10736 on 6 June 2012 by ESA’s Mars Express using the High-Resolution Stereo Camera (HRSC). Data from HRSC’s nadir channel and one stereo channel have been combined to produce this anaglyph 3D image that can be viewed using stereoscopic glasses with red–green or red–blue filters. Centred at around 40°S and 310°E, the image has a ground resolution of about 23 m per pixel.  Credits: ESA/DLR/FU Berlin (G. Neukum)

Finally, throughout the images and often near the wind-sheltered sides of mounds and canyons, extensive rippling sand dune fields are seen to have formed.

In-depth studies of regions such as Nereidum Montes play an essential role in unlocking the geological past of our terrestrial neighbour, as well as helping to find exciting regions for future robotic and human explorers to visit.