Microorganisms that crashed to Earth embedded in the fragments of distant planets might have been the sprouts of life on this one, according to new research presented at the European Planetary Sciences Congress (EPSC) on 25 September. 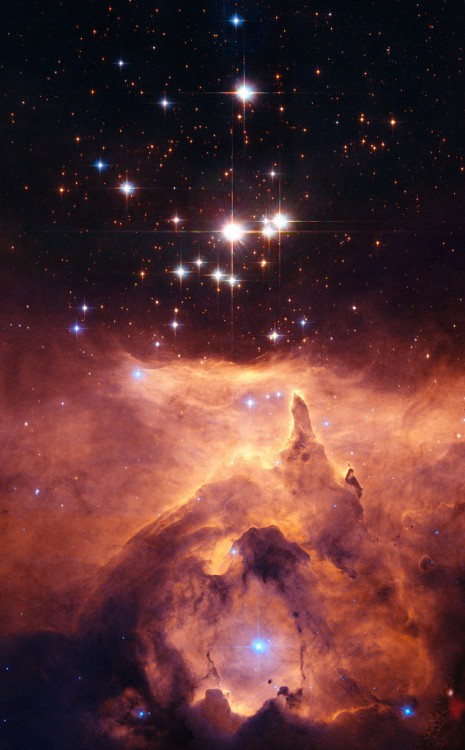 The Sun is thought to have formed in a cluster of other stars around 4.5 billion years ago. Newly born star clusters like Pismis 24 (pictured) may be similar to the environment in which the Sun spent in its early years. Much closer to its neighbours than it is now, the nascent Solar System probably exchanged material with other planetary systems, and it is possible that early life could have spread between these neighbouring planetary systems. Image Credit: NASA, ESA and Jesús Maíz Apellániz (Instituto de Astrofísica de Andalucía, Spain)

The researchers report that under certain conditions there is a high probability that life came to Earth — or spread from Earth to other planets — during the Solar System’s infancy when Earth and its planetary neighbours orbiting other stars would have been close enough to each other to exchange lots of solid material.

The findings provide the strongest support yet for lithopanspermia, the hypothesis that basic life forms are distributed throughout the Universe via meteorite-like planetary fragments cast forth by disruptions such as volcanic eruptions and collisions with objects such as asteroids. Eventually, another planetary system’s gravity traps these roaming rocks, which can result in a mingling that transfers any living cargo.

Previous research on this possible phenomenon suggested that the speed at which objects hurtle through space made the chance of them being captured by another planet very small. However, this new research, based on computer simulations of the star cluster our Sun was born in, suggests that a process called weak transfer, in which solid objects can gradually meander out of the orbit of one object and into another, greatly increase the odds that this process could have happened.

Researchers have used a low-velocity process called weak transfer to provide the strongest support yet for “lithopanspermia,” the idea that the microorganisms that sprout life came to Earth — or spread from Earth to other developing planets — via collisions with meteorite-like planetary fragments. Under weak transfer, a slow-moving planetary fragment meanders into the outer edge of the gravitational pull, or weak stability boundary, of a planetary system. The system has only a loose grip on the fragment, meaning the fragment can escape and be propelled into space, drifting until it is pulled in by another planetary system. Image Credit: Amaya Moro-Martín

“Our work says the opposite of most previous work,” says Belbruno. “It says that lithopanspermia might have been very likely, and it may be the first paper to demonstrate that. If this mechanism is true, it has implications for life in the Universe as a whole. This could have happened anywhere.”

The team noted that low velocities offer very high probabilities for the exchange of solid material via weak transfer, and also found that the timing of such an exchange could be compatible with the actual development of the Solar System, as well as with the earliest known emergence of life on Earth.

The researchers suggest that ideal conditions for lithopanspermia in the Sun’s birth cluster, in the Solar System and on Earth overlapped for several hundred million years (blue shaded area). Rock evidence suggests that the Earth (bottom line) contained surface water during a period when the relative velocities between the Sun and its closest cluster neighbors (top line) were small enough to allow weak transfer to other planetary systems, and when the Solar System (middleline) experienced high meteorite activity within the Sun’s weak gravitational boundary. If life arose on Earth shortly after surface water was available, life could have journeyed from Earth to another habitable world during this time, or vice versa if life had an early start in another planetary system. Image Credit: Amaya Moro-Martín

The researchers report that the Solar System and its nearest planetary-system neighbour could have swapped rocks at least 100 trillion times well before the Sun struck out from its native star cluster. Furthermore, existing rock evidence shows that basic life forms could indeed date from the Sun’s birth cluster days — and have been hardy enough to survive an interstellar journey and eventual impact.

“The conclusion from our work,” Moro-Martín says, “is that the weak transfer mechanism makes lithopanspermia a viable hypothesis because it would have allowed large quantities of solid material to be exchanged between planetary systems, and involves timescales that could potentially allow the survival of microorganisms embedded in large boulders.”

The study shows that exchange of material between different planetary systems is likely, but it stops short when the solid matter is captured by the second planetary system. For lithopanspermia to actually take place, the material needs to land on an Earth-like planet where life could flourish.

“The study of the probability of landing on a terrestrial planet is work that we now know is worth doing because large quantities of solid material originating from the first planetary system may be trapped by the second planetary system, waiting to land on a terrestrial planet,” says Moro-Martín. “Our study does not prove lithopanspermia actually took place, but it indicates that it is an open possibility.”

As well as presenting to the EPSC, the team’s research is detailed in a paper entitled, “Chaotic Exchange of Solid Material between Planetary Systems: Implications for Lithopanspermia,” published in the 12 September issue of the journal Astrobiology.