With the combined power of NASA’s Spitzer and Hubble space telescopes as well as a cosmic magnification effect, a team of astronomers led by Wei Zheng of The Johns Hopkins University has spotted what could be the most distant galaxy ever seen. Light of the young galaxy captured by the orbiting observatories shone forth when the 13.7-billion-year-old Universe was just 500 million years old. A team of astronomers led by Wei Zheng of Johns Hopkins University have spotted a distant galaxy that dates to a period just after the so-called “Dark Ages” of the Universe. The galaxy, MACS 1149-JD, is shown here in three levels of detail. Image Credit: NASA, ESA, W. Zheng (JHU), M. Postman (STScI), and the CLASH Team

The far-off galaxy existed within an important era when the Universe began to transition from the so-called “Dark Ages.” During this period, the Universe went from a dark, starless expanse to a recognizable cosmos full of galaxies. The discovery of the faint, small galaxy accordingly opens up a window into the deepest, most remote epochs of cosmic history.

“This galaxy is the most distant object we have ever observed with high confidence,” said Zheng, a principal research scientist in the Department of Physics and Astronomy at the Krieger School of Arts and Sciences and lead author of a new paper appearing in Nature today. “Future work involving this galaxy—as well as others like it that we hope to find—will allow us to study the Universe’s earliest objects and how the Dark Ages ended.”

Light from the primordial galaxy traveled approximately 13.2 billion light-years before reaching NASA’s telescopes. In other words, the starlight snagged by Spitzer and Hubble left the galaxy when the Universe was just 3.6 percent of its present age. Technically speaking, the galaxy has a redshift, or “z,” of 9.6. The term “redshift” refers to how much an object’s light has shifted into longer wavelengths as a result of the expansion of the Universe. Astronomers use “redshift” to describe cosmic distances. 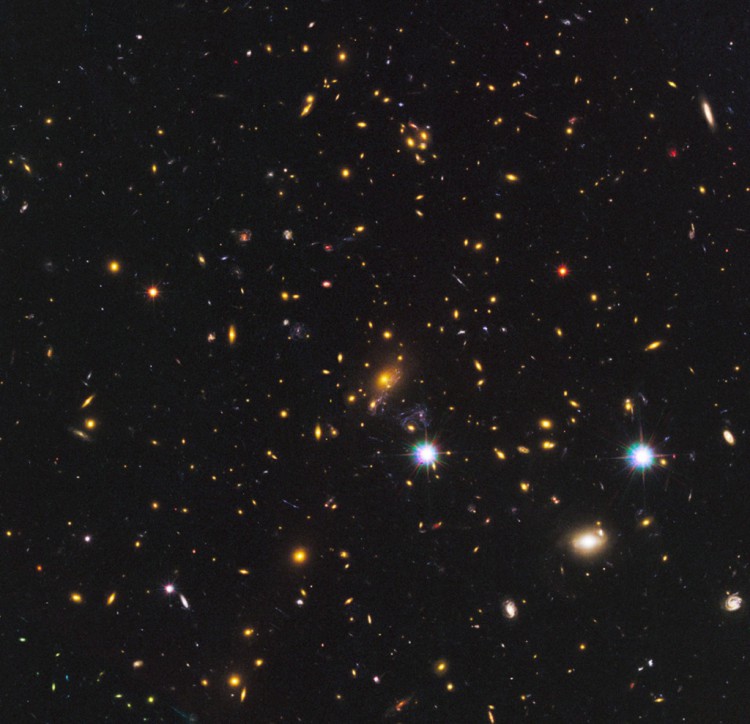 The many galaxies of a massive cluster called MACS J1149+2223 dominate the scene. Gravitational lensing by the giant cluster brightened the light from the newfound galaxy, known as MACS1149-JD, some 15 times, bringing the remote object into view. Image Credit: NASA, ESA, W. Zheng (JHU), M. Postman (STScI), and the CLASH Team

Unlike previous detections of galaxy candidates in this age range, which were only glimpsed in a single color, or waveband, this newfound galaxy has been seen in five different wavebands. As part of the Cluster Lensing And Supernova survey with Hubble (CLASH) program, the Hubble space telescope registered the newly described, far-flung galaxy in four wavelength bands, and Spitzer in a fifth band via its Infrared Array Camera (IRAC), placing the discovery on firmer ground.

Objects at these extreme distances are mostly beyond the detection sensitivity of today’s largest telescopes. To catch sight of these early, distant galaxies, astronomers rely on “gravitational lensing.” In this phenomenon—predicted by Albert Einstein a century ago—the gravity of foreground objects warps and magnifies the light from background objects. A massive galaxy cluster situated between our galaxy and the early galaxy magnified the latter’s light, brightening the remote object some 15 times and bringing it into view. 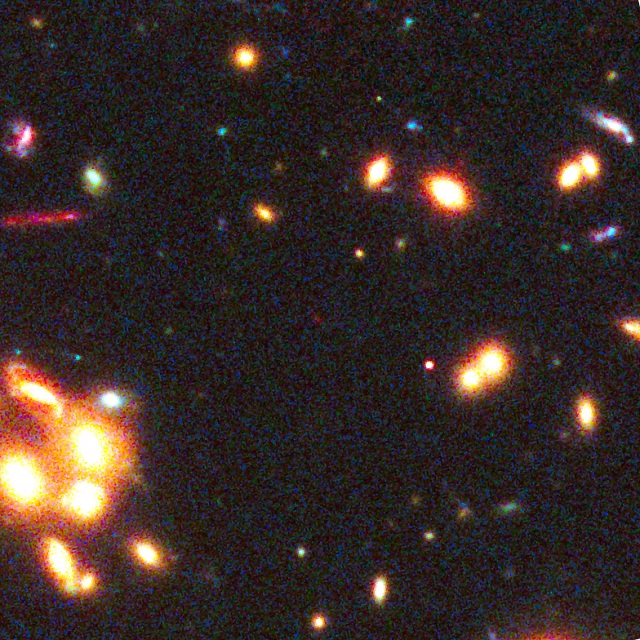 A partial zoom-in shows MACS1149-JD in more detail. In the visible and infrared light image from Hubble, MACS1149- JD looks like a dim, red speck. The small galaxy’s starlight has been stretched into longer wavelengths, or “redshifted,” by the expansion of the Universe. MACS1149-JD’s stars originally emitted the infrared light seen here at much shorter, higher-energy wavelengths, such as ultraviolet. Image Credit: NASA, ESA, W. Zheng (JHU), M. Postman (STScI), and the CLASH Team

Based on the Spitzer and Hubble observations, astronomers think the distant galaxy was spied at a time when it was less than 200 million years old. It also is small and compact, containing only about one percent of the Milky Way’s mass. According to leading cosmological theories, the first galaxies should indeed have started out tiny. They then progressively merged, eventually accumulating into the sizable galaxies of the more modern Universe.

These first galaxies likely played the dominant role in the epoch of reionization, the event that signaled the demise of theUuniverse’s Dark Ages. About 400,000 years after the Big Bang, neutral hydrogen gas formed from cooling particles. The first luminous stars and their host galaxies, however, did not emerge until a few hundred million years later. The energy released by these earliest galaxies is thought to have caused the neutral hydrogen strewn throughout the Universe to ionize, or lose an electron, a state which the gas has remained in since that time.

“In essence, during the epoch of reionization, the lights came on in the Universe,” said paper co-author Leonidas Moustakas, a research scientist at NASA’s Jet Propulsion Laboratory, a division of the California Institute of Technology.

Astronomers plan to study the rise of the first stars and galaxies and the epoch of reionization with the successor to both Spitzer and Hubble, NASA’s James Webb Telescope, slated for launch in 2018. The newly described, distant galaxy will likely be a prime target.

Holland Ford, one of Zheng’s colleagues and a co-author on the paper, commented on the findings:

“Science is very exciting when we explore the frontiers of knowledge. One of these frontiers is the first few hundred million years after the birth of our Universe. Dr. Zheng’s many years of searching for quasars and galaxies in the dawn of the Universe has paid off with his discovery of a galaxy that we see as it was when the Universe was less than 500 million years old,” said Ford, a physics and astronomy professor at Johns Hopkins. “With his discovery, we are seeing a galaxy when it was not even a toddler. But, this infant galaxy will in its future grow to be a galaxy like or own, hopefully hosting planetary systems with astronomers who will look back in time and see our galaxy in its infancy.”