NASA’s long-lived rover Opportunity has returned an image of the Martian surface that is puzzling researchers. Spherical objects concentrated at an outcrop called Kirkwood on the western rim of Endeavour Crater differ in several ways from iron-rich spherules nicknamed “blueberries” the rover found at its landing site in early 2004. 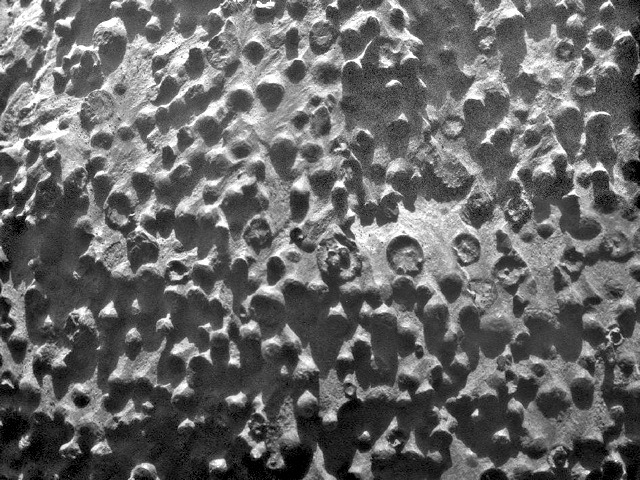 Using its Microscopic Imager, Opportunity photographed these small spherical objects on Sept. 6, 2012. The view covers an area about 2.4 inches across at an outcrop called “Kirkwood” on the western rim of Endeavour Crater. Image Credit: NASA/JPL-Caltech/Cornell Univ./ USGS/Modesto Junior College

“This is one of the most extraordinary pictures from the whole mission,” said Opportunity’s principal investigator, Steve Squyres of Cornell University in Ithaca, N.Y. “Kirkwood is chock full of a dense accumulation of these small spherical objects. Of course, we immediately thought of the blueberries, but this is something different. We never have seen such a dense accumulation of spherules in a rock outcrop on Mars.”

The spheres measure as much as one-eighth of an inch (3 millimeters) in diameter. The analysis is still preliminary, but it indicates that these spheres do not have the high iron content of Martian blueberries.

The Martian blueberries found elsewhere by Opportunity are concretions formed by action of mineral-laden water inside rocks, evidence of a wet environment on early Mars. Concretions result when minerals precipitate out of water to become hard masses inside sedimentary rocks. Many of the Kirkwood spheres are broken and eroded by the wind. Where wind has partially etched them away, a concentric structure is evident.

Opportunity is on the verge of completing the first Martian Marathon. More than 8 years after landing on the Red Planet, Mars rover Opportunity is still running. Indeed, mission planners say the tireless robot is poised to complete a full marathon–the first ever long-distance race on an alien planet. Video Credit: Science@NASA
Opportunity used the microscopic imager on its arm to look closely at Kirkwood. Researchers checked the spheres’ composition by using an instrument called the Alpha Particle X-Ray Spectrometer on Opportunity’s arm.
“They seem to be crunchy on the outside, and softer in the middle,” Squyres said. “They are different in concentration. They are different in structure. They are different in composition. They are different in distribution. So, we have a wonderful geological puzzle in front of us. We have multiple working hypotheses, and we have no favorite hypothesis at this time. It’s going to take a while to work this out, so the thing to do now is keep an open mind and let the rocks do the talking.”

Just past Kirkwood lies another science target area for Opportunity. The location is an extensive pale-toned outcrop in an area of Cape York where observations from orbit have detected signs of clay minerals. That may be the rover’s next study site after Kirkwood. Four years ago, Opportunity departed Victoria Crater, which it had investigated for two years, to reach different types of geological evidence at the rim of the much larger Endeavour Crater.

The rover’s energy levels are favorable for the investigations. Spring equinox comes this month to Mars’ southern hemisphere, so the amount of sunshine for solar power will continue increasing for months. Indeed, Opportunity is on the verge of completing the first Martian Marathon.

“The rover is in very good health considering its 8-1/2 years of hard work on the surface of Mars,” said Mars Exploration Rover Project Manager John Callas of NASA’s Jet Propulsion Laboratory in Pasadena, Calif. “Energy production levels are comparable to what they were a full Martian year ago, and we are looking forward to productive spring and summer seasons of exploration.”