A University of New South Wale (UNSW)-led team of researchers has discovered a potentially habitable Earth-like planet that is only 16 light years away. 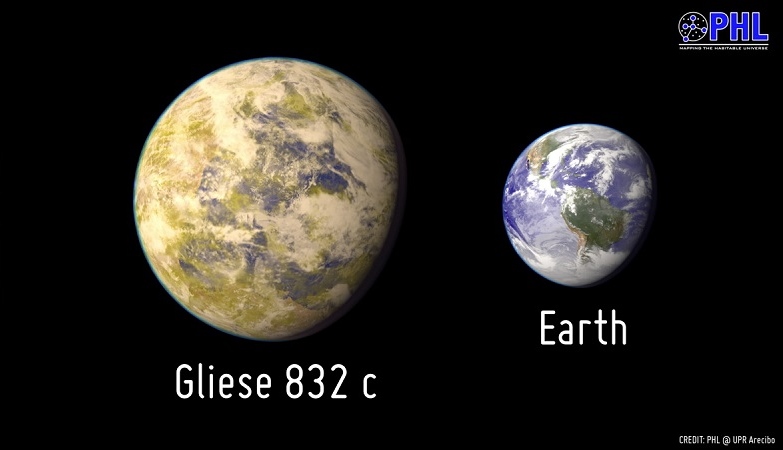 The “super-Earth” planet, GJ 832c, takes 16 days to orbit its red-dwarf star, GJ 832, and has a mass at least five times that of Earth. It receives about the same average stellar energy as Earth does, because red dwarfs shine more dimly than our Sun, and may have similar temperatures to our planet.

These characteristics put it among the top three most Earth-like planets, according to the Earth Similarity Index developed by scientists at the University of Puerto Rica in Arecibo.

The international team, led by Dr Robert Wittenmyer in the UNSW School of Physics, report their finding of the planet online ahead of publication in the Astrophysical Journal.

Team member and Head of UNSW’s Exoplanetary Science research group, Professor Chris Tinney, says that if the planet has a similar atmosphere to Earth it may be possible for life to survive, although seasonal shifts would be extreme. “However, given the large mass of the planet, it seems likely that it would possess a massive atmosphere, which may well render the planet inhospitable. A denser atmosphere would trap heat and could make it more like a super-Venus and too hot for life,” says Professor Tinney.

The planet was discovered from its gravitational pull on its parent star, which causes the star to wobble slightly. Members of the Anglo-Australian Planet Search team used the Anglo-Australian Telescope to make observations of the planet. Their data were combined with observations from the 6.5m Magellan Telescope and the European Southern Observatory 3.6m telescope (both in Chile) to make this new discovery.

This team had previously found, in 2009, that the star has a cold Jupiter-like planet with a near-circular orbit of about nine years, called Gliese 832b. “With an outer giant planet and an interior potentially rocky planet, this planetary system can be thought of as a miniature version of our Solar System,” says Professor Tinney.

On the Earth Similarity Index, or ESI, the highest ranking exoplanet is Gliese 667C c, which is about 23 light-years away. It has an ESI of 0.84 compared to Earth’s maximum score of 1.0 Next on the list is Kepler-62e with an ESI of 0.83, although it is much further away – about 1,200 light years distant. And the new planet – the closest at just 16 light-years away – comes in third with an ESI of 0.81. For comparison, the Milky Way is about 100,000 light years across.

The team includes researchers from Australia, the UK, Finland, the US, Italy and Chile.