Pristine material that matches comets in our own Solar System have been found in a dust belt around the young star Beta Pictoris by ESA’s Herschel space observatory. 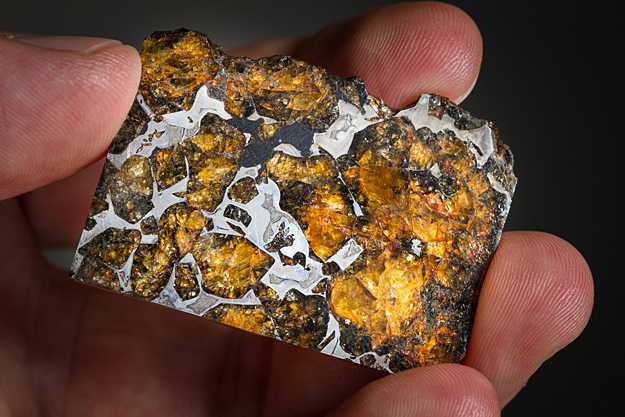 Close-up of olivine crystals seen inside a meteorite found on Earth that originated from a partly melted Solar System asteroid. The yellow olivine crystals are on the order of a few millimetres to centimetres in size and are held together by an alloy of iron and nickel. In contrast, the olivine crystals found in pristine comets, such as in the material measured in the Beta Pictoris system by ESA’s Herschel space observatory, are iron-poor but magnesium-rich. Image Credit: J. Debosscher, KU Leuven

Twelve-million-year-old Beta Pictoris resides just 63 light-years from Earth and hosts a giant gas planet along with a dusty debris disk that could, in time, evolve into a torus of icy bodies much like the Kuiper Belt found outside the orbit of Neptune in our Solar System.

Thanks to the unique observing capabilities of Herschel, the composition of the dust in the cold outskirts of the Beta Pictoris system has been determined for the first time.

Of particular interest was the mineral olivine, which crystallises out of the protoplanetary disk material close to newborn stars and is eventually incorporated into asteroids, comets and planets.

“As far as olivine is concerned, it comes in different ‘flavours’,” explains Ben de Vries from KU Leuven and lead author of the study reported in Nature.

“A magnesium-rich variety is found in small and primitive icy bodies like comets, whereas iron-rich olivine is typically found in large asteroids that have undergone more heating, or ‘processing’.”

Herschel detected the pristine magnesium-rich variety in the Beta Pictoris system at 15–45 astronomical units (AUs) from the star, where temperatures are around –190ºC. Infrared view of the Beta Pictoris solar system, obtained by combining data from the ADONIS instrument on ESO’s 3.6 m telescope (outer regions) and the NACO instrument on one of the 8.2 m units of ESO’s Very Large Telescope (inner region), and then subtracting the overpowering glare of the central star. The image shows a planet orbiting at roughly the same distance from Beta Pictoris as Saturn is from our own Sun, and a prominent dust disc in the outer reaches of the system. New observations from ESA’s Herschel space telescope have found magnesium-rich olivine crystals in the disk that likely originated from collisions between comets: the dust shares the same compositional characteristics as in several comets in our Solar System. Furthermore, the observation of these olivines in the outer dust disk suggest that they have been transported from their birthplace close to the central star, since they cannot form under the cold conditions found further out. Image Credits: ESO/A-M. Lagrange et al.

For comparison, Earth lies at 1 AU from our Sun and the Solar System’s Kuiper Belt extends from the orbit of Neptune at about 30 AU out to 50 AU from the Sun.

The Herschel observations allowed astronomers to calculate that the olivine crystals make up around 4% of the total mass of the dust found in this region.

In turn, this finding led them to conclude that the olivine was originally bound up inside comets and released into space by collisions between the icy objects.

“The 4% value is strikingly similar to that of Solar System comets 17P/Holmes and 73P/Schwassmann-Wachmann 3, which contain 2–10% magnesium-rich olivine,” says Dr de Vries.

“Since olivine can only crystallise within about 10 AU of the central star, finding it in a cold debris disk means that it must have been transported from the inner region of the system to the outskirts.”

The ‘radial mixing’ transport mechanism is known from models of the evolution of swirling protoplanetary disks as they condense around new stars.

The mixing is stimulated in varying amounts by winds and heat from the central star pushing materials away, along with temperature differences and turbulent motion created in the disk during planet formation.

“Our findings are an indication that the efficiency of these transport processes must have been similar between the young Solar System and within the Beta Pictoris system, and that these processes are likely independent of the detailed properties of the system,” says Dr de Vries.

Indeed, Beta Pictoris is over one and a half times the mass of our Sun, eight times as bright, and its planetary system architecture is different to our own Solar System today.

“Thanks to Herschel, we were able to measure the properties of pristine material left over from the initial planet-building process in another solar system with a precision that is comparable to what we could achieve in the laboratory if we had the material here on Earth,” says ESA’s Herschel project scientist Göran Pilbratt.