News by Subject » Miscellaneous » New Answers about the Russian Explosion

When the Sun rose over Russia’s Ural Mountains on Friday, Feb. 15th, many residents of nearby Chelyabinsk already knew that a space rock was coming. Later that day, an asteroid named 2012 DA14 would pass by Earth only 17,200 miles above Indonesia. There was no danger of a collision, NASA assured the public. 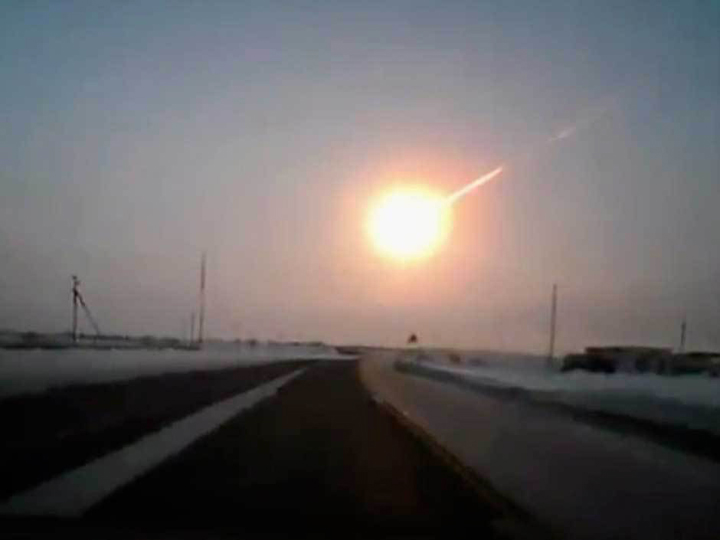 In this frame grab made from a video done with a dashboard camera, on a highway from Kostanai, Kazakhstan, to Chelyabinsk region, Russia, a meteorite contrail is seen. The meteor streaked across the sky of Russia’s Ural Mountains on Friday morning, Feb. 15, 2013, causing sharp explosions and reportedly injuring around 1200 people, including many hurt by broken glass. (AP Photo/Nasha gazeta, www.ng.kz)
Maybe that’s why, when the morning sky lit up with a second sun and a shock wave shattered windows in hundreds of buildings around Chelyabinsk, only a few people picking themselves off the ground figured it out right away. This was not a crashing plane or a rocket attack.

“It was a meteor strike–the most powerful since the Tunguska event of 1908,” says Bill Cooke of NASA’s Meteoroid Environment Office.

In a coincidence that still has NASA experts shaking their heads, a small asteroid completely unrelated to 2012 DA14 struck Earth only hours before the publicized event. The impactor flew out of the blue, literally from the direction of the Sun where no telescope could see it, and took everyone by surprise.

A new ScienceCast video reviews what researchers have learned about the Russian meteor.

“These are rare events and it is incredible to see them happening on the same day,” says Paul Chodas of NASA’s near-Earth Object Program at JPL.
Researchers have since pieced together what happened. The most telling information came from a network of infrasound sensors operated by the Comprehensive Test Ban Treaty Organization (CTBTO). Their purpose is to monitor nuclear explosions.

Infrasound is a type of very low-frequency sound wave that only elephants and a few other animals can hear. It turns out that meteors entering Earth’s atmosphere cause ripples of infrasound to spread through the air of our planet. By analyzing infrasound records, it is possible to learn how long a meteor was in the air, which direction it traveled, and how much energy it unleashed.

Listen to the infrasound recording, sped up 135x into the range of human hearing.

The Russian meteor’s infrasound signal was was the strongest ever detected by the CTBTO network. The furthest station to record the sub-audible sound was 15,000 km away in Antarctica.


Western Ontario Professor of Physics Peter Brown analyzed the data: “The asteroid was about 17 meters in diameter and weighed approximately 10,000 metric tons,” he reports. “It struck Earth’s atmosphere at 40,000 mi (65,000 km) per hour and broke apart about 12 to 15 miles (19 to 24 km) above Earth’s surface. The energy of the resulting explosion exceeded 470 kilotons of TNT.” For comparison, the first atomic bombs produced only 15 to 20 kilotons.

Based on the trajectory of the fireball, analysts have also plotted its orbit. “It came from the asteroid belt, about 2.5 times farther from the Sun than Earth,” says Cooke.

This is a virtual exploration of the preliminary orbit computed by Zuluaga & Ferrin (2013). Using the trajectories shown in this video, the researchers were able to calculate the trajectory of the meteorite as it fell to Earth and use it to reconstruct the orbit in space of the meteoroid before its violent encounter with our planet … through their calculations, Zuluaga and Ferrin determined the rock originated from the Apollo class of asteroids. (The Apollo asteroids can get farther from the Sun than Earth, but they also sometimes come within Earth’s orbit. They are considered Earth-crossers, and some can get very close to the Earth, as the February 15 asteroid over Russia clearly demonstrated.) Scientific details can be found at arxiv:1302.5377

Comparing the orbit of the Russian meteor to that of 2012 DA14, Cooke has shown that there is no connection between the two. “These are independent objects,” he says. “The fact that they reached Earth on the same day, one just a little closer than the other, appears to be a complete coincidence.” (see above)

Infrasound records confirm that the meteor entered the atmosphere at a shallow angle of about 20 degrees and lasted more than 30 seconds before it exploded. The loud report, which was heard and felt for hundreds of miles, marked the beginning of a scientific scavenger hunt. Thousands of fragments of the meteor are now scattered across the Ural countryside, and a small fraction have already been found.

Preliminary reports, mainly communicated through the media, suggest that the asteroid was made mostly of stone with a bit of iron–“in other words, a typical asteroid from beyond the orbit of Mars,” says Cooke. “There are millions more just like it.”


And that is something to think about as the cleanup in Chelyabinsk continues.