The early galaxies of the Universe were very different from today’s galaxies. Using new detailed studies carried out with the ESO Very Large Telescope and the Hubble Space Telescope, researchers, including members from the Niels Bohr Institute, have studied an early galaxy in unprecedented detail and determined a number of important properties such as size, mass, content of elements and have determined how quickly the galaxy forms new stars. The results are published in the scientific journal, Monthly Notices of the Royal Astronomical Society. 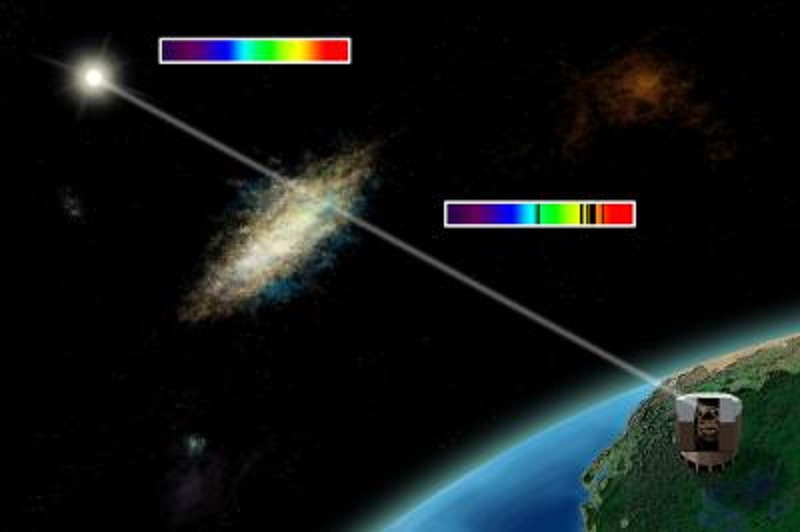 Quasars are among the brightest objects in the Universe and can be used as lighthouses to study the Universe between the quasars and Earth. Here researchers have discovered a galaxy that lies in front of a quasar and by studying the absorption lines in the light from the quasar, they have measured the elemental composition in the galaxy in great detail, despite the fact that we are looking approximately 11 billion years back in time.  Graphic: Chano Birkelind

“Galaxies are deeply fascinating objects. The seeds of galaxies are quantum fluctuations in the very early Universe and thus, understanding of galaxies links the largest scales in the Universe with the smallest. It is only within galaxies that gas can become cold and dense enough to form stars and galaxies are therefore the cradles of stars-births”, explains Johan Fynbo, professor at the Dark Cosmology Centre at the Niels Bohr Institute at the University of Copenhagen.

Early in the Universe, galaxies were formed from large clouds of gas and dark matter. Gas is the Universe’s raw material for the formation of stars. Inside galaxies the gas can cool down from the many thousands of degrees it has outside galaxies. When gas is cooled it becomes very dense. Finally, the gas is so compact that it collapses into a ball of gas where the gravitational compression heats up the matter, creating a glowing ball of gas – a star is born.

In the red-hot interior of massive stars, hydrogen and helium melt together and form the first heavier elements like carbon, nitrogen, oxygen, which go on to form magnesium, silicon and iron. When the entire core has been converted into iron, no more energy can be extracted and the star dies as a supernova explosion. Every time a massive star burns out and dies, it hence flings clouds of gas and newly formed elements out into space, where they form gas clouds that get denser and denser and eventually collapse to form new stars. The early stars contained only a thousandth of the elements found in the Sun today. In this way, each generation of stars becomes richer and richer in heavy elements. 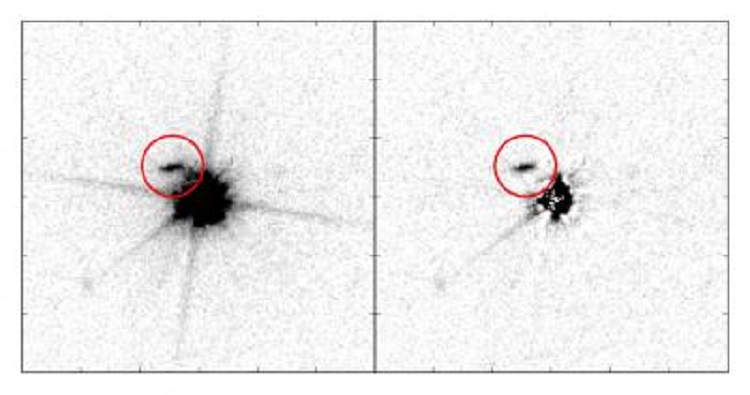 Using the Hubble Space Telescope, researchers have been able to pinpoint the galaxy causing the absorption in the quasar lying behind it. In the image to the left the quasar is seen as the bright source in the center, while the absorbing galaxy, which lies in front of the quasar, is seen to the left and slightly above the quasar. In the image to the right, most of the light from the quasar is removed so the galaxy is seen more clearly. The distance between the center of the galaxy and point were the light from the quasar passes is approximately 20,000 light-years, which is slightly less than the distance between the Sun and the center of the Milky Way. Image Credit: Hubble Space Telescope

In today’s galaxies, we have a lot of stars and less gas. In the early galaxies, there was a lot of gas and fewer stars.

“We want to understand this cosmic evolutionary history better by studying very early galaxies. We want to measure how large they are, what they weigh and how quickly stars and heavy elements are formed,” explains Johan Fynbo, who has lead the research together with Jens-Kristian Krogager, PhD student at the Dark Cosmology Centre at the Niels Bohr Institute.

The research team has studied a galaxy located approximately 11 billion years back in time in great detail. Behind the galaxy is a quasar, which is an active black hole that is brighter than a galaxy. Using the light from the quasar, they found the galaxy using the giant telescopes, VLT in Chile. The large amount of gas in the young galaxy simply absorbed a massive amount of the light from the quasar lying behind it. Here they could ‘see’ (i.e. via absorption) the outer parts of the galaxy. Furthermore, active star formation causes some of the gas to light up, so it could be observed directly.

With the Hubble Space Telescope they could also see the recently formed stars in the galaxy and they could calculate how many stars there were in relation to the total mass, which is comprised of both stars and gas. They could now see that the relative proportion of heavier elements is the same in the center of the galaxy as in the outer parts and it shows that the stars that are formed earlier in the center of the galaxy enrich the stars in the outer parts with heavier elements.

“By combining the observations from both methods – absorption and emission – we have discovered that the stars have an oxygen content equivalent to approximately 1/3 of the Sun’s oxygen content. This means that earlier generations of stars in the galaxy had already built up elements that made it possible to form planets like Earth 11 billion years ago,” conclude Johan Fynbo and Jens-Kristian Krogager.

The article in the Monthly Notices of the Royal Astronomical Society can be read here.

Source: The Niels Bohr Institute at the University of Copenhagen