Researchers from Bern have developed a method to simplify the search for Earth-like planets: By using new theoretical models they rule out the possibility of Earth-like conditions, and therefore life, on certain planets outside our Solar System – and limit their search by doing so. 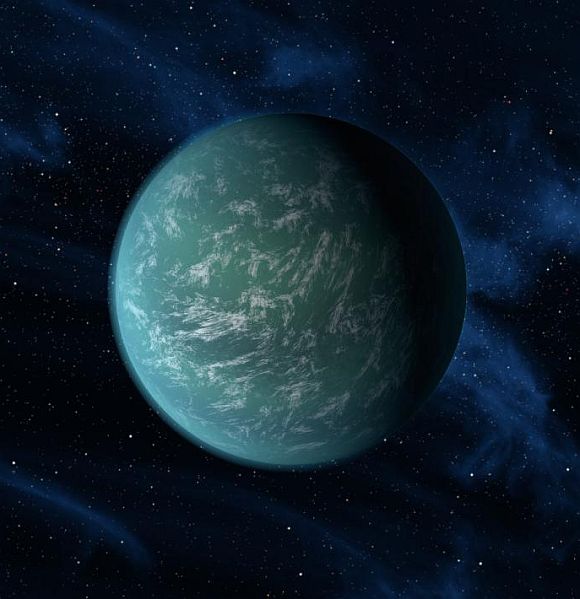 An artist’s perception of the planet Kepler-22b, discovered by the Kepler Space Telescope. Whether this is a terrestrial planet or not, could be revealed by the ratio between its mass and its radius. Image Credit: NASA/Ames/JPL-Caltech

Currently extensive observational programmes are being developed all over the world, with the aim to detect planets outside our Solar System that are able to accommodate life – a sheer impossible task. “The question whether so-called exoplanets are habitable or not is difficult to answer, as we do not know all the necessary conditions a planet has to fulfill in order to be habitable”, said Yann Alibert of the Center for Space and Habitability (CSH) at the University of Bern.

This is why the Bernese scientist chose an alternative approach for his study, which is published in the journal Astronomy & Astrophysics: Based on the mass and radius of a planet Yann Alibert was able to determine criteria that exclude the possibility of life as we know it. The data required first, planetary mass, is for example provided by the HARPS-spectrograph in Chile, which was developed by the University of Geneva and Bern in cooperation with further partners.

From 2017 the space telescope CHEOPS, developed and built under the supervision of the ESA and the CSH, will be used to accurately determine the radius of certain planets, the second required data. Thanks to Yann Alibert’s method, one is able to deduce whether a planet is unhabitable from the data provided by HARPS and CHEOPS. “This theoretical model will help astronomers concentrate on promising candidates in their search for Earth-like planets”, says Alibert.

No life without a Carbon cycle or water in liquid form

Two conditions, without which life is not possible, form the foundation of the theoretical models: Water in liquid form and a so-called Carbon cycle must be found on the exoplanet. The Carbon cycle is a geological process that regulates the CO2-level in the atmosphere and with that, the temperature of the planet’s surface: In the ocean, CO2, in its dissolved form, undergoes a chemical reaction and is then transported into the Earth mantle. Because of the high temperature in the inner parts of the Earth mantle, the CO2 is released back into the atmosphere during volcanic eruptions.

If, however, a planet with a given mass has a very large radius, the density will be very low. Consequently there will be no Carbon cycle or liquid water on that planet. The reason for this is that low density is an indicator for a lot of gas and/or water. If a planet consists of a lot of gas, the atmospheric pressure on the surface may be so high that water is not able to keep its liquid form.

If the planet is covered by an immense amount of water, the pressure at the bottom of the ocean will increase to such an extent that water occurs in the form of “Ice VII”, which does not exist on Earth. Ice VII has such a high density so that it settles on the ocean floor. There, it forms a barrier between the rocks on the ocean floor and the water above – preventing the Carbon cycle. “Our study shows that a planet, that consists of a lot of gas or water, is not habitable”, explained Yann Alibert.

Most “Super Earths” are not habitable

The largest radius, at which a Carbon cycle and liquid water can occur, depends on the planetary mass: A planet with the same mass as Earth can have, at the maximum, a radius 1.7 times the Earth radius, including the gas and hydrosphere. A “Super Earth”, 12 times more massive than Earth, can have a radius 2.2 times the Earth radius. However, according to Alibert, mainly larger exoplanets have been discovered up until now. In the near future, smaller and more promising planets will be targeted, thanks, in particular, to the CHEOPS’s high sensitivity.