A pair of mathematicians — one from Indiana University and the other from Sichuan University in China — have proposed a unified theory of dark matter and dark energy that alters Einstein’s equations describing the fundamentals of gravity. 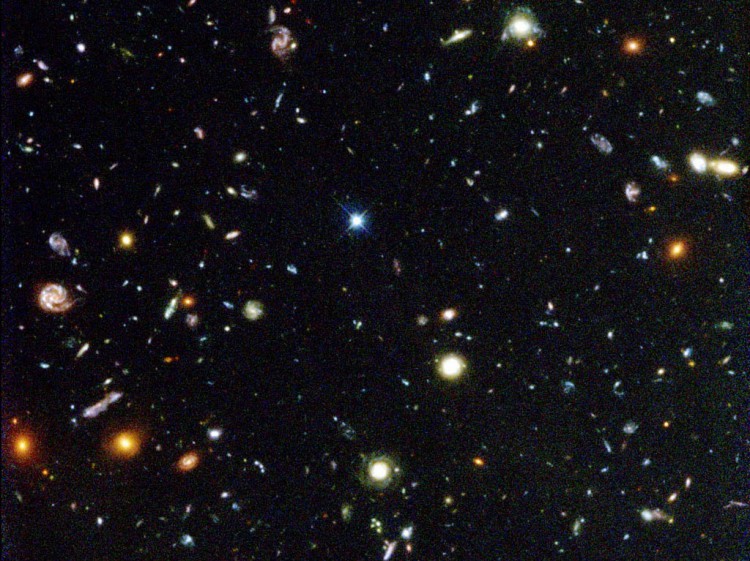 The Hubble deep field is a picture of the furthest we have ever seen out into space. The Hubble telescope stared out into a patch of sky around the size of a grain of sand for around 7 days, gathering and processing information, and day by day zooming its lenses deeper and deeper into the cosmos, even deeper than we ever thought possible. Every single point of light you see in this picture above is an entire galaxy, just gleaming in the darkness of space. Image Credit: NASA

Shouhong Wang, a professor in the IU College of Arts and Sciences’ Department of Mathematics, and Tian Ma, a professor at Sichuan University, suggest the law of energy and momentum conservation in space-time is valid only when normal matter, dark matter and dark energy are all taken into account. For normal matter alone, energy and momentum are no longer conserved, they argue.

While still employing the metric of curved spacetime that Einstein used in his field equations, the researchers argue the presence of dark matter and dark energy — which scientists believe accounts for at least 95 percent of the Universe — requires a new set of gravitational field equations that take into account a new type of energy caused by the non-uniform distribution of matter in the Universe. This new energy can be both positive and negative, and the total over spacetime is conserved, Wang said.

It is curved spacetime, along with a new scalar potential field representing the new energy density, and the interactions between the two that form the foundation for the new gravitational field equations.

“Many people have come up with different theories for dark energy,” Wang said. “Unfortunately, the mystery remains, and in fact, the nature of dark energy is now perhaps the most profound mystery in cosmology and astrophysics. It is considered the most outstanding problem in theoretical physics.

“The other great mystery concerning our Universe is that it contains much more matter than can be accounted for in our visible stars. The missing mass is termed as dark matter, and despite many attempts at detecting dark matter, the mystery remains and even deepens.”

Sichuan University professor Tian Ma, left, and IU Department of Mathematics professor Shouhong Wang have developed a unified theory of dark matter and dark energy they believe could change our view of energy, gravitational interactions and the structure and formation of the universe. Image Credit: Indiana University

The researchers postulate that the energy-momentum tensor of normal matter is no longer conserved and that new gravitational field equations follow from Einstein’s principles of equivalence and general relativity, and the principle of Lagrangian dynamics, just as Einstein derived his field equations. Wang said the new equations were the unique outcome of the non-conservation of the energy-momentum tensor of normal matter.

When Einstein developed his theory, dark energy and dark matter had not yet been discovered, so it was natural for him to start his theory using the conservation law of energy and momentum of normal matter, Wang added.

Tensors provide a concise framework for solving general relativity problems and the energy-momentum tensor quantifies the density and current of energy and momentum in spacetime. The second-order covariant derivative would be the geometric analog of a second order derivative in calculus which measures how the rate of change of a quantity is itself changing.

Associated with the scalar field is a scalar potential energy density consisting of positive and negative energies and representing a new type of energy caused by the non-uniform distribution of matter in the Universe. The scalar potential energy density varies as the galaxies move and matter redistributes, affecting every part of the Universe as a field.

“Most importantly, this new energy and the new field equations offer a unified theory for both dark energy and dark matter, which until now have been considered as two totally different beasts sharing only ‘dark’ in name,” he said. “Both dark matter and dark energy can now be represented by the Sum of the new scalar potential energy density and the coupling energy between the energy-momentum tensor and the scalar potential field.”

“In a nutshell, we believe that new gravity theory will change our view on energy, gravitational interactions, and the structure and formation of our Universe,” Wang said.

Kevin Zumbrun, chair of the Department of Mathematics at IU Bloomington, said the new unified theory looked sound in principle.

“It is speculative at the cosmological level, since one must match with experiment, but the math is solid,” he said. “It’s a new and elegant angle on things, and if this does match experiment, it is a huge discovery. Quite exciting!”

Wang said the new field equations also lead to a modified Newtonian gravitational force formula, which shows that dark matter plays a more important role in a galactic scale at about 1,000 to 100,000 light years, but is less important in the larger scale, where dark energy will be significant (more than 10 million light years).

“This unified theory is consistent with general characterizations of dark energy and dark matter, and further tests of the theory up to measured precisions of cosmic observations are certainly crucial for an eventual validation of the theory,” Wang added.