News by Subject » Astrophysics » No Galaxy Is An Island, Entire of Itself

KIPAC scientists use X-ray observations show how galaxies shape their environment, and vice-versa

A major component of our understanding of galaxy evolution that has remained elusive is the influence of the local environment on the galaxy, especially when discussing galaxies in large clusters. Galaxy clusters, the largest gravitationally bound objects in the Universe, are most widely known as the home of significant concentrations of galaxies. However, many people are not aware that around six times as much matter as can be found in the galaxies exists in the form of hot diffuse gas that resides between the galaxies. Beyond that, even a whole lot more matter is in the form of dark matter, dominating the total mass. 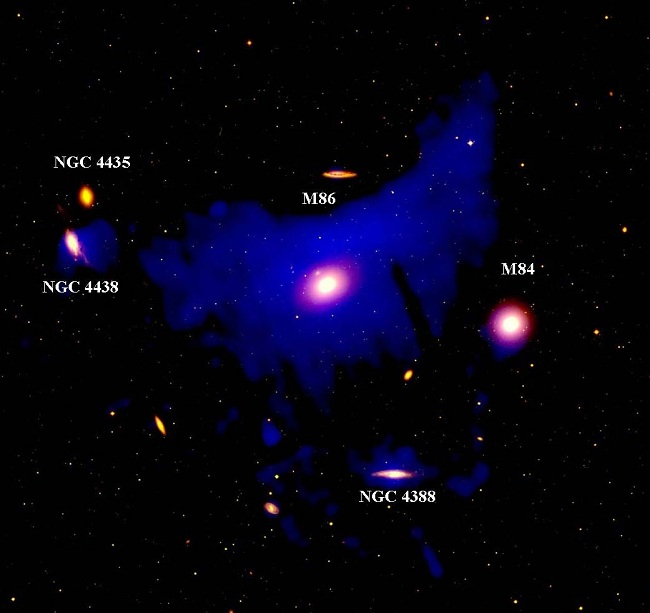 The Virgo galaxy cluster with X-ray gas brightness shown in blue, on top of an optical image shown in red and green. Image Credit: KIPAC

The hot gas associated with clusters glows in X-ray light, so that they appear to us as big structures in X-rays. The cluster gas has been observed to span distances of a million light-years or more from the cluster centers, and it has a crucial influence on how the galaxies evolve. Arguably the most important mechanism by which galaxies evolve in clusters is known as “ram pressure stripping”, where gas initially bound to the galaxies is lost to the surrounding hot gas due to the motion of galaxies throughout the cluster. This can be seen dramatically in long tails of gas that trail 500,000 light-years or more behind galaxies.

While simple estimates of the effects of ram pressure stripping provide a partial understanding of this process, a far more complex understanding is necessary to explain the properties of the stripped tails already observed. The structure of magnetic fields and turbulence in the stripped gas can be inferred from careful studies of the geometry and temperature structure of these structures, whose ultimate fate after being stripped from their galaxies remains unknown.

A team led by KIPAC PhD Student Steven Ehlert has published a new study of the nearby Virgo Cluster that demonstrates the ubiquity and variety of ram pressure in cluster member galaxies. Ehlert worked with KIPAC postdocs Norbert Werner and Aurora Simionescu, Professor Steve Allen, and alumnus Evan Million (now at the University of Alabama at Tuscaloosa), in collaboration with Jeffrey Kenney at Yale University and Alexis Finoguenov at the University of Helsinki.

Their analysis used data from a total of five separate pointings with ESA’s XMM-Newton X-Ray Space Telescope of galaxies at the nearby Virgo galaxy cluster. When combining the information from all five overlapping pointings with archival optical and ultraviolet images in this same direction, new insights into the thermodynamic structure of both the galaxies and the ICM appeared.

All four of the X-ray detected galaxies in this field are seen to be undergoing ram pressure stripping, although the particular signatures of the stripping differ at all four sites. The two most massive galaxies (known as M84 and M86) have long tails of X-ray emitting gas in the wake of their motion through the Virgo Cluster. The two less massive galaxies (NGC 4438 and NGC 4388) are also undergoing ram pressure stripping, and NGC 4438 in particular shows evidence for a recent collision with nearby M86. In the wake of the collision, a long bridge of filamentary X-ray and optical emission stretches between the galaxies, one that shows the complex physics of mixing and heating at work once gas has been stripped from galaxies in clusters.

These four sites of stripped X-ray gas demonstrate that the nature of ram pressure stripping can vary significantly from site to site. The presence of stripped gas associated with all four of the largest galaxies in this field of view indicates that, while the particular astrophysical details may vary from site to site, ram pressure stripping is a common occurrence in cluster member galaxies, and has important implications for the heating and enrichment of the cluster gas.

This work is described in part in a paper to appear in the Monthly Notices of the Royal Astronomical Society (MNRAS) and available from astro-ph at arXiv:1212.3612.

Source: The Kavli Institute for Particle Astrophysics and Cosmology (KIPAC)