News by Subject » “Old Young” Stars in the Eagle Nebula

The early stages of a star’s life are critical both for the star and for any future planets that might develop around it. The process of star formation, once thought to involve just the simple coalescence of material under the influence of gravity, actually entails a complex series of stages, with the youngest stars assembling circumstellar disks of material, possibly preplanetary in nature. 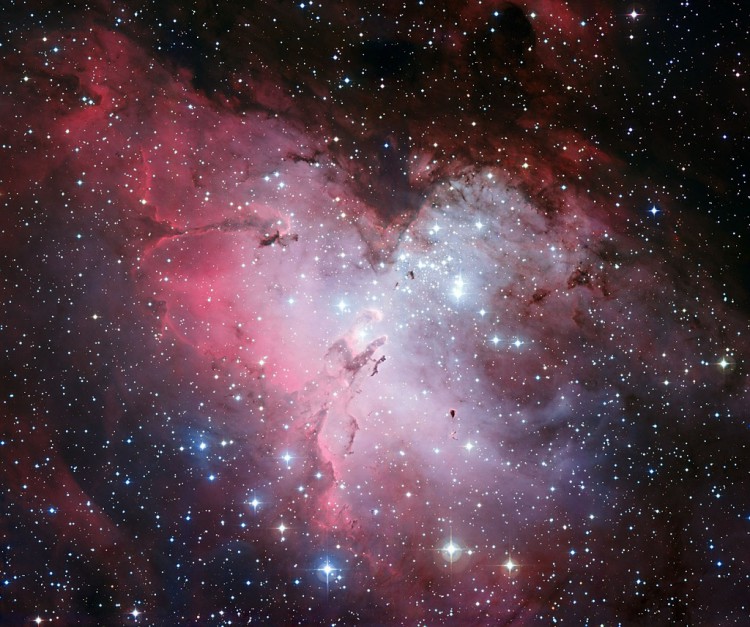 A composite infrared/optical image of the Eagle Nebula. The so-called “Pillars of Creation” can be seen at the center. Astronomers have discovered that the cluster of hot stars to the upper right contains many “old young” stars – stars that are still in their pre-main-sequence stage of life hosting circumstellar disks of material, but yet are about 16 million years old, many millions of years older than most other young stars in this first phase of life. Image Credit: ESO

In the current models, conservation of angular momentum during the collapse of cloud cores leads to the formation of these disks. The presence and evolution of these circumstellar disks is important both for the planets that form from them and for the star itself.

Stars start their lives by burning deuterium, an easier fuel to ignite than hydrogen (although it is less abundant). Stars that burn hydrogen are called main-sequence stars (the Sun is one), and they can continue in this stage of life for ten billion years or more depending on their mass (at least for stars of the Sun’s mass or less). Stars young enough to still primarily burn deuterium are called pre main-sequence stars, and this stage of their life typically lasts a few hundreds of thousands of years or less (also depending sensitively on the initial mass of the star).

The reason that circumstellar disks are so important for young stars (and not just for its planets) is because during the pre-main-sequence phase the star continues to grow in mass, and its growth comes from accreting gas from this disk. The time-scale of disk dissipation therefore sets crucial constraints for models of both star and planet development.

Understanding these early stages has been difficult for astronomers, in part because they take place in nurseries heavily obscured by dust, but they are critically important to an understanding of how our young Solar System and its planets were born and evolved.

CfA astronomer Mario Guarcello and three colleagues examined 110 stars located in the Eagle Nebula (associated with the so-called “Pillars of Creation,” a star forming region made famous by its dramatic Hubble portrait). These stars were red in color, typical of pre main-sequence stars, and like young stars they also showed evidence for accretion, but they were peculiar in being considerably less red than expected. The team analyzed the X-ray emission of the stars, their red color, total luminosity, and the abundance of certain elements.

The astronomers found convincingly that these pre main-sequence stars are old – in fact, around sixteen million years old and possibly as much as thirty million years old, making them the largest sample of such “old young” stars known. Besides improving our understanding of how stars develop, the team also determined the characteristic lifetime for the protoplanetary disks in these systems: it can last for about six million years, giving planets around such stars a longer time to form than had been imagined.