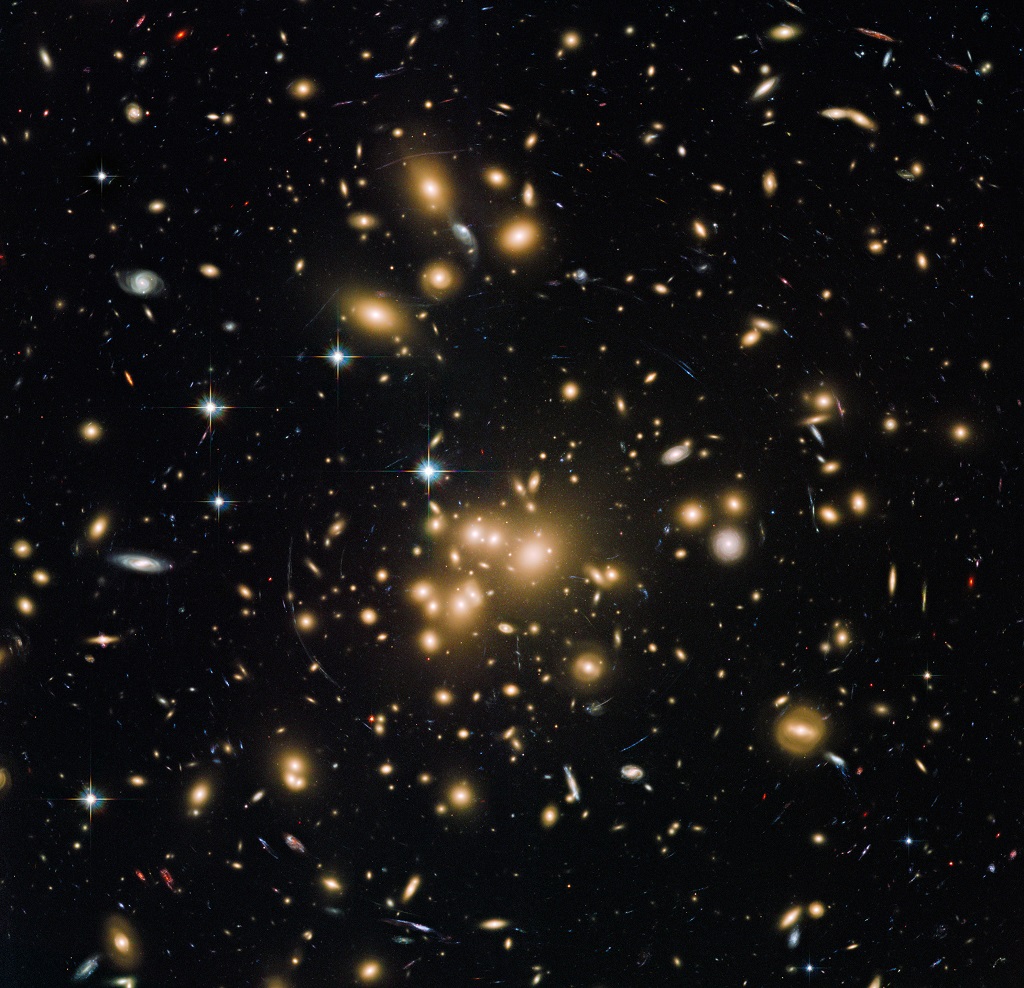 It is one of the biggest and most massive galaxy clusters known and acts as a gravitational lens, what is one of the predictions of Albert Einstein’s general theory of relativity. The gravity of the cluster’s trillion stars — plus dark matter — acts as a 2-million-light-year-wide lens in space. This gravitational lens bends and magnifies the light of the galaxies located far behind it, and making it possible for astronomers to explore incredibly distant regions of space. Some of the faintest objects in the picture are probably over 13 billion light-years away.

The yellow galaxies in this image belong to the cluster itself, while the blue streaks – circling and arcing around the fuzzy galaxies in the center – are background galaxies gravitationally lensed by the cluster. These streaks appear to be blue because the galaxies that form them are furiously forming very hot new stars. The emission from these hot young stars causes the blue hue. Abell 1689 has the largest system of gravitational arcs ever found.

One of the lensed galaxies (A1689-zD1) was at a distance of 12.8 billion light-years, the most distant galaxy ever found at the time of its discovery, in the year 2008. The image also includes a few nearby stars and some other galaxies that aren’t distorted, as well as over 160,000 (!!) globular clusters, the largest population ever found. (For comparison: our Milky Way, is only home to around 150 of these globulars.)

Globular clusters, which are dense, spherical collections of hundreds of thousands of stars that orbit a galactic core, are containing some of the oldest surviving stars in the Universe. Almost 95 percent of globular cluster formation occurred within the first 1 billion or 2 billion years after our Universe was born in the Big Bang some 13.7 billion years ago.

This image combines both visible and infrared data from Hubble’s Advanced Camera for Surveys (ACS) with a combined exposure time of over 34 hours to reveal this patch of sky in greater and striking detail than in previous observations.