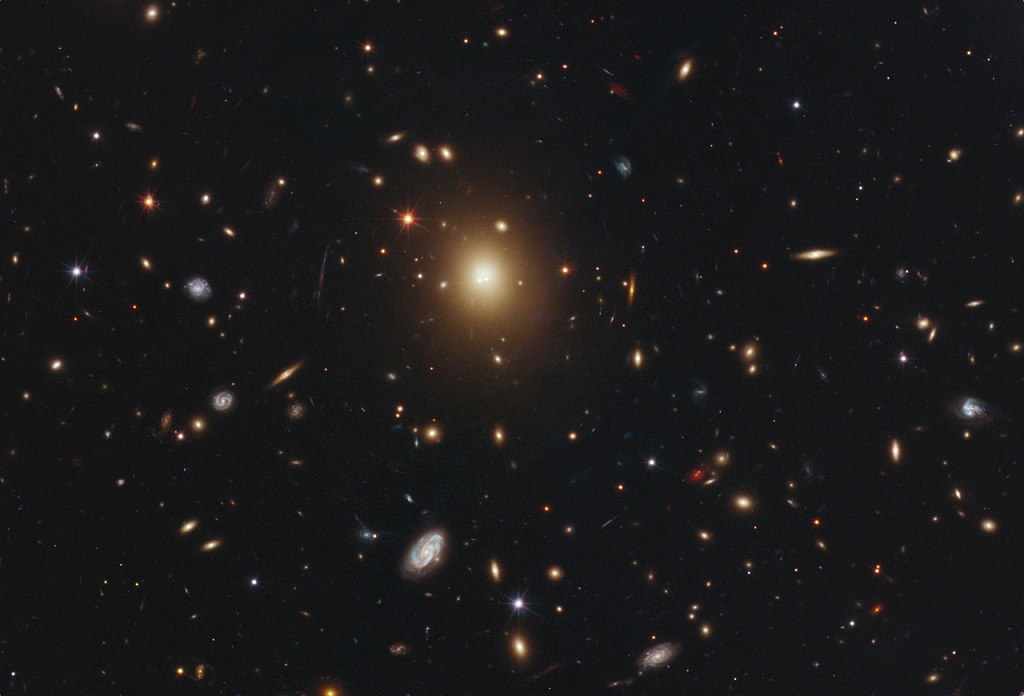 Abell 2261 is a massive galaxy cluster that lies some three billion light-years away from Earth in the constellation of Hercules (after a Roman mythological hero). Abell 2261 is speeding away from us at about 59,783 kilometers per second! (Galaxy clusters contain hundreds to thousands gravitational bound galaxies, hot gas and large amounts of dark matter.)

The giant elliptical galaxy in the center of this image, dubbed A2261-BCG (short for Abell 2261 Brightest Cluster Galaxy), is the most massive and brightest member of the galaxy cluster. Spanning a little more than one million light-years, the galaxy is about 10 times the diameter of our Milky Way galaxy, and the galaxy’s puffy core, measuring about 10,000 light-years, is the largest yet seen.

A galaxy’s core size typically is correlated to the dimensions of its host galaxy, but in this case, the central region is much larger than would be expected for the galaxy’s size. In fact, the bloated core is more than three times larger than the center of other very luminous galaxies.

A2261-BCG is a member of an unusual class of galaxies with a diffuse core filled with a fog of starlight where there would normally be a concentrated peak of light around a central black hole.

It is known that supermassive black holes, weighing millions or billions times more than the Sun, reside at the centers of nearly all galaxies and may play a role in shaping those central regions. However, astronomers found no supermassive black hole in A2261-BCG. They expected to see a slight cusp of light in the galaxy’s center, marking the location of the black hole and attendant stars. Instead, the starlight’s intensity appears to be fairly even across the galaxy.

Astronomers have proposed two possibilities for the puffy core. One scenario is that a pair of merging black holes that that still resides in the galaxy’s center (one of the black holes native to the galaxy, and a second one added from a smaller galaxy that was gobbled up by the massive elliptical) gravitationally stirred up and scattered the stars.

Another idea is that the merging black holes were ejected from the core, resulting in the rarity of a galaxy without a central black hole. The black hole is the anchor for the stars, if you take it out, all of a sudden the stars don’t get held down very well and they expand out, enlarging the core even more, and creating the puffy look.

The Abell 2261 cluster is one of 25 galaxy clusters being studied as part of the Cluster Lensing And Supernova survey with Hubble (CLASH) program, a major project to build a library of scientific data on lensing clusters, like the distribution of dark matter in clusters. Studies of the galaxy A2261-BCG may provide insight into how black hole behavior may shape the cores of galaxies.

This image was taken with the Wide Field Camera 3 of the Advanced Camera for Surveys on the Hubble Space Telescope to measure the amount of starlight across the giant galaxy, A2261-BCG. The observations were taken March to May 2011.