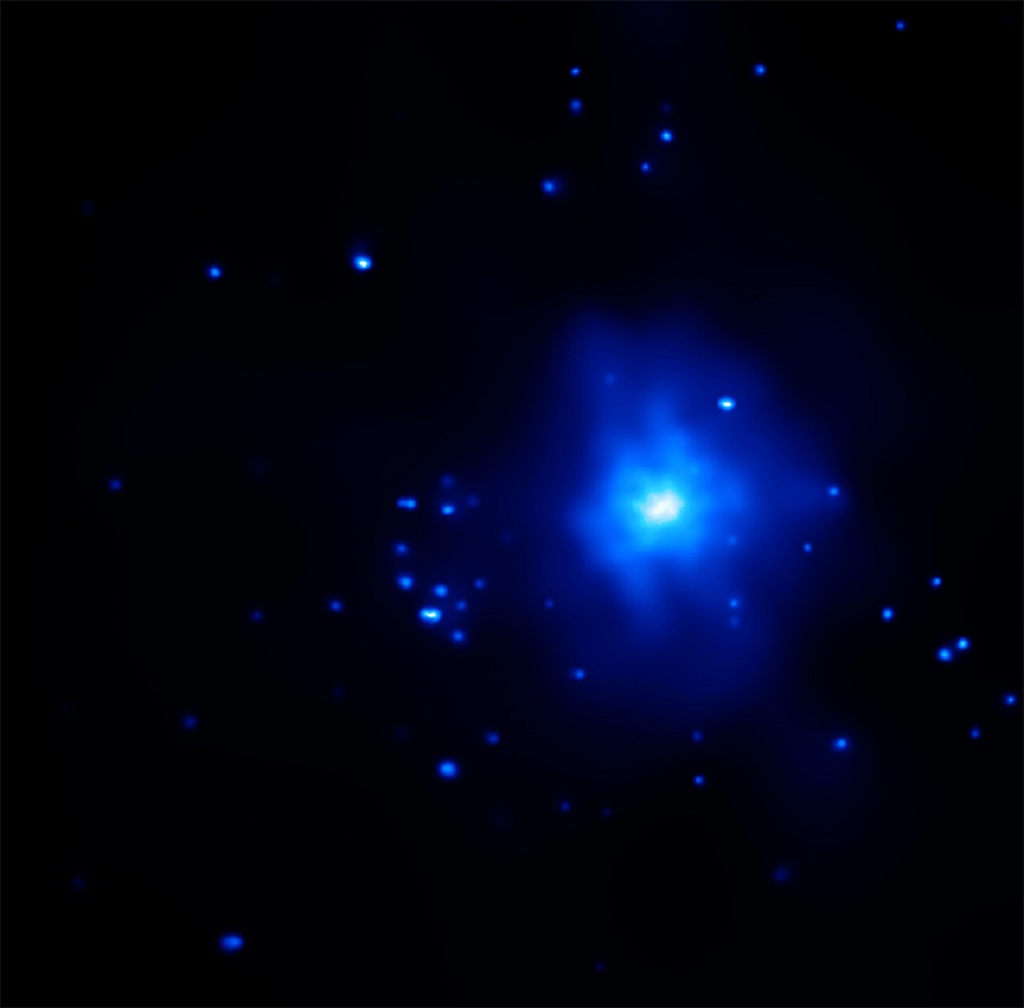 NGC 1399 is an elliptical galaxy of about 54,000 light-years across that lies 60 – 65 million light-years away in the southern constellation of Fornax, while it moves away from us at roughly 1422 kilometers per second. It is the central dominant galaxy in the Fornax cluster of galaxies which consists of 58 known galaxies.

A vast, diffuse envelope surrounds a bright center that probably contains a supermassive black hole with a mass of 500 million solar masses. NGC 1399 contains at least 37 planetary nebulae and between 5,700 and 6,500 globular clusters, of which the metal-rich, red clusters are more strongly concentrated toward the center than the metal-poor, blue clusters. Most blue clusters have likely been accreted during the assembly of the Fornax cluster, while the red clusters share the dynamical history of the galaxy itself.

The total mass of the galaxy is about ten times larger than the combined mass of the stars and nebulae in this galaxy. This indicates the presence of a very substantial amount of dark, “invisible” matter in NGC 1399. The galaxy is also probably embedded in a large dark matter halo.

NGC 1399 is an ultraluminous X-ray source (ULX). ULXs emit more X-rays than any known stellar X-ray source, but less than the bright X-ray sources associated with supermassive black holes in the centers of galaxies. Their exact nature has remained a mystery, but one suggestion is that some ULXs are intermediate-mass black holes with masses between about a hundred and a few thousand times that of the Sun.

The spectrum reveals emission from oxygen and nitrogen but no hydrogen, a rare set of signals from within globular clusters. The physical conditions deduced from the spectra suggest that the gas is orbiting a black hole of at least 1,000 solar masses.

Astronomers suggest that a white dwarf star strayed too close to an intermediate-mass black hole and was ripped apart by tidal forces. In this scenario the X-ray emission is produced by debris from the disrupted white dwarf star that is heated as it falls towards the black hole and the optical emission comes from debris further out that is illuminated by these X-rays. An interesting aspect of this ULX is that it is found within a globular cluster, a very old, very tight grouping of stars, what confirms the existence of intermediate-mass black holes within such clusters.

In this image X-rays from Chandra were overlaid on an optical image from the Hubble Space Telescope. X-rays are blue and the optical data are yellow.