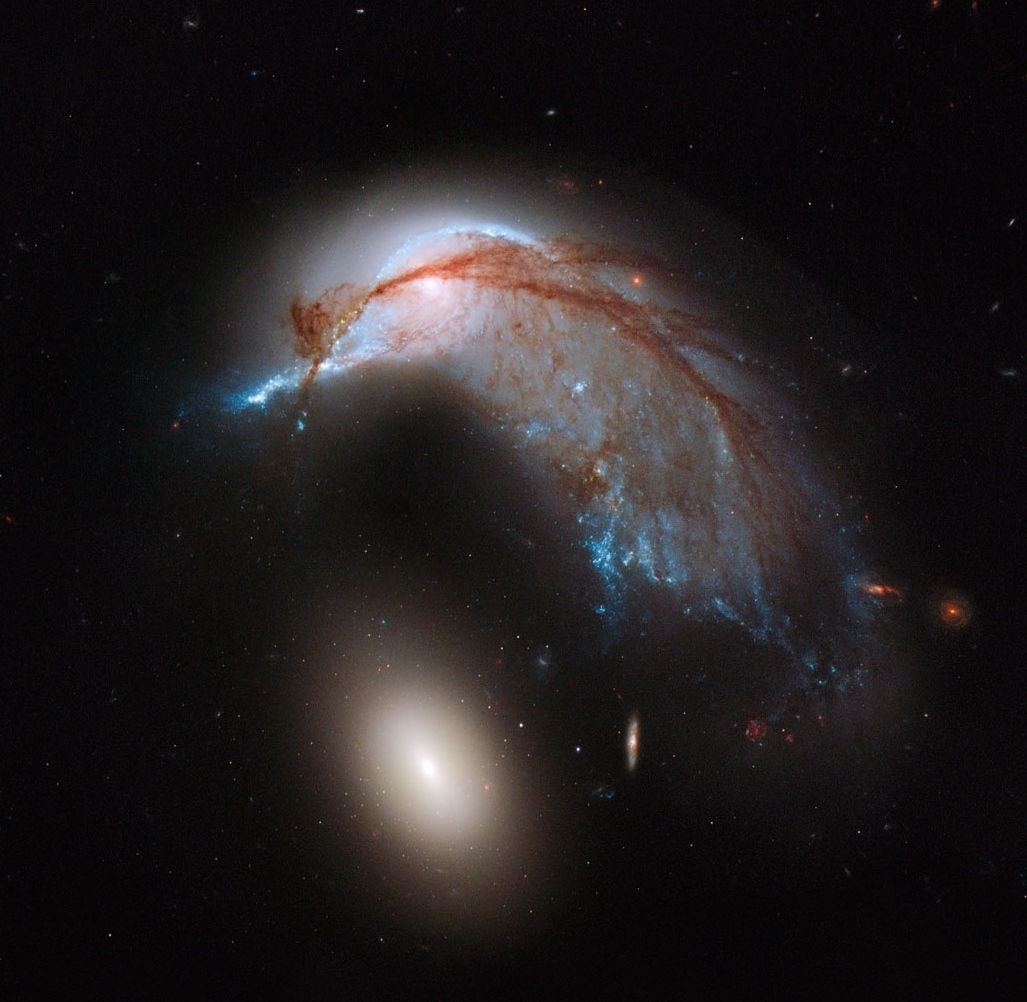 Arp 142 (also known as the Penguin with Egg) is a pair of interacting galaxies, containing the upper disturbed spiral galaxy NGC 2936 – hurrying away from us with approximately 6,989 kilometers per second – along with its smaller elliptical companion, NGC 2937 – receding from us at some 6,806 kilometers per second – at the lower left of this image. Arp 142 lies about 326 million light-years away from Earth in the southern constellation of Hydra (the Water Snake).

The name “Arp 142” derives from being included in Arp’s Atlas of Peculiar Galaxies, a catalog of 338 peculiar galaxies, drawn up by Halton Arp in the years from 1962 through 1967 and published by the California Institute of Technology. Arp’s catalog was based only on the visual appearance of galaxies and groups of galaxies, and not whether they were actually physically related to each other.

Just a few hundred million years ago, NGC 2936 (also called “the Porpoise Galaxy” or “the Celestial Bird”) was likely a normal spiral galaxy, but then it got too close to the relatively small elliptical galaxy NGC 2937. In a billion years or so the two galaxies will likely merge into one larger galaxy.

The star-forming spiral galaxy NGC 2936 is not only being deflected but also being distorted by the close gravitational interaction. It is warped into the profile of a celestial bird or porpoise by the gravitational tug of its companion NGC 2937. Once part of a flat, spiral disk, the orbits of NGC 2936’s stars have become scrambled due to gravitational tidal interactions with the other galaxy.

Gas and dust drawn from the heart of NGC 2936 becomes compressed during the encounter, which in turn triggers star formation. A burst of young blue stars forms the nose of NGC 2936 toward the left of this galaxy, while the center of the spiral appears as an eye. Dark dust lanes and bright blue star streams trail the galaxy to the lower right. The reddish dust, once within the galaxy, has been thrown out of the galaxy’s plane and into dark dust lanes that are silhouetted against the bright starlight from what is left of the nucleus and disk.

The companion elliptical, NGC 2937, is full of stars with little gas or dust present. The stars contained within the galaxy are mostly old, as evidenced by their reddish color. There are no blue stars that would be evidence of recent star formation. While the orbits of this elliptical’s stars may be altered by the encounter, it’s not apparent that the gravitational pull by its neighboring galaxy is having much of an effect.

This image is a combination of visible, red and infrared light, created from data gathered by the Wide Field Planetary Camera 3 (WFC3) aboard the NASA/ESA Hubble Space Telescope.