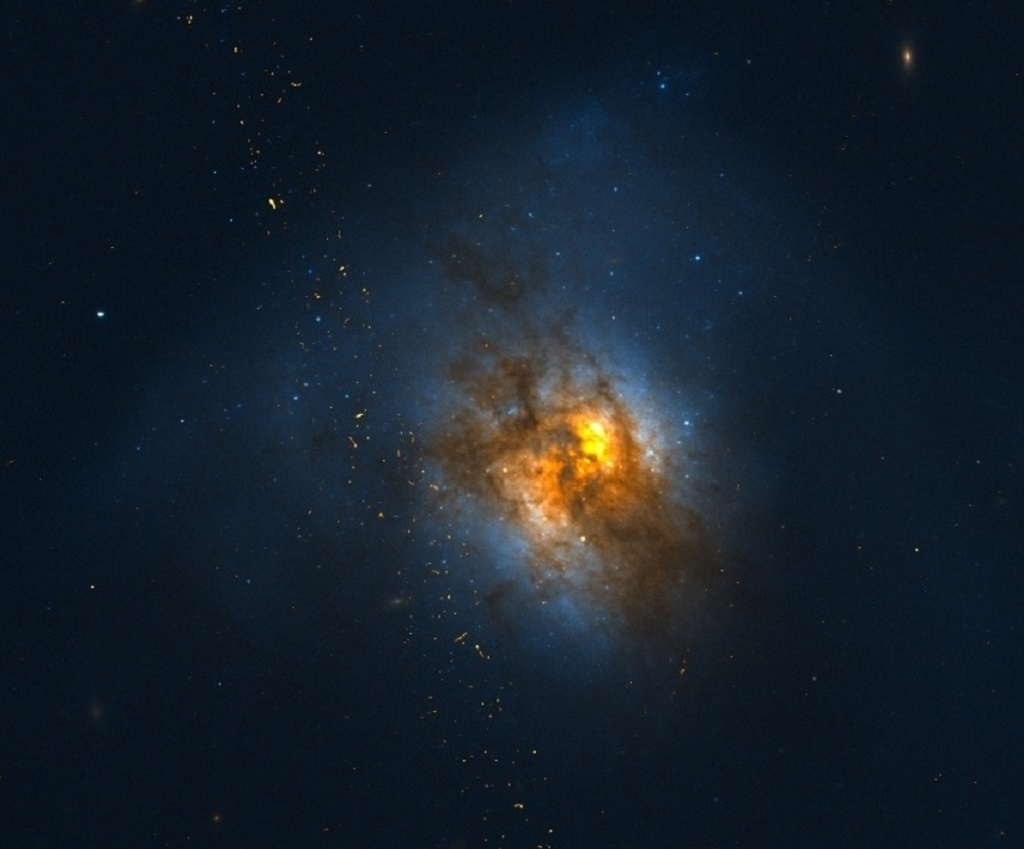 Arp 220 is the result of a collision between two galaxies which are now in the process of merging, situated some 250 million light-years away from Earth in the northern constellation of Serpens (the Serpent). It is receding from us at about 5434 kilometers per second.

It is a nearby example of the aftermath of two colliding galaxies; one cannot even see the two galaxies that combined to make up Arp 220. However, radio data show two objects 1,000 light-years apart that may represent the cores of the original galaxies

Arp 220 has an active galactic nucleus (AGN) at its core, a compact region at the center of a galaxy that has a much higher than normal luminosity; they are the most luminous sources in the Universe. A galaxy hosting an AGN is called an active galaxy. The radiation from an AGN is believed to be a result of accretion of mass by a supermassive black hole at the center of its host galaxy.

In the central part of Arp 220 are over 200 huge star clusters. The most massive of these clusters contains enough material to equal about 10 million suns, which is twice as massive as any comparable star cluster in our Milky Way Galaxy. Very high star-formation rates are required to form such supermassive star clusters.

The galaxy will continue to manufacture star clusters until it exhausts all of its gas, which at the current rate will happen in about 40 million years. This may seem like a long time, but it is practically a blink of an eye for a process occurring on a galactic scale. Then Arp 220 will look like the elliptical galaxies seen today, which have little gas. Some of the giant clusters — those that are now 100 million years old — will still be there.

The frantic burst of star formation in Arp 220 is happening in a very small region, about 5,000 light-years across, where the gas and dust is very dense. There is as much gas in that tiny region as there is in the entire Milky Way Galaxy. The starburst was fueled by a collision between two galaxies that began about 700 million years ago. The effects of the merger have stretched out over hundreds of millions of years.

Galaxies which are the Universe’s most efficient star-factories are also supernova factories. In October 2011, astronomers spotted a record-breaking seven supernovae in Arp 220, all found at the same time. Such relatively fresh supernovae are rare, also because they have short lives of a few decades maximum before they settle into supernova remnants. So discovering seven such supernovae at once is something amazing. Astronomers have also found evidence of large numbers of stellar black holes in Arp 220.

The galaxy is also the closest ultraluminous infrared galaxy (ULIRG) to Earth. ULIRGs are the products of mergers between galaxies, which can create firestorms of star birth. On average, ULIRGs spawn about 100 new stars yearly, as compared to our own galaxy which spawns one new star a year. Starlight from the new stars heats the surrounding dust, causing the galaxies to glow brilliantly in infrared light, while only a small amount of visible light escapes through the dusty galaxy.

In April 2007, astronomers from Arecibo Observatory radio telescope in Arecibo, Puerto Rico, have detected for the first time the molecules methanimine and hydrogen cyanide — two ingredients that build life-forming amino acids — in Arp 220. When combined with water, the molecules form glycene, the simplest amino acid and a building block of life on Earth.

This image is created with WikiSky’s image cutout tool from Hubble source data.