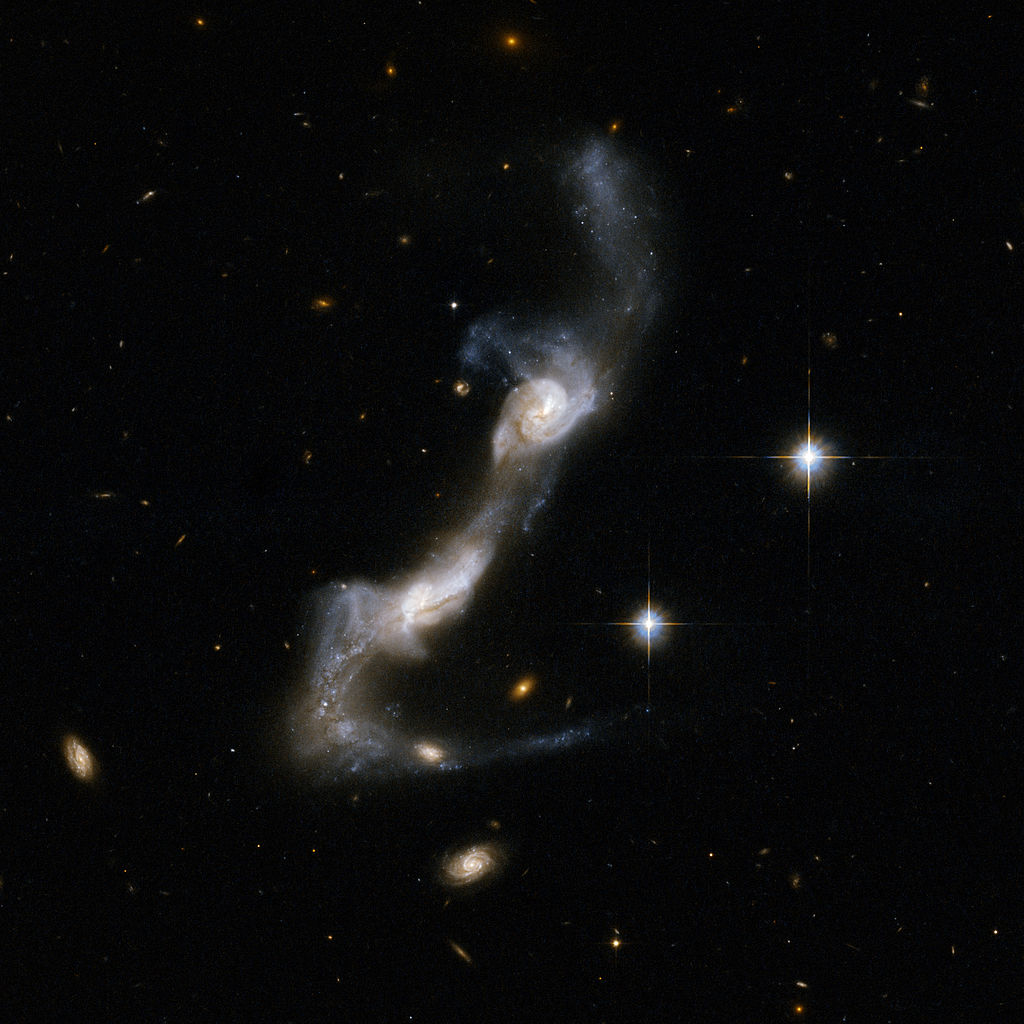 UGC 8335 (also designated Arp 238) is a strongly interacting pair of spiral galaxies, locted about 425 million light-years away in the northeast of the constellation Ursa Major. Their shapes have been severely disturbed by tidal interaction between the two galaxies.

It is the 238th galaxy in Arp’s Atlas of Peculiar Galaxies, a catalog of 338 peculiar galaxies produced by Halton Arp, which was originally published in 1966. His purpose for the atlas was to jump start research into these peculiar galaxies in the hope it would lead to better understanding of how galaxies behave and evolve.

The interaction has united the galaxies via a bridge of material and has yanked two strongly curved tails of gas and stars from the outer parts of their bodies. Both galaxies show dust lanes in their centers.

There is a third arm from the top galaxy’s core. Only 2 from the bottom galaxy’s core. This third arm is not in the same plane as the others but is headed mostly toward us rather at near right angles to the plane of the other arms. This could be pure illusion but the stars of it are clearly crossing the main disk turning it blue when it otherwise would be rather red in color. The stars of this arm are bluer than the other arms.

UGC 8335 is also one of the strongest MASER emitters. MASER is an acronym for Microwave Amplification by Stimulated Emission of Radiation. In MASER emission some molecules, such as the OH radical and the water molecule H2O, absorb energy either from collisions with other molecules or from stellar radiation and convert this energy into strong emission lines at radio wavelengths. The resulting strength of such emission lines is millions of times stronger than expected in normal interstellar clouds.

This image — oriented south up — is taken by the Hubble Space Telescope.
Image Credit: NASA, ESA, the Hubble Heritage (STScI/AURA)-ESA/Hubble Collaboration, and A. Evans (University of Virginia/NRAO/Stony Brook University)