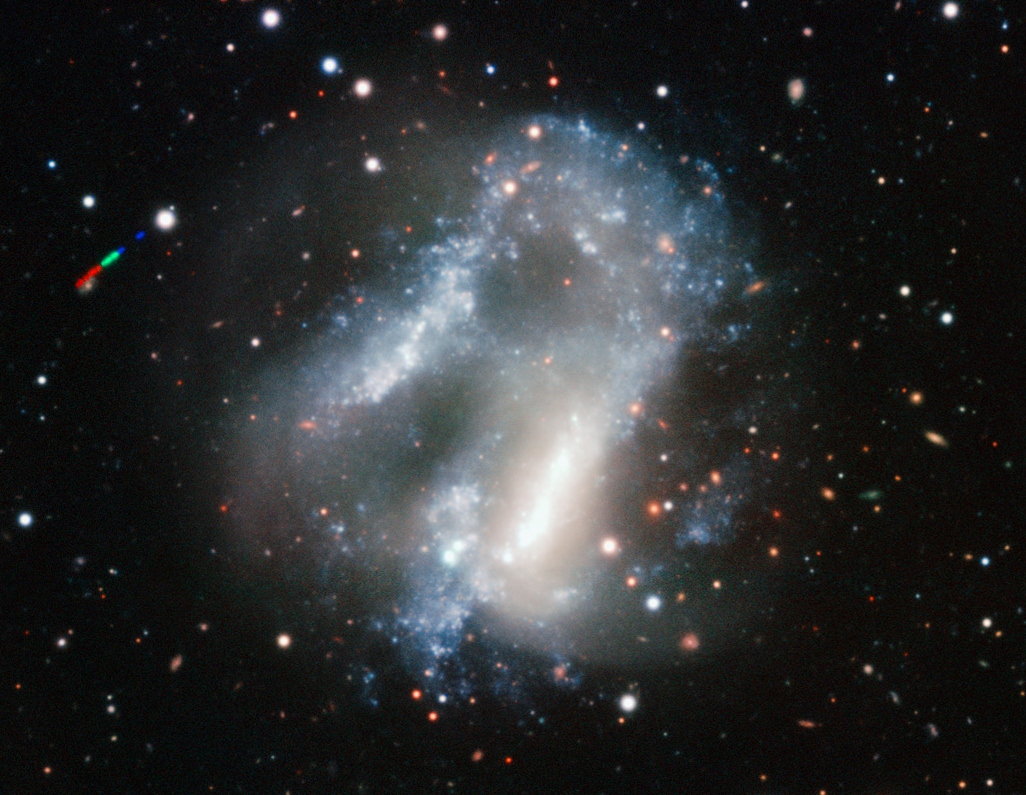 The interaction between the galaxies has considerably distorted their shapes, but as there is so much space between the stars, such an event is causing rarely if ever collisions of stars themselves. However, giant gas clouds do crash into each other at high speed, leading to the formation of bright new clusters of very hot stars that are clearly seen in the picture.

The paths of the existing stars in the galaxies are also dramatically disrupted, creating the faint tidal tails extending to the upper left and lower right of the image.

The inconspicuous object just to the right of the brightest part of Arp 261 and close to the centre of the image is an unusual core collapse supernova, called SN 1995N, that is thought to be the result of the final collapse of a massive star at the end of its life.

SN 1995N is unusual because it has faded very slowly — and still shows clearly on this image, taken more than seven years after the explosion took place! It is also one of the few supernovae to have been observed to emit X-rays. It is thought that these unusual characteristics are a result of the exploding star being in a dense region of space so that the material blasted out from the supernova ploughs into it and creates X-rays.

This image also contains several other objects at very different distances from us. A small asteroid (number 9735) of probably less than 5 km across, from our Solar System, happened to cross the images as they were being taken and shows up as the red-green-blue trail at the left the picture. The trail arises as the object is moving during the exposures and also between the exposures through different coloured filters.

Much more distant, perhaps some fifty to one hundred times further away than Arp 261, lies the cluster of galaxies visible on the right of the picture. And, there are also many distant galaxies visible in the background of the image.

This colour composite image was created from images through blue, green, red and infrared filters, obtained using the FORS2 instrument on the ESO Very Large Telescope at the Paranal Observatory in Chile.