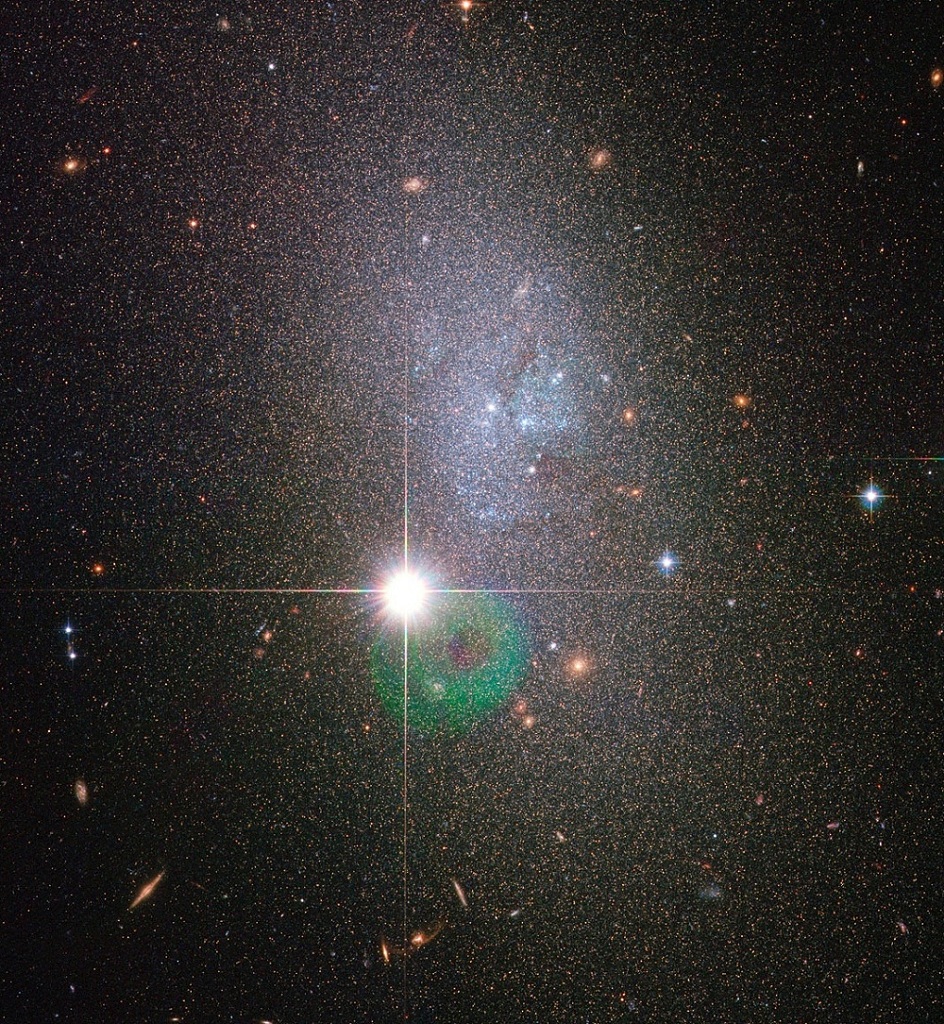 DDO 82 (also known as UGC 5692) is a dwarf galaxy located about 13 million light-years away in the constellation of Ursa Major (the Great Bear). It is a member of the M81 Group of Galaxies which consists of around three dozen galaxies.

DDO 82 has gotten its name from its entry number in the David Dunlap Observatory Catalogue. The galaxy was added to this list of dwarf galaxies in 1959 by the Canadian astronomer Sidney van den Bergh.

Relatively few galaxies possess the sweeping, luminous spiral arms or brightly glowing center of our home galaxy the Milky Way. In fact, most of the Universe’s galaxies look like small, amorphous star clouds, like DDO 82. Though tiny compared to the Milky Way, such dwarf galaxies still contain between a few million and a few billion stars.

DDO 82 is not without a hint of structure, however. Astronomers classify it as a Magellanic spiral galaxy, named after the Large Magellanic Cloud, a dwarf galaxy that orbits the Milky Way. That galaxy, like DDO 82, is said to have one spiral arm.

In the case of DDO 82, gravitational interactions with several other dwarf galaxies over the last billions of years seem to have deformed it so that this structure is not as evident as in the Large Magellanic Cloud. Accordingly, astronomers also refer to DDO 82 and others of a similar undefined shape as dwarf irregular galaxies.

The blue patches in the image are star clusters. Red and yellow stars along the outside are older stars. Peppered throughout the background are faraway galaxies. The bright stars are nearby stars that are part of the Milky Way Galaxy. The green halo near the star in the center is light playing in the optics of the Hubble Space Telescope.

This image was created with the Wide Field Channel of the Advanced Camera for Surveys on the Hubble Space Telescope, made up of exposures taken in visible and infrared light.