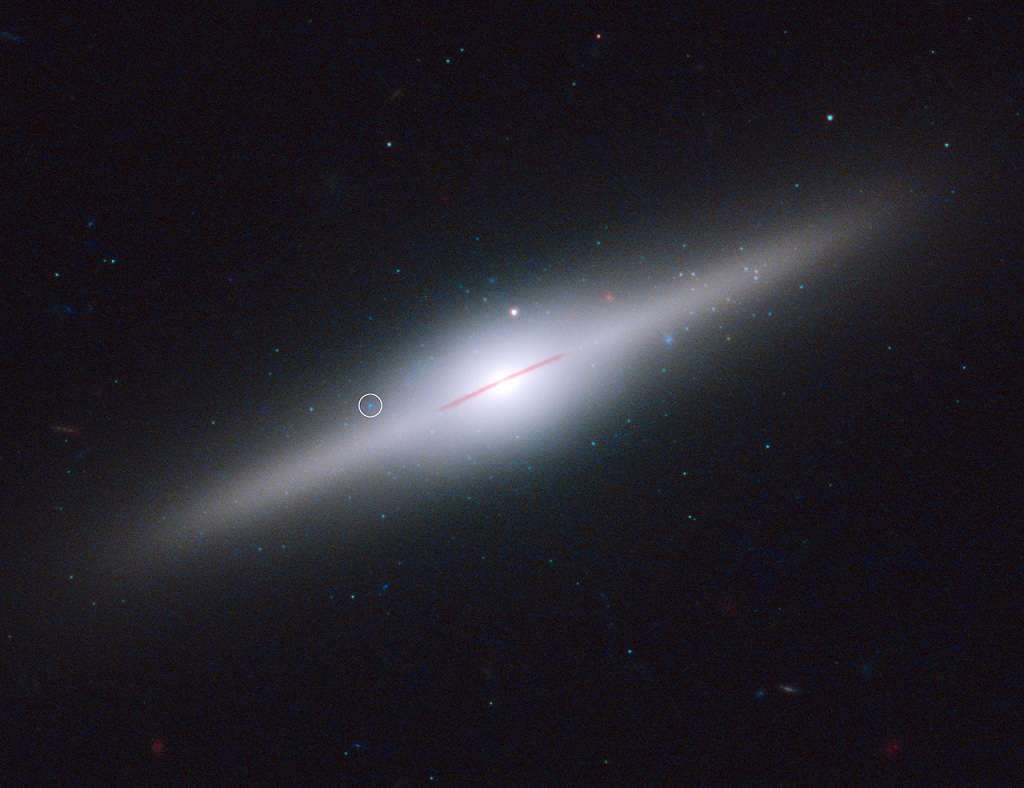 ESO 243-49 is a large edge-on spiral galaxy, located about 290 million light-years away from Earth in the southern constellation Phoenix. It is speeding away from us at about 6639 kilometers per second.

Towards the edge of the galaxy, above the galactic plane, astronomers discovered in 2009 one of the first intermediate-mass black holes ever found, probably devouring a companion star. Known as HLX-1 (Hyper-Luminous X-ray source 1), the black hole, surrounded by a swirling disk of hot gas, has an estimated weight of about 20,000 solar masses. The black hole may be encircled by a massive cluster of young, blue stars of about 250 light-years across.

Such young clusters of stars are commonly found inside galaxies like the host galaxy, but not at their edges, as found with HLX-1. One possible scenario is that the HLX-1 black hole was the central black hole in a dwarf galaxy. The larger host galaxy may then have captured the dwarf. In this conjecture, most of the dwarf’s stars would have been stripped away through the collision between the galaxies. At the same time, new young stars would have formed in the encounter. The interaction that compressed the gas around the black hole would then have also triggered star formation.

The possible star cluster may be less than 200 million years old. This means that the bulk of the stars formed following the dwarf’s collision with the larger galaxy. The age of the stars tells how long ago the two galaxies crashed into each other.

HLX-1 brightens and fades over a period of roughly 367 days. Its X-ray brightness increases dramatically in about 10 days, falls slowly over the next 100-200 days, then stays low until the next flare-up.

A possible explanation is that the accretion disk is fed by a star in an elongated orbit. When the star comes closest, the black hole’s gravity pulls gas from its surface. The gas funnels into the accretion disk, heating the disk and causing it to emit a burst of X-rays. Over the next few months, the black hole ingests some of the gas, so the disk fades. HLX-1 may get sucked into the center of ESO 243-49, feeding its monstrous black hole eventually.

The discovery of the possible star cluster and the black hole has important implications for understanding the evolution of black holes and galaxies, because it had not been clear whether middleweight black holes formed inside ancient star clusters or by repeated mergers of small galaxies. This finding not only suggests they grew by mergers, but it also hints they will keep merging. That could explain another mystery – how supermassive black holes got so big.

This image is created by using NASA’s Hubble Space Telescope. The circle identifies a unique X-ray source that pinpoints the black hole.