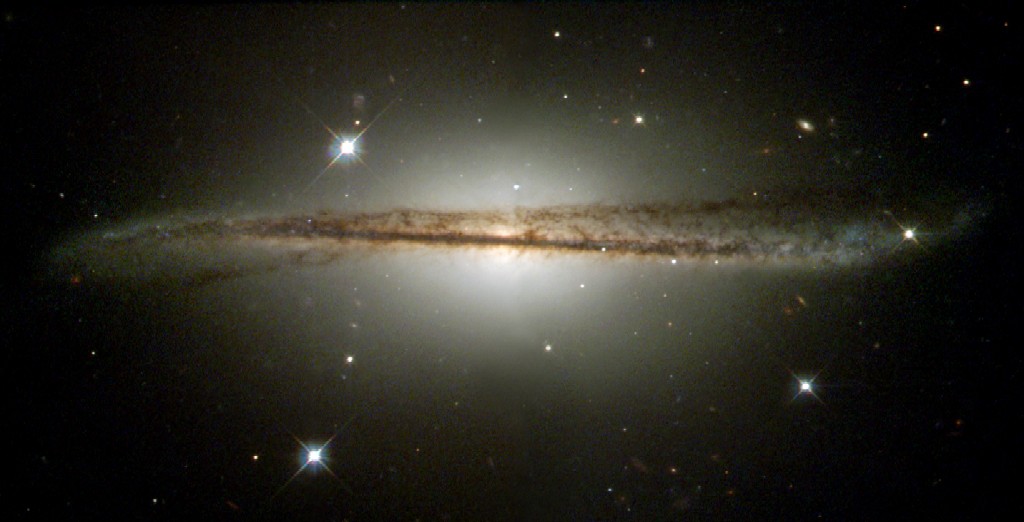 ESO 510-G13 is a heavily warped edge-on spiral galaxy about 150 million light-years away in the southern constellation Hydra. The galaxy illustrates that a galaxy’s disk is very fragile and can be easily distorted by gravity caused by interacting galaxies.

The most prominent features in this image are the galaxy’s heavily warped thin disk of stars, gas, and dust, its glowing central bulge, composed mostly of old stars, and its bright clusters of blue stars. The dark clouds of gas and dust in the disk stand out in this picture because they block the light of background stars, and because they are silhouetted from behind by light from the galaxy’s bright, smooth central bulge.

In the outer regions of ESO 510-G13, especially visible on the right-hand side of the image, the bent disk contains not only dark dust but also bright clusters of blue stars. These clusters are evidence that hot, young stars are being formed in the disk.

The strong warping of the disk indicates that ESO 510-G13 has recently undergone a collision with a nearby galaxy and is in the process of swallowing it. The formation of new stars is most likely triggered by this collision.

When galaxies collide, clouds of dust and gas smash together and are compressed in a process that takes millions of years, creating a favorable environment for star birth. Eventually the disturbances will die out, and ESO 510-G13 will become a normal-appearing single galaxy.

Much of ESO 510-G13 appears whitish because it contains stars of many different colors, which combine to create a white appearance in the image. However, near the dark band of dusty gas slicing through the middle of this galaxy, the starlight appears redder because the dusty gas blocks blue light more effectively than red light.