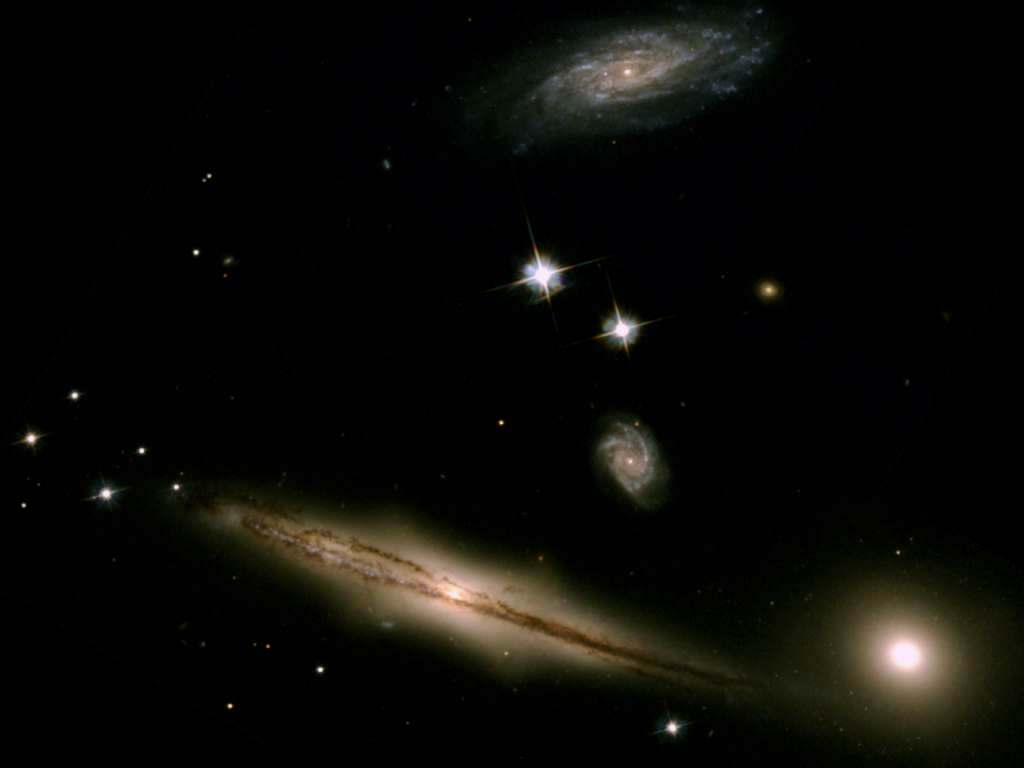 Hickson Compact Group 87 is a small group of gravitational bound galaxies, located about 400 million light-years away in the constellation of Capricornus.

Compact groups are relatively short lived entities, they slowly self-destruct. Simulations predict that merging of the group members should proceed rapidly within one billion years. Hickson groups are therefore snapshots at various stages in this merging process. They may represent an intermediate stage between loose groups and individual galaxies. A better understanding of the nature of HCGs could help explain galaxy formation on a larger scale in the early Universe. Compact groups are surprisingly numerous, and may play a significant role in galaxy evolution.

The small spiral (PGC 65414) near the center of the image, of about 35 thousand light-years across and some 455 million light-years away, is likely a more distant background galaxy. The deep image reveals other galaxies which certainly lie far beyond HCG 87. Several stars from our Galaxy are also visible in the foreground.

The complex dark bands across PGC 65415 are due to interstellar dust silhouetted against the galaxy’s background starlight. A faint tidal bridge of stars can be seen between the edge-on and elliptical galaxies.

The HCG 87 galaxies are interacting gravitationally, influencing their fellow group members’ structure and evolution. They are gravitationally stretching each other during their 100-million year orbits around a common center, and will most likely eventually merge to form a single bright elliptical galaxy.

The pulling creates colliding gas that causes bright bursts of star formation and feeds matter into their active galaxy centers. Two of the galaxies — PGC 65415 and PGC 65409 — contain active galactic nuclei, which are thought to harbor massive black holes that are consuming gas. Another galaxy, PGC 65412, is undergoing a burst of intense star formation.

The image was taken in 1999 by the Hubble Space Telescope’s Wide Field Planetary Camera 2, made by combining images taken in four different color filters in order to create a three-color picture. Regions of active star formation are blue (hot stars) and also pinkish if hot hydrogen gas is present.