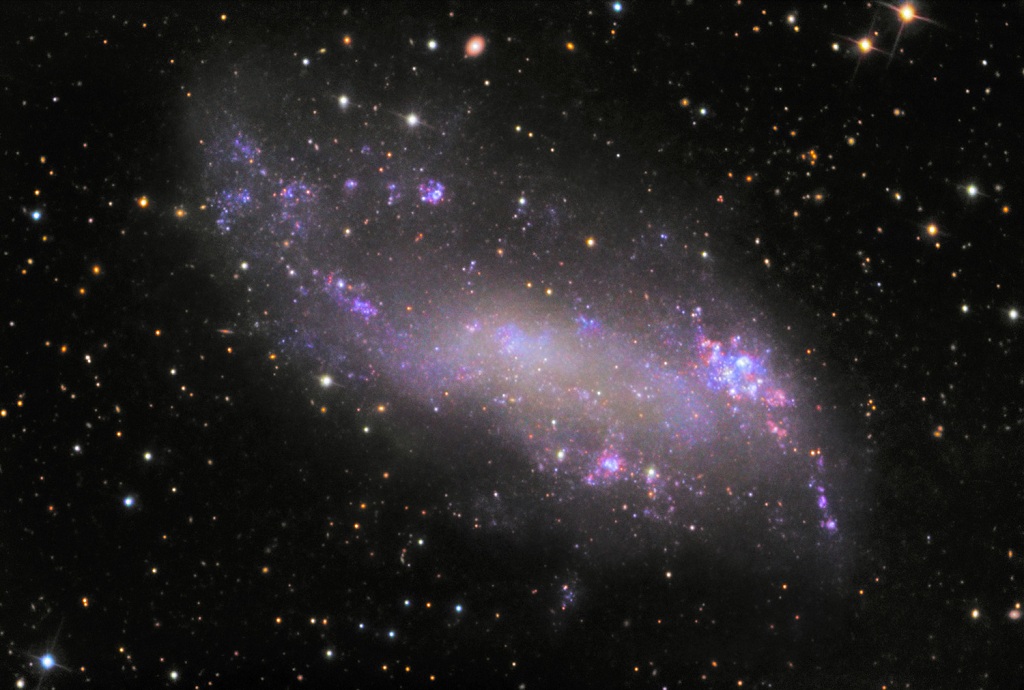 Coddington’s Nebula (IC 2574) is a faint dwarf irregular galaxy which is receding from us at a speed of just 55 km/sec. It is about 50 thousand light-years across and located some 12 million light-years away in the northern constellation Ursa Major. IC 2574 is a member of the Messier 81 Group of galaxies, named after the most prominent galaxy in its midst, the big spiral galaxy Messier 81.

Pinkish bubbles blown by supernova explosions abound in IC 2574. The colour of these shells comes from hydrogen gas irradiated by newborn stars. The formation of the stars was triggered by stellar winds and supernova explosions spewing material into the galaxy’s interstellar medium and triggering further star formation. The expanding (25km/sec) shells in IC 2574 are of particular interest to astronomers as they reveal how supernova-driven explosions ignite round after round of star formation.

IC 2574 has had several stellar baby booms. A new study suggests one burst of star formation occurred about 100 million years ago in the central region of the galaxy, while a later burst took place less than 10 million years ago within 13,000 and 26,000 light years from the galaxy’s centre.

A years-long study of radio radiation emitted by cold hydrogen gas, and the motions of gas and stars in IC 2574 show that most of the mass is not in the form of visible stars and clouds of gas, but in the “dark matter” that pervades all known galaxies and clusters of galaxies.