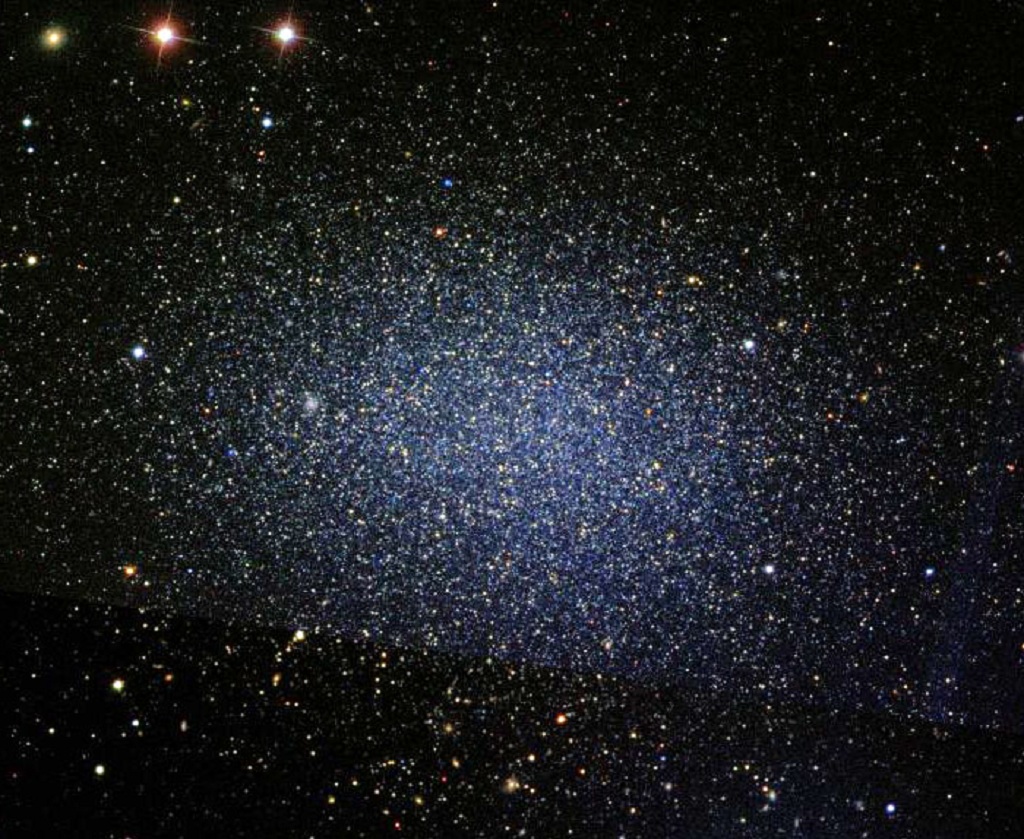 Leo I Dwarf Galaxy (also designated PGC 29488 and UGC 5470) is a dwarf spheroidal galaxy with a diameter of approximately 2000 light-years and a mass between 15 to 30 million times the mass of the Sun. It is located about 820,000 light-years away in the constellation Leo and is running away from us at a speed of about 285 km/s.

Leo I is a member of the Local Group of galaxies and is thought to be the most distant of the eleven known small satellite galaxies orbiting our Milky Way galaxy. It has been suggested that Leo I is in fact a tidal debris stream in the outer halo of the Milky Way, although this hypothesis has not been confirmed. It seems to be certain that the galaxy does not rotate. No globular clusters have been found in the galaxy.

Most of the stars in this dwarf elliptical are far older than the Sun, and have only 1% of the Sun’s already minor amounts of elements heavier than hydrogen and helium; but rather surprisingly, Leo I has quite a few stars of sufficient brightness to limit their lifetimes to only a billion or three years, implying that was an episode of star formation (accounting for 70% to 80% of its population) extending from around 6 to 2 billion years ago, most likely as a result of gravitational interactions with our galaxy.

There is no significant evidence of any stars that are more than 10 billion years old. About one billion years ago, star formation in Leo I appears to have dropped suddenly to an almost negligible rate, although some low-level activity may have continued until 200-500 million years ago. Therefore it may be the youngest dwarf satellite of the Milky Way. In addition, the galaxy may be embedded in a cloud of ionized gas with a mass similar to that of the whole galaxy.

Because of its proximity to Regulus — the brightest star in the constellation Leo and one of the brightest stars in the night sky — Leo I is sometimes called the Regulus Dwarf. Scattered light from Regulus makes studying the galaxy more difficult, and extremely difficult to view visually despite its considerably high total visual brightness.

This image is a composite of two images, with more detail in the top image, as indicated by a diagonal ‘line’ running across the lower part of the image.
Image Credit: WikiSky (snapshot based on Sloan Digital Sky Survey)