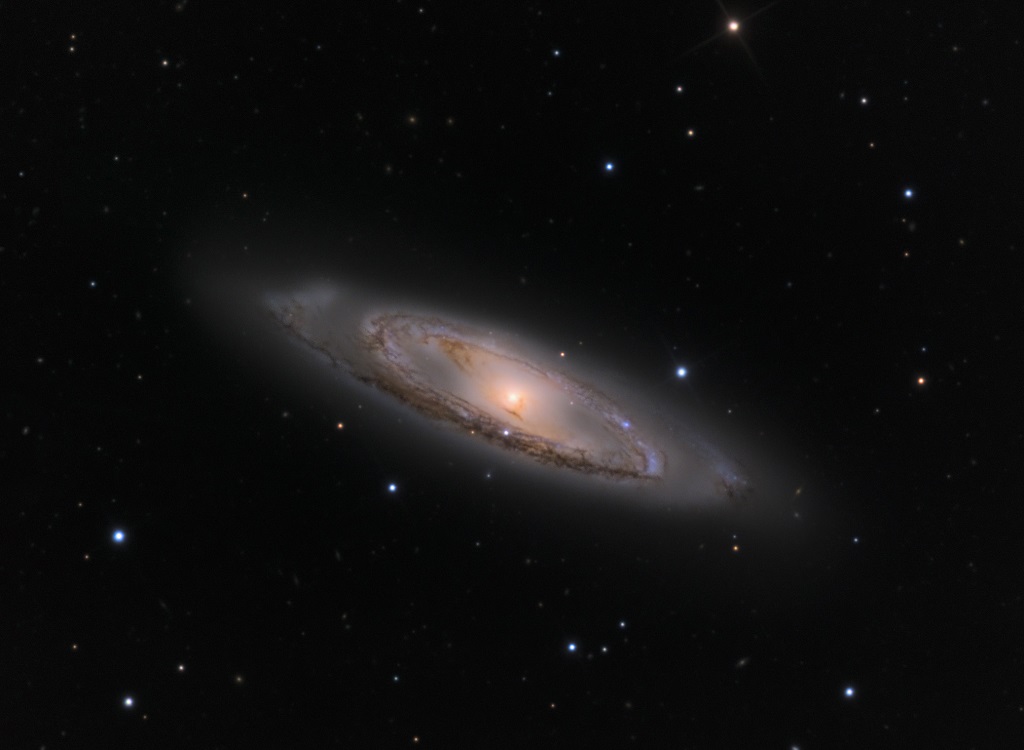 Messier 65 (also known as NGC 3623) is an intermediate spiral galaxy of some 100,000 light-years across that lies approximately 35 million light-years away from Earth in the constellation of Leo (the Lion), while it is receding from us at some 807 kilometers per second. It is a member of the famous Leo Triplet, a small group of interacting galaxies that includes Messier 66 and NGC 3628.

Highly inclined to our line of sight, Messier 65 has a prominent and bright central bulge and tightly wound spiral arms, plus a prominent dust lane marking the facing edge. As for the rest Messier 65 is low in dust and gas, and there is little star formation in it, although there has been some relatively recently in the arms.

Although it is under the gravitational influence of its neighbors, this galaxy seems to have felt little influence. However… one arm of the galaxy seems slightly warped, probably due to the interaction with its companion galaxies. Its relatively recent burst of star formation is also suggestive of some external disturbance, and Messier 65 may have a central bar, a feature which is suggestive of tidal disruption.

Its luminous disk is dominated by a smooth old stellar population. Near the dust lane, some knots are visible, which may be associated with star forming regions. The lane may hide regions of star formation usually associated with such features in spiral galaxies.

A Type II supernova results from the rapid collapse and violent explosion of a massive star. A star must have at least 8 times, and no more than 40–50 times the mass of our Sun for this type of explosion. It is distinguished from other types of supernova by the presence of hydrogen in its spectrum. Type II supernovae are mainly observed in the spiral arms of galaxies and in H II regions, but not in elliptical galaxies.

This image is taken on April 2nd and 3rd 2010 with a SBIG STL11000 CCD Camera on the 24-inch RC Optical Systems Telescope at the Mount Lemmon SkyCenter.