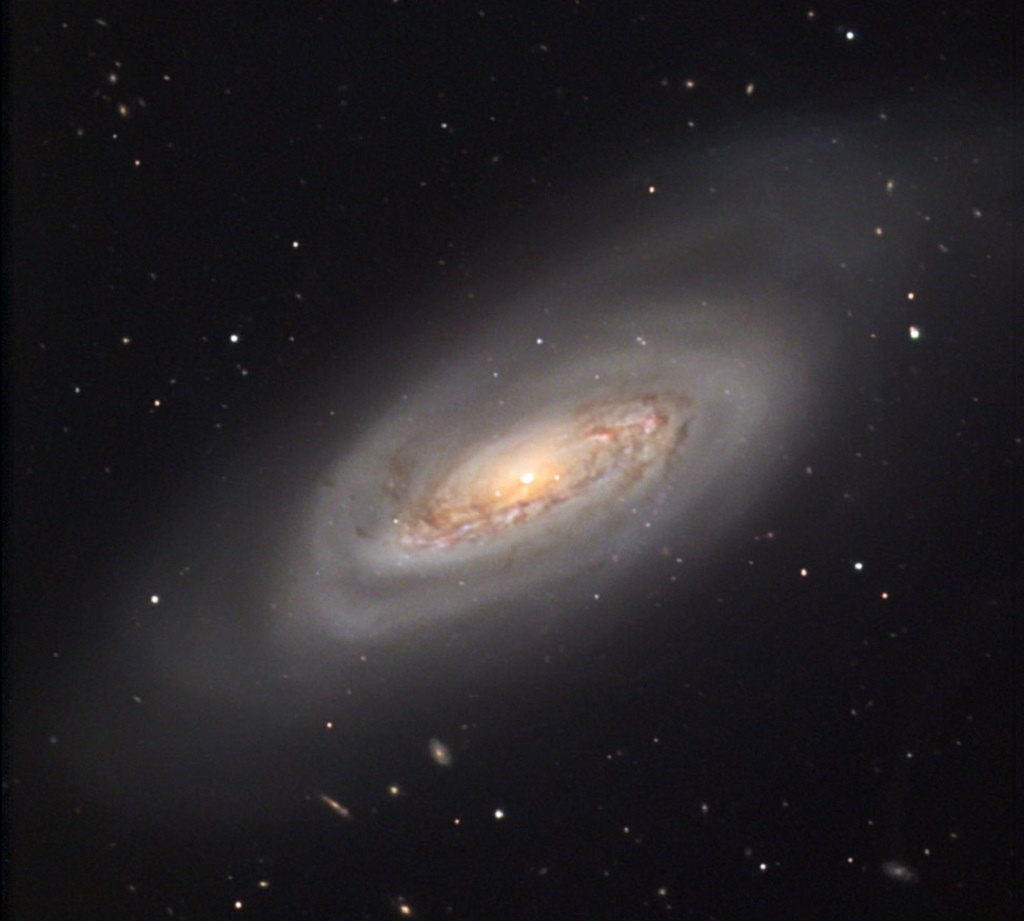 Messier 90 (also known as NGC 4569) is a large spiral galaxy of some 165 thousand light-years across, located about 60 million light-years away from Earth in the constellation of Virgo (the Virgin), while it is approaching us at approximately 235 kilometers per second.

It is one of the largest and brightest spiral galaxies in the Virgo Cluster, a cluster of some 1300 (and possibly up to 2000) galaxies. The Virgo Cluster is receding from us at a speed of 1100 km/sec, so Messier 90 is racing toward us through the cluster at more than 1300 km/sec, what means it has enough velocity to escape from the gravitational bonds of the Virgo Cluster.

Messier 90 has tightly wounded, smooth bright truncated spiral arms with a low density, which appear to be devoid of star formation. In fact, there are few bright pink star-forming (H II) regions in this galaxy with the only exception of the inner disk region, near the darker dust lanes, what appears to be a site of significant star formation activity. This galaxy is, however, rich in globular clusters, with around 1,000 of them.

In the center are around 50,000 relatively short-lived hot and massive stars that formed around 5-6 million years ago, surrounded by a large amount of white or bluish-white supergiants that were born in another starburst that took place before the former, between 15 and 30 million years ago. Already many of these massive stars in the nucleus have exploded in supernovae which produced ‘superwinds’ that are blowing the galaxy’s interstellar medium outward into the intracluster medium of the Virgo Cluster. As a result of this process, which is referred to as ram pressure stripping, the galaxy has lost much of its interstellar medium.

Because the star formation in Messier 90 appears truncated, this galaxy has been classified as the prototype of an anemic galaxy, an intermediate form between the gas-rich, star-forming spiral galaxies and the gas-poor, inactive lenticular galaxies. Sometimes it is even considered to be a passive spiral galaxy, a spiral galaxy located in rich galaxy clusters at high redshifts that present spiral structure, but little or no star formation. It is thought that Messier 90 may be on the way to evolve into a lenticular (S0) galaxy.

Most probably, Messier 90 is interacting with a satellite with which it comprises Arp 76: an irregular galaxy of about 40 thousand light-years across, called IC 3583 (not visible in this image), which is receding from us at some 1120 kilometers per second. Since their recessional velocities differ by some 1355 km/sec, they would not remain companions for long if they are actually companions now.

This image was obtained with the AOP’s 20in RC Optical Systems telescope Operating at f/8.4, Paramount ME Robotic Telescope Mount and SBIG ST10XME CCD camera with color filter wheel. It is a composite of four CCD images: Luminance = 105 min, Red = 20 min, Green = 20 min, and Blue = 20 min.