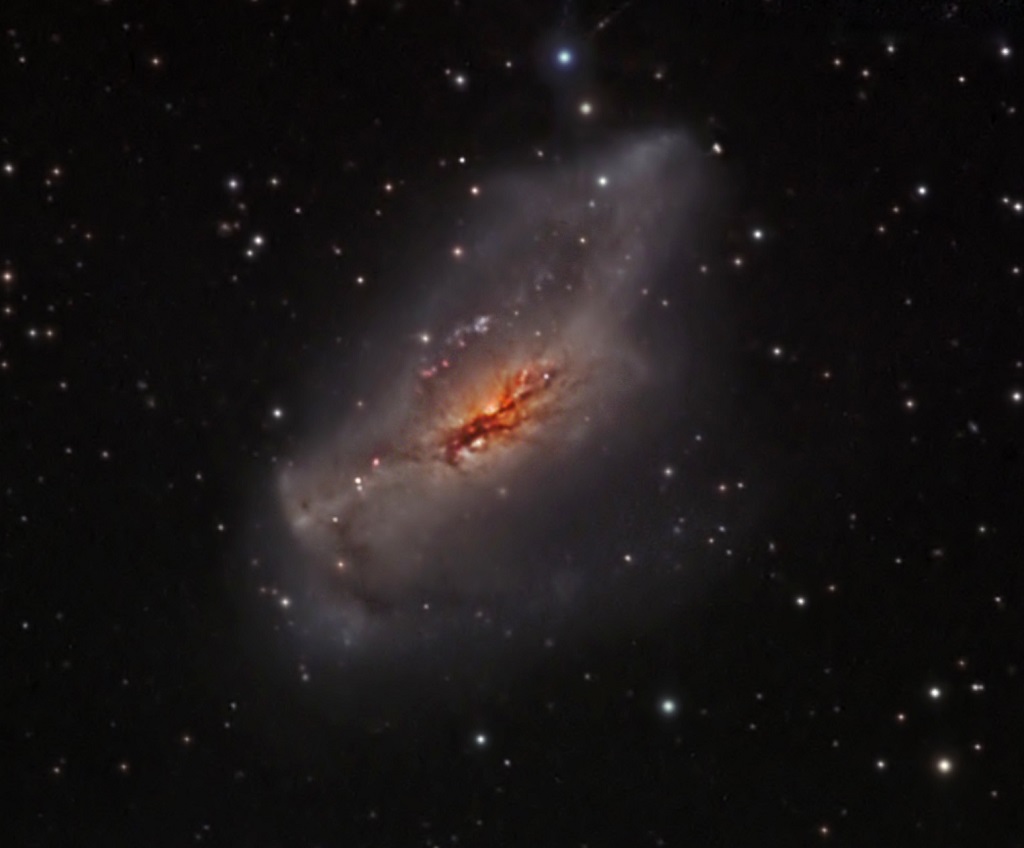 NGC 2146 is a barred spiral galaxy of about 80,000 light-years across, located some 70 million light-years away in the northern constellation of Camelopardalis (The Giraffe). It is receding from us at roughly 893 kilometers per second.

This galaxy with a large nuclear disk exhibits a warped tidal shape structure. The most conspicuous feature of NGC 2146 is the dusty lanes of an immense spiral arm that has looped in front of the galaxy’s core as seen from Earth. The forces required to pull this peculiar galaxy out of its natural shape and twist it up to 45 degrees are colossal.

The most likely explanation is that the strong tidal interaction of a companion galaxy is gravitationally perturbing NGC 2146 and distorting the orbits of many of its stars (possibly NGC 2146a, which is a smaller, nearby barred spiral galaxy, or to a collision with another galaxy which has merged with the larger galaxy, and is therefore no longer visible as a separate object). It is probable that we are currently witnessing the end stages of a process which started about 80 million years ago.

NCG 2146 is undergoing intense bursts of star formation, to such an extent that it is referred to as a very active “starburst galaxy”. The gravitational disruption that NGC 2146 endures is compressing hydrogen-rich nebulae and triggering stellar birth. This is probably the reason that this galaxy is a strong source of radio emission.

In January 30, 2005, the supernova SN 2005V has been witnessed in this galaxy. It was a type Ib/c supernova, what means that it was a stellar explosion that is caused by the core collapse of a massive star. This stars has shed (or been stripped of) its outer envelope of hydrogen.

NGC 2146 is fairly easy to see with a moderate-sized telescope as a faint elongated blur of light.