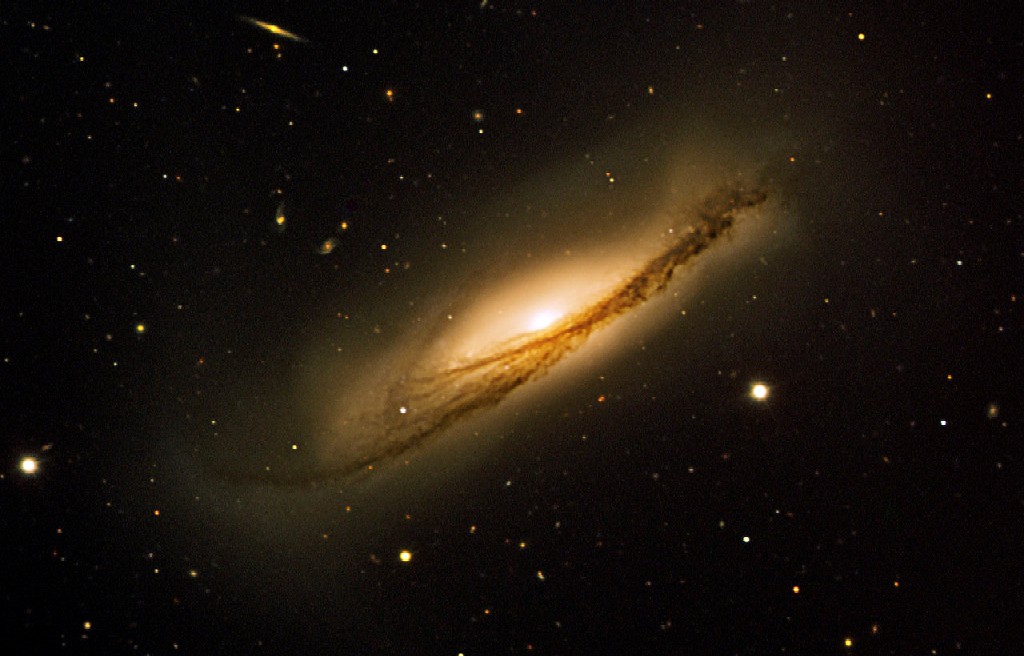 NGC 3190 is a spiral galaxy of about 75,000 light-years across, located around 79 million light-years away in the constellation of Leo, while it is hurrying away from us at roughly 1271 kilometers per second. It is the largest member of the Hickson Compact Group 44, a small galaxy group that also includes the elliptical galaxy NGC 3193 and the two barred spiral galaxies NGC 3187 and NGC 3185.

The galaxies in the Hickson 44 group are either slowly merging to form a giant elliptical galaxy, or gravitationally pulling each other apart. Anyway, NGC 3190 shows signs of gravitational interaction. Its dust lane is warped on the side nearer to NGC 3187, and there is also a very subtle smudge of light between NGC 3190 and NGC 3193, what seems to be a bridge of stars being shared between the two giants as they embrace in their cosmic dance (not visible in this image).

NGC 3190, that we see nearly edge-on, has tightly wound arms that appear asymmetric around the center, likely caused by gravitational tidal interactions with other members of the group, while the galactic disk also appears warped. Finely textured dust lanes are surrounding the brightly glowing, compact active galactic nucleus, that is thought to host a supermassive black hole. The galaxy is surrounded by a faint halo.

In March 2002, a Type Ia supernova (SN 2002bo) was found in between the ‘V’ of the dust lanes in the southeastern part of NGC 3190. It was caught almost two weeks before reaching its maximum brightness, allowing astronomers to study its evolution. The image presented here was taken about a year after the maximum of the supernova which is 50 times fainter on the image than a year before.

A Type Ia supernova is a result from the violent explosion of a white dwarf star (a compact star that has ceased fusion in its core). The white dwarf increases its mass beyond a critical limit by gobbling up matter from a companion star. A runaway nuclear explosion then makes the star suddenly as bright as a whole galaxy, before gradually fading from view.

This category of supernovae produces consistent peak luminosity. The stability of this luminosity allows these supernovae to be used as standard candles to measure the distance to their host galaxies because the visual magnitude of the supernovae depends primarily on the distance.

In May 2002, another Type Ia supernova (SN 2002cv) was discovered, on the other side of NGC 3190. Two supernovae of this type appearing nearly simultaneously in the same galaxy is a rare event, as normally astronomers expect only one such event per century in a galaxy. SN 2002cv was best visible at infrared wavelengths as it was superimposed on the dust lane of NGC 3190, and therefore hidden by a large quantity of dust. In fact, this supernova holds the record for the most obscured Type Ia event.

This image of NGC 3190, in which many background galaxies are also visible, is a colour composite based on images taken with the Very Large Telescope, obtained on 26 March 2003. North is up and East is to the left.