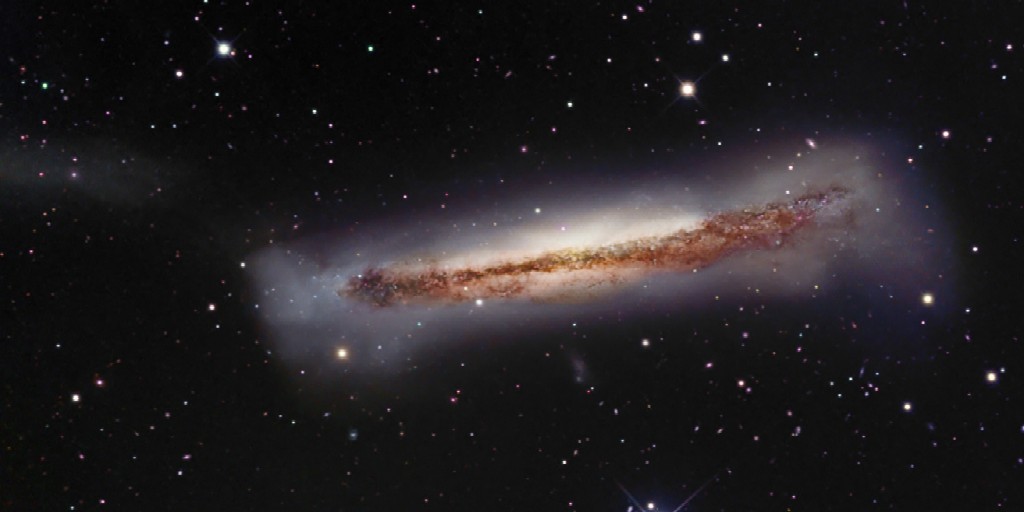 NGC 3628 (Sarah’s Galaxy) is an unbarred spiral galaxy, showing a puffy galactic disk divided by dark dust lanes, about 35 million light-years away in the constellation Leo.
It is similar in size to our Milky Way.

NGC 3628 is a remarkable, obviously disturbed galaxy, seen edge-on.
Its disk is clearly seen to fan out near the galaxy’s edge. This broad equatorial band obscures the galaxy’s bright central region, and hides most of the bright young stars in its spiral arms.

Along with M65 and M66 it forms the famous Leo Triplet, a triple group of galaxies. The gravitional pull of these neighboring galaxies has most likely tipped the plane of NGC 3628, and made its central dust lane “wobbled” in appearence.

An approximately 300,000 light-years long tidal tail, a faint arm of material, extends up and to the left. The distorted shape and tidal tail suggest that NGC 3628 is interacting gravitationally with the other spiral galaxies in the Leo Triplet.
Another indication therefor is that the stars orbit the galaxy in the opposite direction of the gas. It is surmised that recent galactic mergers generates these kinds of dynamics.