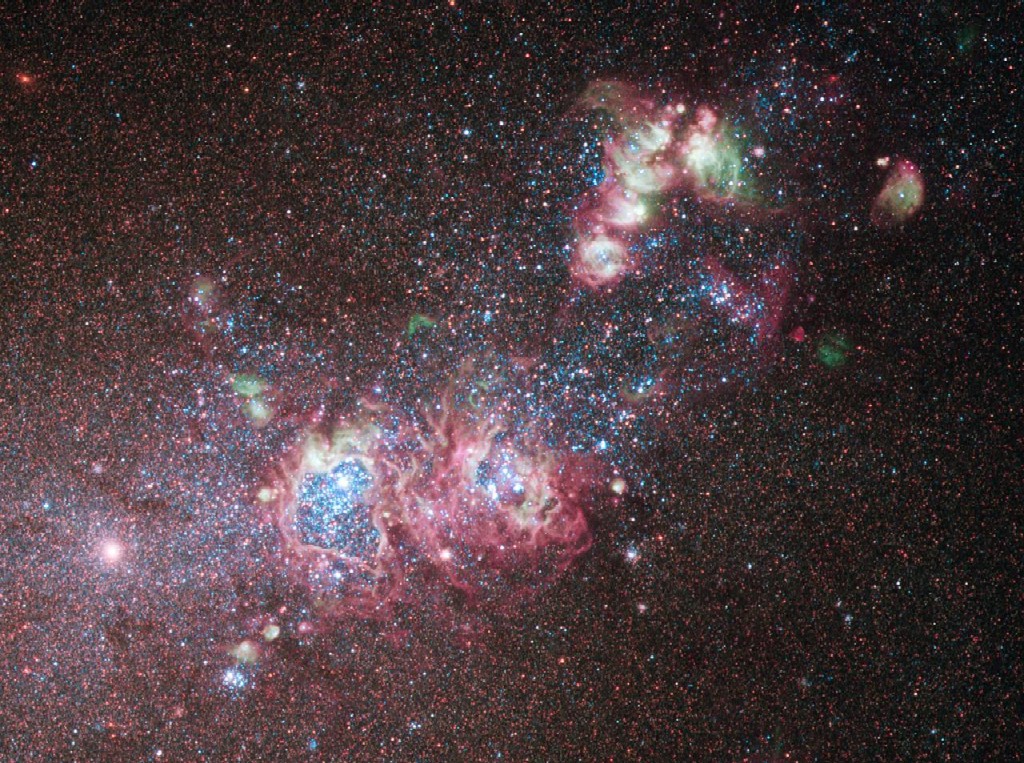 NGC 4214 (also known as NGC 4228 and UGC 7278) is an irregular dwarf starburst galaxy, located only about 10 million light-years away in the constellation Canes Venatici.

Dwarf galaxy NGC 4214 may be small, but what it lacks in size it makes up for in content. It is packed with everything an astronomer could ask for, like intricate patterns of glowing ionised hydrogen gas; hot, young star-forming regions; old clusters with red supergiants; and cavities blown clear of gas by stellar winds.

NGC 4214 contains a large amount of red glowing ionised hydrogen gas, providing abundant material for star formation. The area with the most gas, and consequently, the youngest clusters of stars (around two million years old), lies in the upper part of this Hubble image.

Dominating much of the galaxy is a huge cloud of hydrogen gas with a huge heart-shaped cavity at its centre. Inside this cavity lies a large cluster of massive, young stars ranging in temperature from 10,000 to 50,000 degrees Celsius. Their strong stellar winds are responsible for the creation of this bubble. The resulting lack of gas prevents any further star formation from occurring in this region.

Observations of NGC 4214 have also revealed clusters of much older red supergiant stars that we see at a late stage in their evolution. Additional older stars can be seen dotted all across the galaxy. While these are dominant in infrared emission they can only be seen shining faintly in this visible-light image.

The variety of stars at different stages in their evolution, indicate that the recent and ongoing starburst periods are by no means the first, and the galaxy’s numerous ionised hydrogen regions suggest they will not be the last.

The galaxy’s relative close proximity to us, combined with the wide variety of evolutionary stages among the stars, makes it an ideal laboratory to research what triggers star formation and evolution.