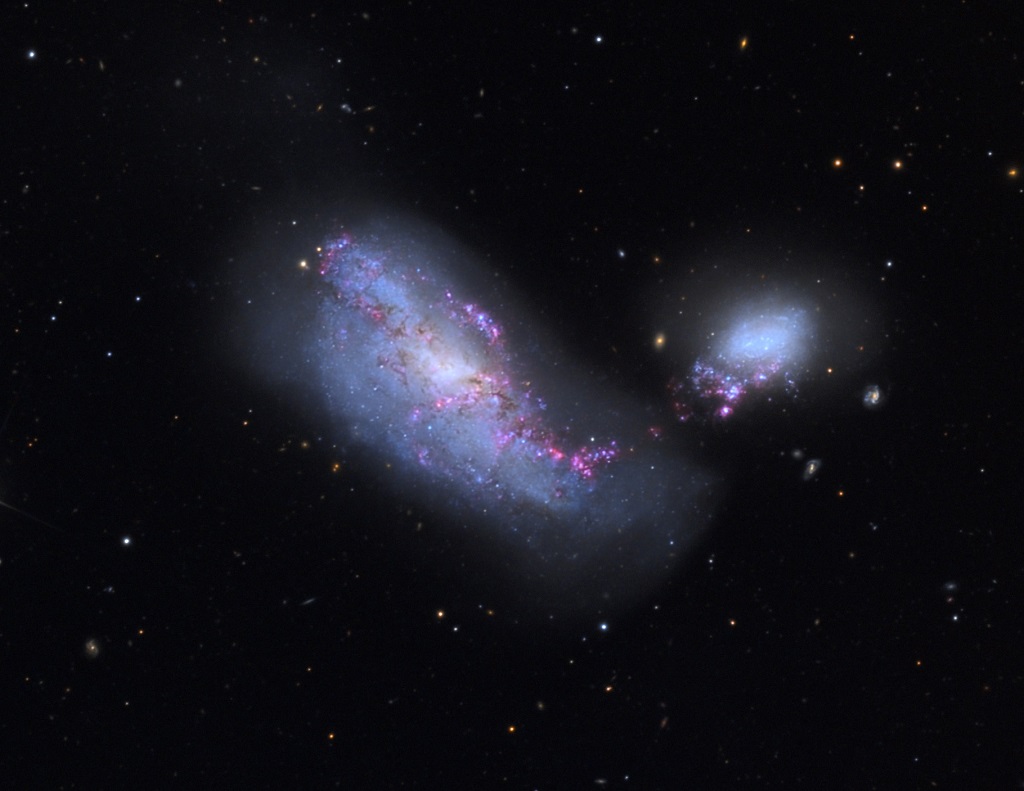 NGC 4490 (left) and NGC 4485 (right) are two interacting galaxies, located some 40 – 50 million light-years away from Earth in the small northern constellation of Canes Venatici (the Hunting Dogs), which have been severely warped by each other’s gravitation. Together they are also known as the Cocoon Galaxy or Arp 269.

NGC 4490, the large elongated galaxy is classified as a barred spiral galaxy and is receding from us at approximately 565 kilometers per second, while NGC 4485 is classified as an irregular galaxy that appears circular. NGC 4485 is receding from us at 493 kilometers per second. Long ago these two collided and created the distorted galaxies we see today.

NGC 4490 is believed to have a spiral structure with two arms which are hardly visible, but in NGC 4485 hints of a spiral structure are still evident. These galaxies have already passed their closest approach and are now speeding away from each other.

A bridge of stars is connecting the galaxies which are separated by at least 24,000 light-years. There are also faint tidal tails: one that emanates from NGC 4490, and one that spirals out from the bright regions of NGC 4485 toward the bridge. Due to the collision, an incredible number of star-forming regions and young star clusters have developed along the facing sides of each galaxy.

There exist several categories of Type II supernova explosions. A Type IIb supernova has a weak hydrogen line in its initial spectrum. However, later on the hydrogen emission becomes undetectable, and there is also a second peak in the light curve. The progenitor could have been a giant star which lost most of its hydrogen envelope due to interactions with a companion in a binary system, leaving behind the core that consisted almost entirely of helium. As the ejecta of a Type IIb expands, the hydrogen layer quickly becomes more transparent and reveals the deeper layers.

Between 2000 November and 2008 May, Chandra and XMM-Newton observations also discovered a rare high-mass X-ray binary system (named CXOU J123030.3+413853) in NGC 4490, consisting probably of a stellar mass black hole and a Wolf-Rayet star in a short orbital period. This would be the fourth system of this kind known in the local Universe.

Wolf-Rayet (WR) stars are extremely rare (only about 300 are known presently) and short-lived super-hot blue giant stars which start their lives with dozens of times the mass of our Sun, but rapidly loose most of it through a powerful stellar wind, with speeds of millions of kilometers per hour. They are also highly luminous, from tens of thousands to several million times the luminosity of the Sun, although not exceptionally bright visually since most of their output is in far ultraviolet and even soft X-rays. Often occurring in binary systems, they are doomed, within a few million years, to explode as supernovae.

This picture is created from images taken in March – April 2013 with a SBIG STX16803 CCD Camera on the 32-inch Schulman Telescope (RCOS) at the Mount Lemmon SkyCenter, using Astrodon Gen II filters with an exposure of: LRGB = 7:2:2:2 Hours. Guest Astronomers: Participants of the May 2013 CCD Image Workshop.