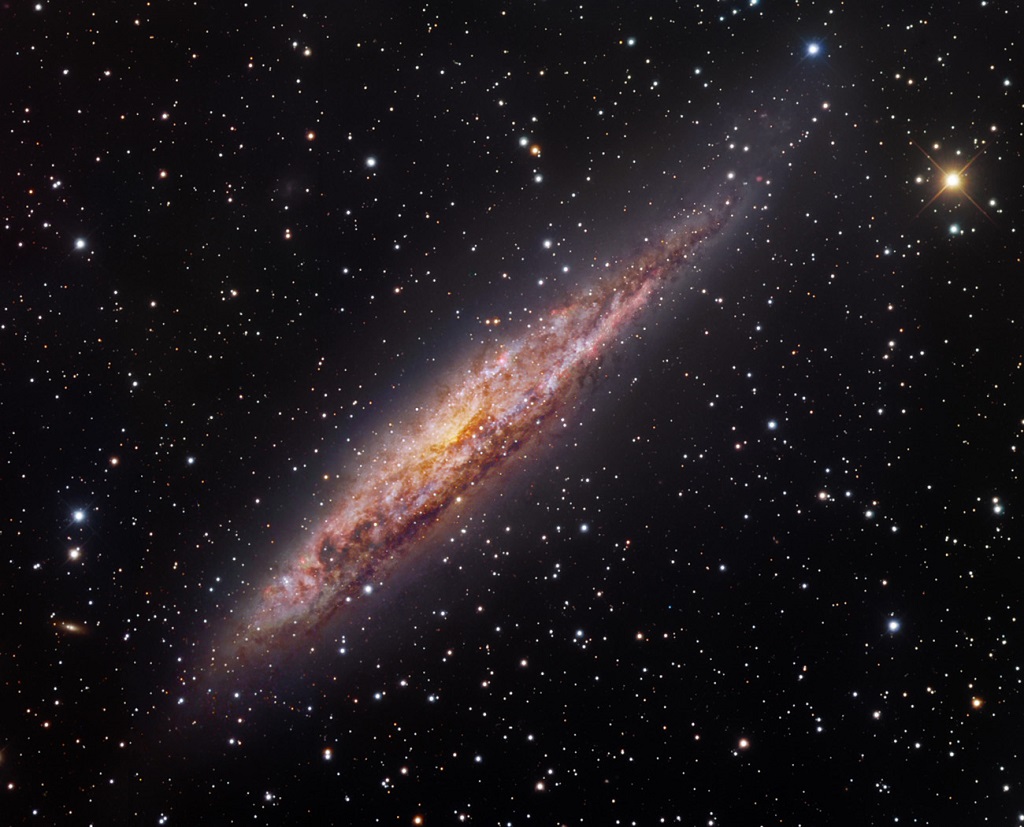 NGC 4945 is a barred spiral galaxy of some 80,000 across, located about 11,7 million light-years away in the southern constellation of Centaurus (the Centaur), while it is receding from us at approximately 563 kilometers per second. It is one of the brightest galaxies of the Centaurus A/M83 Group, a nearby group of 44 known galaxies.

Seen edge-on, this galaxy – discovered by the Scottish astronomer James Dunlop in 1826 – appears cigar-shaped from our perspective on Earth, but the galaxy is actually a disk many times wider than it is thick, with bands of stars and glowing gas spiraling around its center. It is thought to be quite similar to our own Milky Way galaxy, with swirling, luminous arms and a bar in its center. Pink areas of active star formation, known as HII regions, are seen prominently in the image.

NGC 4945 has, hidden in thick obscuring dust, an active galactic nucleus, meaning its central bulge emits far more energy than calmer galaxies like the Milky Way. The energy source of an active galactic nucleus is believed to originate in mass accretion by a supermassive black hole within the nucleus of the galaxy. NGC 4945’s bright center likely harbors a black hole of 1.6 million solar masses, which is devouring lots of matter and blasting energy out into space.

Black holes gravitationally draw gas and dust into them, accelerating and heating this attracted matter until it emits high-energy radiation, including X-rays and ultraviolet light. Most large, spiral galaxies, including the Milky Way, host a supermassive black hole in their centers, though many of them no longer actively “feed”.

NGC 4945 is classified as both a starburst and a Seyfert II galaxy (after the American astronomer Carl K. Seyfert).

Although it cannot be observed directly because of the obscuring dust and its edge-on orientation, astronomers have good evidence for a central bar within NGC 4945. A central bar provides a very efficient means of transporting gas inward towards its nucleus thus setting the stage for the formation of nuclear starbursts. The stars are sufficiently old enough to have enriched the galaxy with heavier elements and exotic organic compounds. The starburst ring lies within a compact 300 light-year torus (donut shaped structure) of molecular gas that surrounds the nucleus.

A modest telescope is sufficient for skygazers to spot NGC 4945 near the bright star Zeta Centauri, even though the thin disk galaxy is shrouded in dark dust. Most of the spots scattered about the frame are foreground stars in our own Galaxy, but some of them are globular clusters orbiting the distant galaxy.