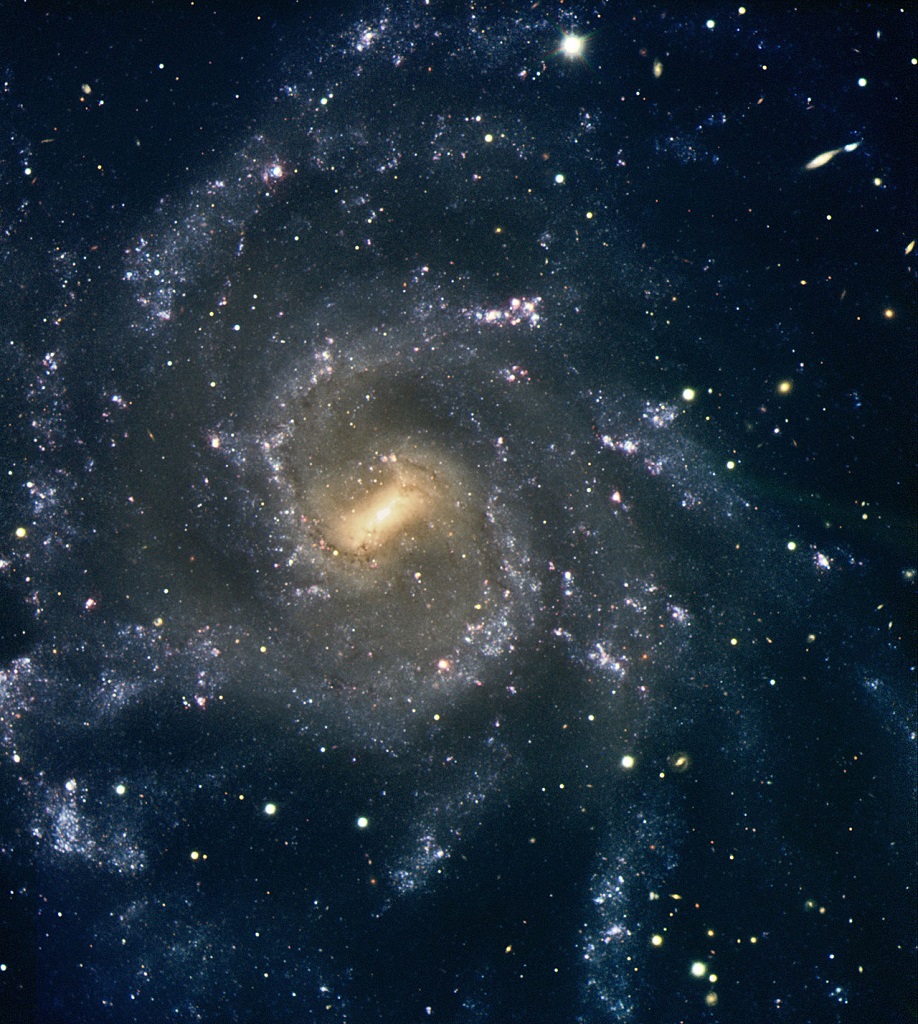 NGC 7424 is a barred spiral galaxy of some 100,000 light-years across, located about 37.5 million light-years away from Earth in the southern constellation of Grus (the Crane), while it is receding from us at approximately 939 kilometers per second. It is listed as a member of the IC 1459 Grus Group of galaxies, but is suspected of being a “field galaxy”; that is, not gravitationally bound to any group.

The multi-armed galaxy is seen almost directly face-on, and its structure and diameter make it quite similar to our own galaxy, the Milky Way. It is called a “grand design” galaxy because of its well defined spiral arms, and is classified as “SAB(rs)cd”, meaning that it is intermediate between normal spirals (SA) and strongly barred galaxies (SB) and that it has rather open arms with a small central region.

NGC 7424 has a very bright and prominent bar in the middle, of which its redder color indicates an older population of stars, while the bright blue color of the loose arms indicates the presence of ionized hydrogen regions as well as clusters of young and massive stars. Ten young massive star clusters can be identified whose size span the range from 1 to 200 light-years. Other features include the presence of a central ring-like structure and a relatively low core brightness relative to the arms.

On December 10, 2001, the Australian amateur astronomer Robert Evans discovered SN 2001ig, a rare Type IIb supernova on the outer edge of NGC 7424. At the time of its maximum, the supernova was only three times fainter than the whole galaxy. It must have been a splendid firework!

Type IIb supernovae initially exhibit spectral lines of hydrogen (like typical Type II’s), but these disappear after a short time to be replaced by lines of oxygen, calcium and magnesium (like typical Type Ib’s and Ic’s). The progenitor could have been a giant star which lost most of its hydrogen envelope due to interactions with a companion in a binary system, leaving behind the core that consisted almost entirely of helium.

It is now believed that indeed this supernova arose from the explosion of a very massive star, a so-called Wolf-Rayet star, which together with a massive hot companion belonged to a very close binary system in which the two stars orbited each other once every 100 days or so. The companion probably periodically stripped the outer hydrogen-rich envelope of the progenitor, accounting for the observed spectral changes, or the periodic mass loss was a result of the intense stellar wind these stars produce.

In May and June 2002, two Ultraluminous X-ray sources (ULXs) were discovered in this galaxy. ULXs are objects that emit tremendous amounts of X-rays, larger than currently understood stellar processes (including supernovae) but smaller than the amount of X-rays emitted by active galactic nuclei. The source designated ULX1 was found in a relatively empty interarm region, far from any bright clusters or star-forming complexes, and showed a 75% increase in X-ray luminosity over the course of 20 days. ULX2 was found in an exceptionally bright young stellar complex, and showed an order of magnitude increase over the same time period.

Because of its low surface brightness, NGC 7424 demands dark skies and a clear night to be observed in this impressive detail. When viewed in a small telescope, it appears as a large elliptical haze with no trace of the many arms.

This is a composite colour-coded image, based on images obtained with the multi-mode VIMOS instrument on the ESO Very Large Telescope (VLT) in three different wavelength bands. North is up and East is to the right.