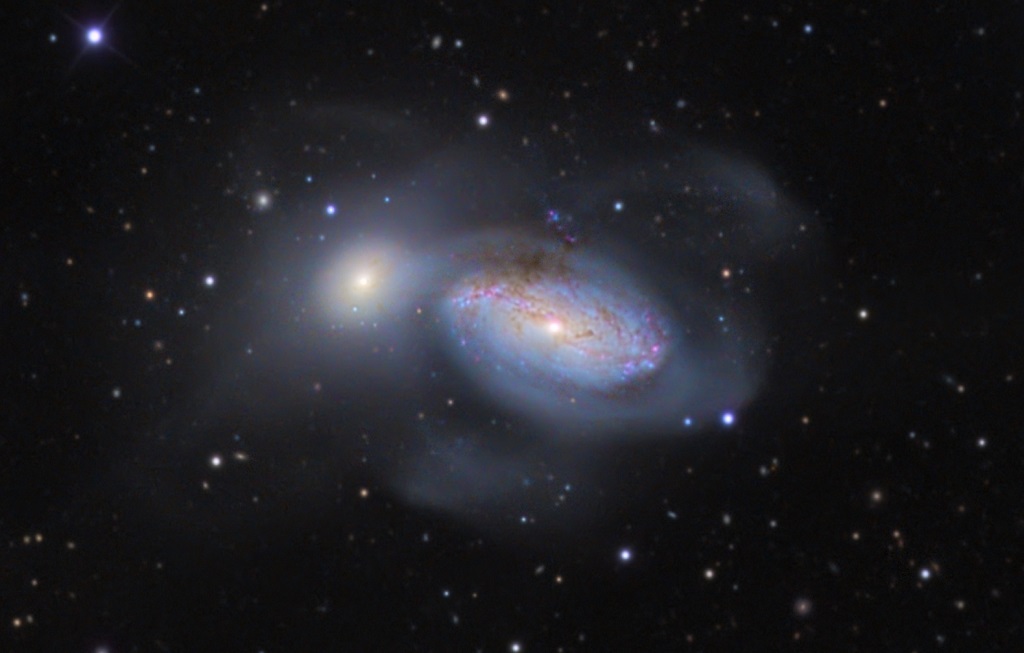 Arp 94 is a pair of interacting galaxies located over 50 million light-years away from the Earth in the constellation of Leo (the Lion). It consists of the large, unbarred spiral galaxy NGC 3227 of about 90,000 light-years across, and the smaller dwarf elliptical galaxy NGC 3226. The pair is receding from us at a little over 1150 kilometers per second.

The name “Arp 94” derives from being included in Arp’s Atlas of Peculiar Galaxies, a catalog of 338 peculiar galaxies, drawn up by Halton Arp in the years from 1962 through 1967 and published by the California Institute of Technology. Arp’s catalog was based only on the visual appearance of galaxies and groups of galaxies, and not whether they were actually physically related to each other.

The interaction between the galaxies of Arp 94 is visible as loops, arcs, and star streams that are the remnants of an ongoing gravitational dance between the two. But such galactic collisions and mergers are now thought to represent a normal course in the evolution of galaxies, including our own Milky Way.

A supernova occurs when a star explodes in the final phase of its life. Supernova explosions are enriching the intergalactic gas with heavy chemical elements like oxygen, iron and silicon, necessary to build new generations of stars and planets, and to create life.

The white dwarf of a Type Ia supernova increases its mass beyond a critical limit (the Chandrasekhar limit) by gobbling up matter from a companion star. A runaway nuclear explosion then makes the star suddenly as bright as a whole galaxy, before gradually fading from view. This type produces consistent peak luminosity. The stability of this luminosity allows these supernovae to be used as standard candles to measure the distance to their host galaxies because the visual magnitude of the supernovae depends primarily on the distance.