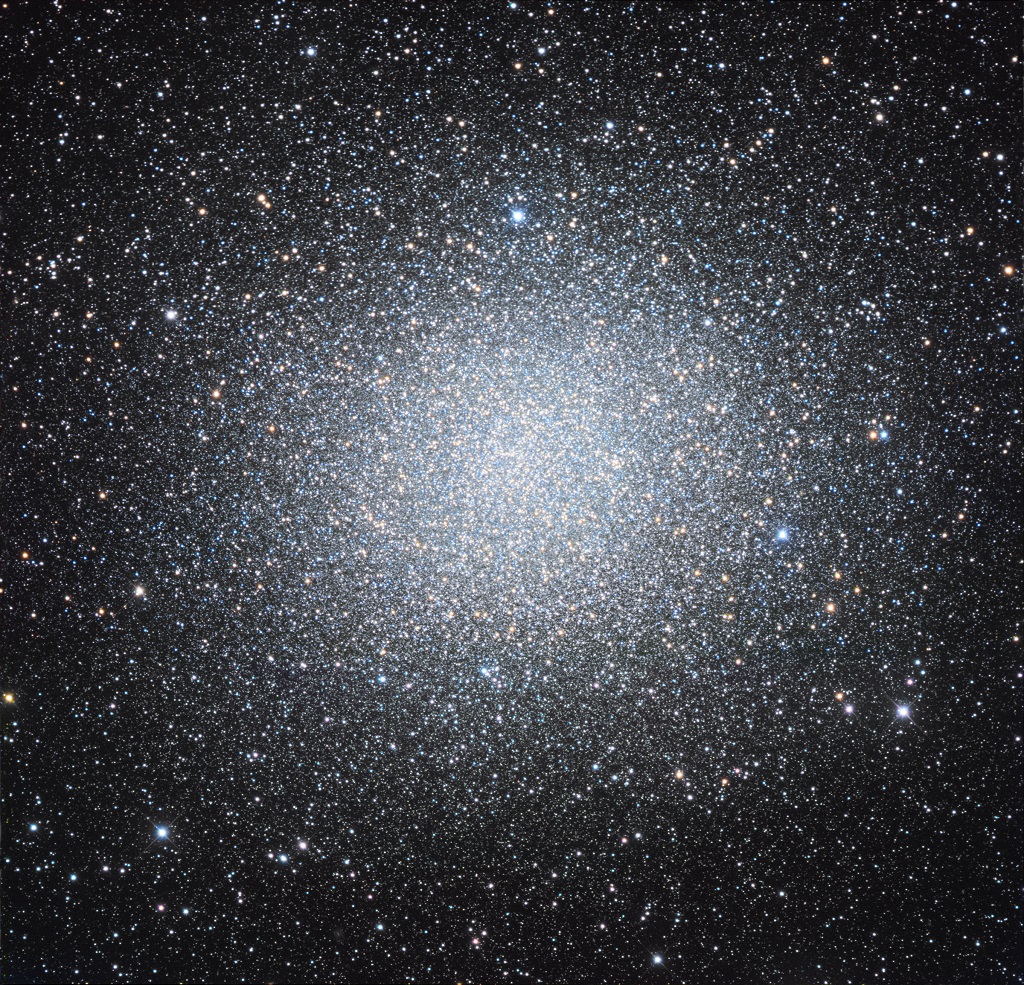 Omega Centauri (also known as NGC 5139) is a globular cluster of approximately 172 light-years across, located about 15,800 light-years away from Earth in the large, southern constellation of Centaurus (the Centaur). The cluster is estimated to be roughly 11.5 billion years old, and contains over ten million stars.

It is the brightest, largest and, with some 4 to 5 million solar masses, it is about 10 times as massive as other big globulars that are orbiting through our Milky Way galaxy, and it has about the same mass as the smallest whole galaxies. The stars in the core of Omega Centauri are so crowded that they are estimated to average only 0.1 light-year away from each other.

Most of the stars visible now in Omega Centauri are old, low-mass, faint and metal-poor stars. But, the cluster also contains more than 450 much brighter “red giants” (swelling stars at the end of their lives), and a substantial number of “blue stragglers” (relatively bright, hot stars with about twice the mass of their far more numerous companions, created by the collision of two stars in the dense central parts of the cluster).

This cluster is so distinctive from the other galactic globular clusters that it is thought to have an alternate origin as the core remnant of a dwarf galaxy, which was disrupted and absorbed by our Milky Way.

Studies from 1999 indicate that the stars of this cluster did not all form at once (as globular clusters are thought to form) but over a 2-billion-year period of time, with several starburst peaks. This was the first time that multiple populations of stars, with a range of metallicities and stellar ages, were found in a globular cluster. This indicates that Omega Centauri might be the remnant of a nucleus of a small galaxy which has merged with our Milky Way long ago.

The cluster is also unique in its rotational velocity. Most globular clusters have no net rotation, the stars they contain are simply moving around in random directions, under the influence of the overall gravity of the cluster and their nearest neighbors; but Omega Centauri is rotating at about 8 kilometers per second, and should complete one rotation every 15 to 20 million years.

Omega Centauri is one of the few globular clusters visible to the naked eye – appearing about as large as the full Moon.